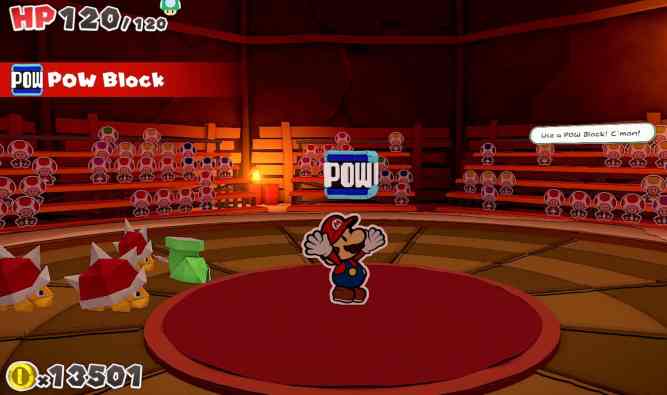 Nintendo’s latest trailer for Paper Mario: The Origami King finally unfolds how its ring-based battle system works, in addition to briefly touching upon companions. The near-six-minute video comes just less than a month before the game releases on July 17 for Nintendo Switch. Watch the breakdown below for a better idea as to how the battle system, characters, and origami setting all play into Paper Mario’s next chapter.

The battle system is maybe the most out-there inclusion in Paper Mario: The Origami King, even if it isn’t quite as complicated as it first seemed. Upon an enemy encounter, players are thrust into a wheel-like battlefield where enemies can be lined up (via spinning and sliding) for maximum damage. Essentially, the cleaner the lineup, the quicker Paper Mario can dispatch his foldable foes.

There are different origami monsters and a time limit to “offer a great challenge,” and there will be an element of strategy to it. Even more intriguing, bosses reverse the roles, putting evil crafting tools in the middle of the rings as Paper Mario makes his way to the center to attack.

Additionally, the trailer confirms that some companions can provide aid in battle, though they weren’t showcased as such in this video. The many paper allies found throughout the creative world of Paper Mario: The Origami King include a learned Professor Toad, Bobby the amnesia-stricken Bob-omb, magical Kamek, and Olivia, the sister of the Origami King.

In-between the ring-based combat, players will have the option to partake in mini-games and find a number of collectibles. The highlighted findables in this case were assorted hidden Toads, which are scattered across the game’s world, but players can also repair holes and find hidden items.

Paper Mario: The Origami King was only revealed one month ago and launches on July 17 exclusively for Switch owners.