First things first: a lot of developers throw words like “alpha” and “beta” and “early access” around, but actually just mean “paid demo”. Paragon‘s alpha, on the other hand, is an actual alpha. The core game is there, but a lot of the content is missing, and there are quite a few obvious placeholders. While that’s not necessarily a bad thing in it’s own right (if, for example, the game could be vastly improved with the addition of more content), in Paragon‘s case, I don’t really think any amount of additional content will save it from what it is: another bland entry into the ever crowded Multiplayer Online Battle Arena genre. 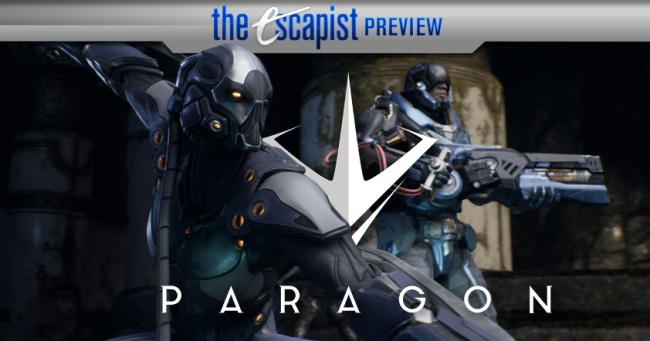 Paragon comes to us from Epic Games. These days, especially since good ol’ CliffyB left, Epic is more of an engine developer than a game developer – providing game devs with newer and better versions of the ever popular Unreal Engine. Paragon uses the latest such version: Unreal Engine 4, and as a tech demo to show off what UE4 can do, it’s brilliant! As a full game? Not so much.

The biggest problem of Paragon is that it doesn’t really do anything that hasn’t been done before. The map is set up almost exactly the same as League of Legends or DoTA 2; with three lanes, towers, minion waves, inhibitors, and plenty of jungle creeps. It uses the third-person over-the-shoulder perspective that SMITE poularized. It’s set in the same kind of generic science-fiction world as Unreal Tournament or StarCraft. Each hero has three special abilities, and one “ultimate” ability on a long cooldown. The list goes on.

In terms of stuff I’ve never seen before, “Harvesters” – which players can purchase and place on resource nodes within the jungle, and a bit of an interesting twist on combat by allowing players to actually use the terrain, notably height and depth, to their advantage. Harvesters are not super interesting and essentially simply turn into another jungle camp to capture. Being able to use height to ambush opponents is definitely fun and interesting, but isn’t too different from say, ambushing someone from the jungle in LoL.

Keep in mind, this isn’t to say that the actual core game sucks. It is solidly built. The world is beautiful, the heroes are animated, designed and voiced quite well, and the core game mechanics work. I ran into very few bugs or glitches, and in terms of fairness, it all seemed fairly balanced. The only thing that I really disliked was the “card” system. Instead of having a solid currency amount, you are awarded “card points” upon earning a certain amount of “card XP”, which you can use to purchase cards (items) that alter your hero’s stats. It was super confusing at first, and the game did not do a great job of explaining how it worked.

The heroes, while looking great, all feel fairly generic. You’ll encounter the exact same hero archetypes you have played a million times in other games, but in Paragon their abilities feel bland, and don’t really seem to have that much impact. Heroes are also quite slow and clunky, so even with the out-of-combat movement boost ability, you will just kind of stumble around the game’s gigantic map all game. Speaking of which, an average game lasted me 40 minutes, with longer games taking over an hour. Going from Heroes of The Storm‘s 20 minute matches to this was quite a shock.

Paragon is a perfect example of what not to do when attempting a genre with as fierce loyalties as the MOBA. MOBA players don’t want to play a blander version of the game they are already playing – they will just stick with the one they have. The only way to get noticed is to bring something exciting and different to the table. Paragon looks beautiful, and makes me want to play more games built in Unreal Engine 4, but doesn’t make me want to play Paragon. As it is still an early alpha build, maybe Epic will be able to turn it around, but I don’t really see that happening.