Some horror fans bit off a little more than they could chew at this year’s Fantasia Fest, requiring medical attention after viewing a screening of Bite.

It’s a news story that horror fans have heard countless times before: A studio releases a movie so heart-stoppingly terrifying, so gut-bustingly disturbing, that it has audience members fainting and vomiting in the aisles by the dozens. The theater showing the screening is eventually forced to call 911 to contain the chaos. The paramedics who arrive turn out to be zombies in disguise and devour the theatergoers whole.

That last part may be a bit of an exaggeration, but let’s not act as if this scenario isn’t a marketing gimmick as old as the horror movie itself. V/H/S used it. So did Saw III. The Exorcist was perhaps the first horror film to use it, and for good reason. It’s a brilliant scheme to hype a movie, whether ultimately true or false, because horror fans are a bunch who quite literally live for the thrill. They are drawn to extremes, and as such, it would be hard to imagine many of them passing up the chance to see Bite, the latest horror film that is literally scaring people to death (or something close to it).

Bloody-Disgusting passes along word from this year’s Fantasia International Film Festival, where a screening of the Kafkaesque insect film Bite caused two people to faint, another to vomit, and another to “hit his head on the stairs” — presumably while running out of the theater to avoid puking. 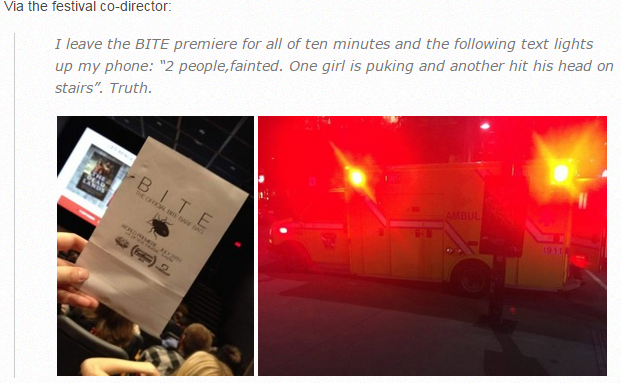 You can check out the Bite trailer above. I’ll always attest that if you’ve seen A Serbian Film, you’ve seen the furthest possible limits of human depravity, but what do you guys think? Is Bite the next great entry in the gross-out cinema cannon?

For those of you looking to put your money where your mouth is, Bite will be playing in London at the end of the month for Film4 FrightFest.

Pay What You Want For The Ultimate Video Game Developer Bundle

These 5 Movies Are Guilty Pleasures That Make Guys Cry