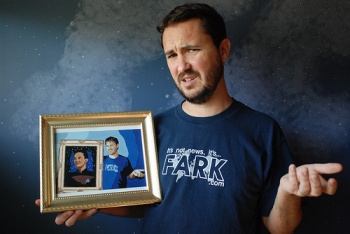 Actor and geek tribe chieftain Wil Wheaton kicked off the first Penny Arcade Expo East with a keynote address in which he welcomed the assembled throng “home”.

Once upon a time, Wil Wheaton was known best for being the lad nerds loved to despise – Wesley Crusher, the boy wonder who could do no wrong in Star Trek: The Next Generation. These days, as a geek icon in his own right (and perfectly aware of how unlikeable his old character was), Wheaton stood before an assembled crowd of geeks, nerds, and gamers and announced that it was his privilege and pleasure to say two words: “Welcome Home.”

This wasn’t the first time Wheaton had given a PAX keynote – he’d addressed the original Seattle “PAX Prime” back in 2007, and referred back to that keynote. Back then, said Wheaton, he’d disputed the notion that gamers like him (and like us all) were antisocial psychopaths. When he had to defend gamers and their hobbies to ignorant fools, he admitted (half-jokingly), he got “a little stabby.” But since that address just three years ago, said Wheaton, 168,000 gamers had attended PAX Prime. Millions had attended conventions all over the world.

The gaming culture had grown so enormously, Wheaton exclaimed, that just one city couldn’t hold it anymore. And while he’d planned to open by saying that infamous ex-lawyer Jack Thompson could “suck [his] balls,” he’d decided against it – because “the truth is, nobody gives a sh*t about Jack Thompson anymore.”

“He and people like him were wrong about us,” said Wheaton. “They were wrong about everything. They lost every fight they picked with us in the court of law and public opinion because we refused to be the caricature they claimed we were.” So now, he said, he doesn’t feel stabby anymore – because there were 50,000 gamers who had come to Boston in March to play gmes together.

Wheaton threw out some gaming references to see how many different generations were in attendance – “It is very dark,” “You have died of dysentery,” “Roll initiative,” I play Dark Ritual and Black Lotus and summon a Sengir vampire,” – all of which grew cheers from the crowd. “We may be from different generations, from a generation who never had to calculate Thac0 to a generation who wrote entire systems so our children wouldn’t have to… we are all here, all of us, because we are gamers and for the next 72 hours, this is our time.”

The actor then discussed how he’d initially turned down Penny Arcade’s original request to keynote PAX East ’10, and how he didn’t know what he would talk about – but then it hit him, unsurprisingly enough, while he was playing a game. “Gaming is the foundation of the best friendships I’ve ever had, it is the mortar that has held my group of friends together. So we are all here today because we love playing games. Some of the happiest days of our lives would not exist without playing games. Games are important. Games matter. PAX is where we come to celebrate that.”

He referred back to his time as Wesley Crusher, saying that he wouldn’t have been able to harness his imagination as an actor and writer without growing up playing games. On Star Trek, he said, the big alien menace that audiences saw after the Visual Effects team did their thing was – to the actors – just a piece of red tape in an X if they were lucky. “But it wasn’t difficult for me [to imagine something scarier] at all. I’d been using my imagination to create adventurers and monsters, spaceships and aliens since I’d sat on the floor on 1983 on Christmas morning at my Aunt Val’s looking at a red box with a big dragon on it.”

Though he’d initially been disappointed when he’d opened what was supposedly a game and found only books and charts, Dungeons and Dragons eventually captured the young Wheaton’s imagination with its promise that it was a game that “helps you imagine.” And within weeks he’d had an “entire Trapper Keeper” filled with people that he’d created with a handful of funny dice and his imagination. Now, almost three decades later, Wheaton admitted he didn’t remember the names or how they died (what with 1d4 hit points on the wizards and all) but he just remembers how much fun he had creating them. During an abnormal childhood, he said, those books were his choice – they were his normal. He didn’t have the internet or PAX to let him know that there were other kids who carried character sheets around with them too; that it wasn’t weird or stupid.

“That red box was the trailhead on the path that led me here today,” said Wheaton from his podium. “It rewarded me and countless shy, awkward kids like me for daring to imagine.”

It was that imagination and desire for immersiveness that led him to choose the sit-down versions of games like Spy Hunter or Pole Position at his local arcade. His kids, he continued, didn’t have to let their imagination do quite so much heavy lifting thanks to the power of consoles like the Xbox 360, more powerful than every gaming device he owned back then all put together. “Their immersive gaming is the Space Shuttle to my Paper Airplane.” And while a little part of him died when his 17-year-old son hadn’t been impressed by old Infocom games, he admitted, “I can’t blame him for not understanding why the Lurking Horror scared me as much as anything in Silent Hill or Dead Space.”

These days, says Wheaton, with games being able to realize locations like Liberty City or Rapture, his imagination “could focus on bringing the story to life since the world is already there. [My son] can take it for granted because I was there before him.”

Games have come a long way from Pitfall to Portal, said Wheaton, and he’d had a “front row seat.” He talked about the beloved Valve FPS as an example. Even though the only voices the player ever hears belong to GLaDOS and the turrets, and even though the only object we ever interact with is the Companion Cube (he poured out a libation in memoriam), “we know that there is a world outside. We know there is something going on outside Aperture Science because our imagination does what it must – because it can.”

“When you play a game – any game – you are using your imagination to bring a world to life,” emphasized Wheaton. “All destruction is the same, but when you create something it is different every time. When you create something together, you are building bonds with fellow gamers that could last entire lives. These worlds exist because we choose to visit them. We make them real.”

Games like Rock Band can let him and his friends create a world where they’re the rock stars they could never be in real life in front of an arena of thousands of screaming people. To the haters, he said, “We get it, we know, we’re having too much fun to care.” Wheaton referred to the story where an NFL player had run parallel to the goal line to run out time – a move pioneered in Madden. “You can divide the world into people who didn’t know what the f*ck was going on, and gamers who were standing up screaming about it!” That player was just one of countless people who were inspired by video games.

Though he is an actor who was inspired by films and television, and who adores The Lord of the Rings, Wheaton said that he’d used a precious 12-hour stretch at home to himself not to rewatch the Peter Jackson trilogy but to play Dragon Age – because he wanted to know what happened next. “When faced with a choice between watching a fantasy epic unfold with an ending I already knew, and affecting how one unfolded with an ending still shrouded in mystery, where I could focus how the story went? That’s not a choice at all.”

He mentioned a (rather spoiler-y) situation near the end of Dragon Age where his choices caused a party member to leave his group for good. Even though it was a game, “I felt tremendously, physically sad, the time I felt the first time Gandalf fell off the bridge of Khazad-Dum. I wasn’t just a spectator, I had a direct hand in the events unfolding.”

When he’d been a kid, Wheaton had wanted to be an actor because of movies, he said. But now as a storyteller, he found inspiration more and more in games, and hoped from the bottom of his heart that someone else in the room would do the same. “I hope, I really hope, that someone in this room who hears [this speech] will find inspiration in a game. And that person will get excited and make something. You could be the next Gary Gygax. You could be the next Miyamoto. You could have an incredible, positive, enduring difference in someone’s life because you play games together.”

Conventions were the original social media before Facebook and Twitter, said Wheaton, when fans of science fiction gathered in hotel ballrooms to talk about their shared obsessions. That gave way to wargaming together, which birthed playing tabletop RPGs together, and then computer games – and then conventions like PAX.

“All of the things that make us weird and strange in the ‘real world,’ that people tease us for loving… these things make us who we are, and at PAX we don’t have to hide or explain or justify them to anyone. We have come here this weekend, and we will go to Seattle in five months and come back here in a year and the year after that and the year after that because playing games isn’t as fun as playing them together surrounded by thousands of people who love them as much as you do.”

Giving some advice to convention-goers (wash your hands, take showers), he exhorted everyone listening to take the time and appreciate everyone else at PAX, and then repeated his original opening. For all the Nintendo fanboys, Sony fanboys, Microsoft fanboys, liberals and conservatives, religious believers of all kinds and atheists, Alliance and Horde – we were all gamers there. “Welcome home.”