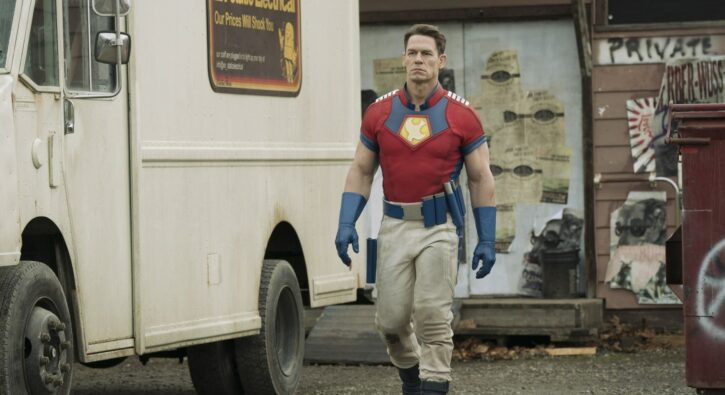 This discussion and review of Peacemaker episode 4, “The Choad Less Traveled,” on HBO Max contains some spoilers.

The relationship between parents and children is one of the great themes in art across culture. As poet Philip Larkin effectively summarizes, “They fuck you up, your mum and dad.” This generational tension is one of the driving forces of the Star Wars franchise. It also simmers through a lot of classic superhero stories, with heroes like Superman, Batman, and Spider-Man all defined by their relationships to idealized absentee fathers or father figures.

It is also a recurring fascination of writer and director James Gunn. Guardians of the Galaxy featured the first appearance of Josh Brolin as Thanos, marking the first time the character became an active part of the Marvel Cinematic Universe rather than a nebulous threat. The film explored the broken relationship between Thanos and his two adopted daughters, Gamora (Zoe Saldana) and Nebula (Karen Gillan). Both had been abused by Thanos and reacted to that violence in different ways.

In Guardians of the Galaxy Vol. 2, Peter Quill (Chris Pratt) reunites with his biological father Ego (Kurt Russell). However, Ego ultimately only sees Peter as a means to an end, a vessel through which Ego might consume the larger cosmos. Ultimately, Peter confronts and defeats Ego. In doing so, Peter reconciles with his surrogate father figure, the former Ravager Yondu (Michael Rooker). “He may have been your father, boy,” Yondu summarizes of Ego, “but he wasn’t your daddy.”

In The Suicide Squad, characters are frequently defined by difficult parental relationships. Ratcatcher 2 (Daniela Melchior) loved her father (Taika Waititi) but was abandoned on the streets when he overdosed due to his drug addiction. Polka-Dot Man (David Dastmalchian) is the result of experiments conducted by his mother (Lynne Ashe) on her children in the hopes of “turning (them) into superheroes.” Polka-Dot Man is haunted throughout the film by visions of his mother. 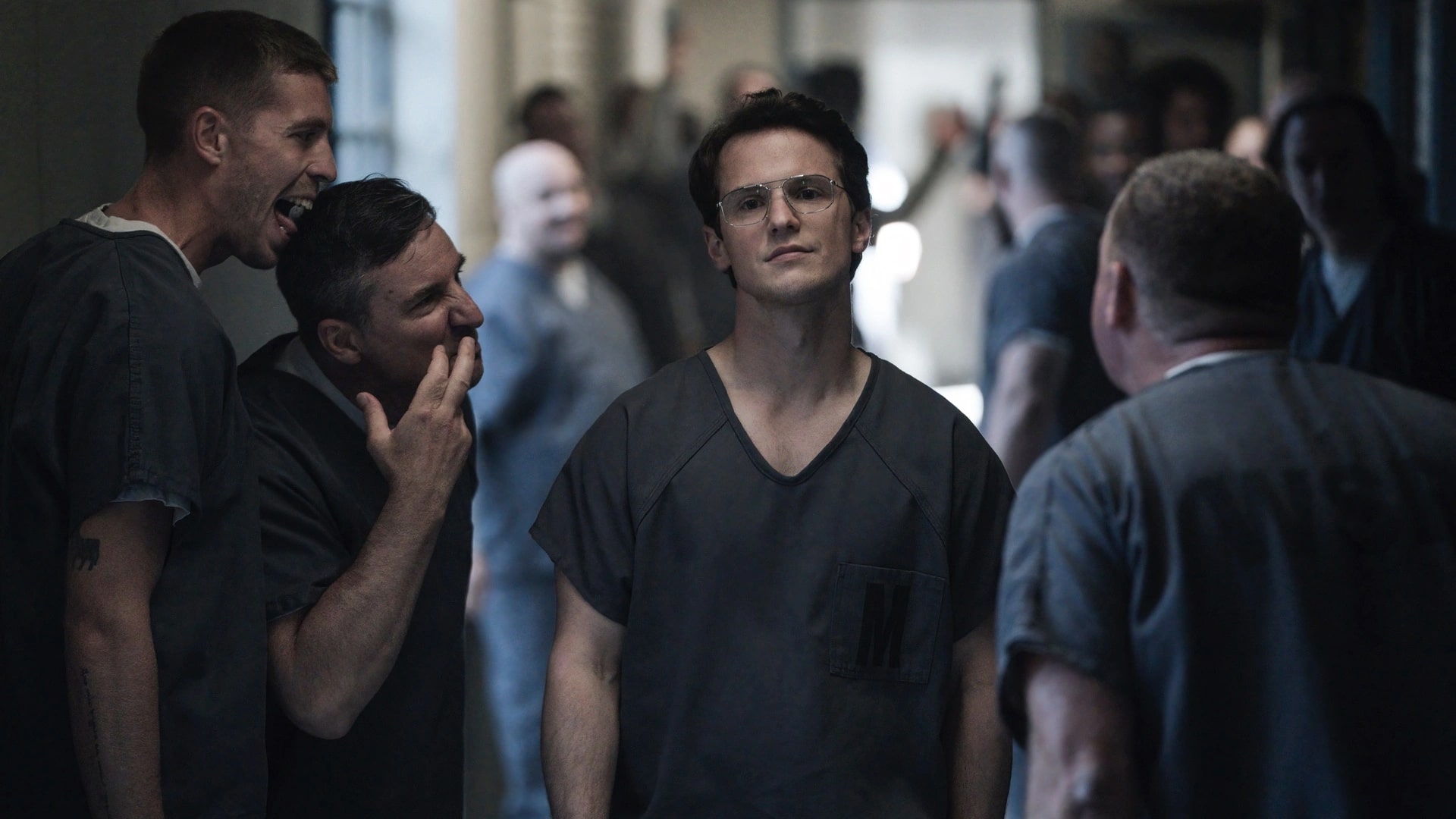 Peacemaker introduces the audience to the title character’s father. Auggie Smith (Robert Patrick) is a complete monster. He is a convicted white supremacist supervillain who operated under the identity of “the White Dragon.” Peacemaker’s friend Vigilante (Freddie Stroma) describes Auggie as “a racist whackjob,” while his colleague Leota (Danielle Brooks) remarks that Auggie is “one of the worst people to set foot on this planet.”

In some ways, Auggie is a combination of the various other terrible father figures in Gunn’s work. Like Thanos, Auggie tried to fashion his two sons into weapons; he forced Peacemaker to kill, and he blames Peacemaker for the death of his other son. Like Ego, Auggie cannot see any worth in his son beyond his own use of the boy. “I’m not going to let my own son work for them,” Auggie remarks of Peacemaker’s work with the government. He then dismisses his son, “My use for you is over.”

That said, reflecting the show’s somewhat smaller scale than Gunn’s more recent superhero films, Auggie is also a more grounded sort of monster. Gunn has talked about the challenges in writing Auggie as a white supremacist, in trying to avoid presenting the character as “this McDonalds-lite version of what a racist is” while also never glamorizing or fetishizing him. Auggie is a remarkably unpleasant character and one of the most unsettling antagonists in a recent superhero project. 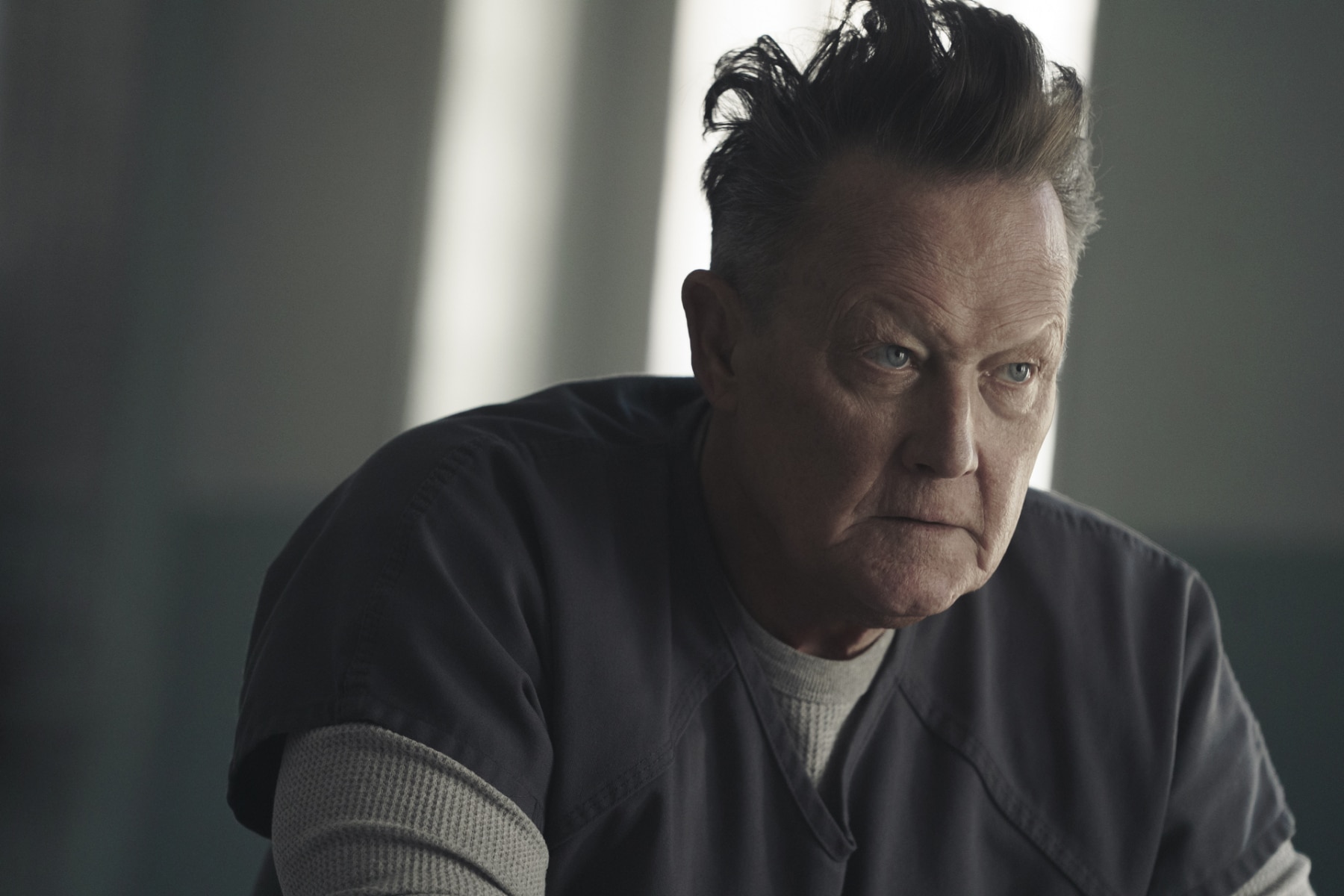 The theme of characters caught in the gravity of dysfunctional parents bubbles through Peacemaker. In “Better Goff Dead,” Emilia Harcourt (Jennifer Holland) bonded with Peacemaker on these terms, suggesting her own emotional issues might be rooted in a similarly troubled dynamic. “Dads,” she sighs. “Mine got me my first Glock when I was twelve.” Vigilante’s father abandoned his family. Even Murn (Chukwudi Iwuji) can relate to these issues, and he’s an alien. “I wasn’t created in a petri dish,” he offers.

Interestingly, Peacemaker suggests that Leota is the other side of the coin to Peacemaker. This makes sense, as Brooks is credited as the show’s second lead. “A Whole New Whirled” revealed that Leota is the daughter of Amanda Waller. Leota has apparently spent her life trying to escape her mother’s influence, but Waller is unwilling to let her daughter go. Leota’s wife Keeya (Elizabeth Ludlow) notes that Waller is “still trying to pull (Leota) in.”

Much like Auggie’s attitude to Peacemaker, Waller treats Leota as potential to be molded in her own image, arguing that her “baby girl” shouldn’t be afraid to apply her “God-given natural talent.” Despite Leota’s efforts to break with Waller, “The Choad Less Traveled” suggests her mother’s approval is still a spur. Leota’s big miscalculation is prompted by Murn’s implication that she might embarrass her mother. “Amanda Waller insisted you were ready,” he prods her. “Prove her right.”

Leota certainly proves that she is her mother’s daughter. When Peacemaker proves unable to break free of Auggie, Leota nudges Vigilante into attempting to murder his best friend’s father. When Murn understandably freaks out at this, Leota offers a half-hearted defense, “I didn’t tell him to. I just kinda put the idea in his head.” It’s a move similar to Waller’s manipulations of her team in The Suicide Squad, with the same chaotic and unpredictable results. 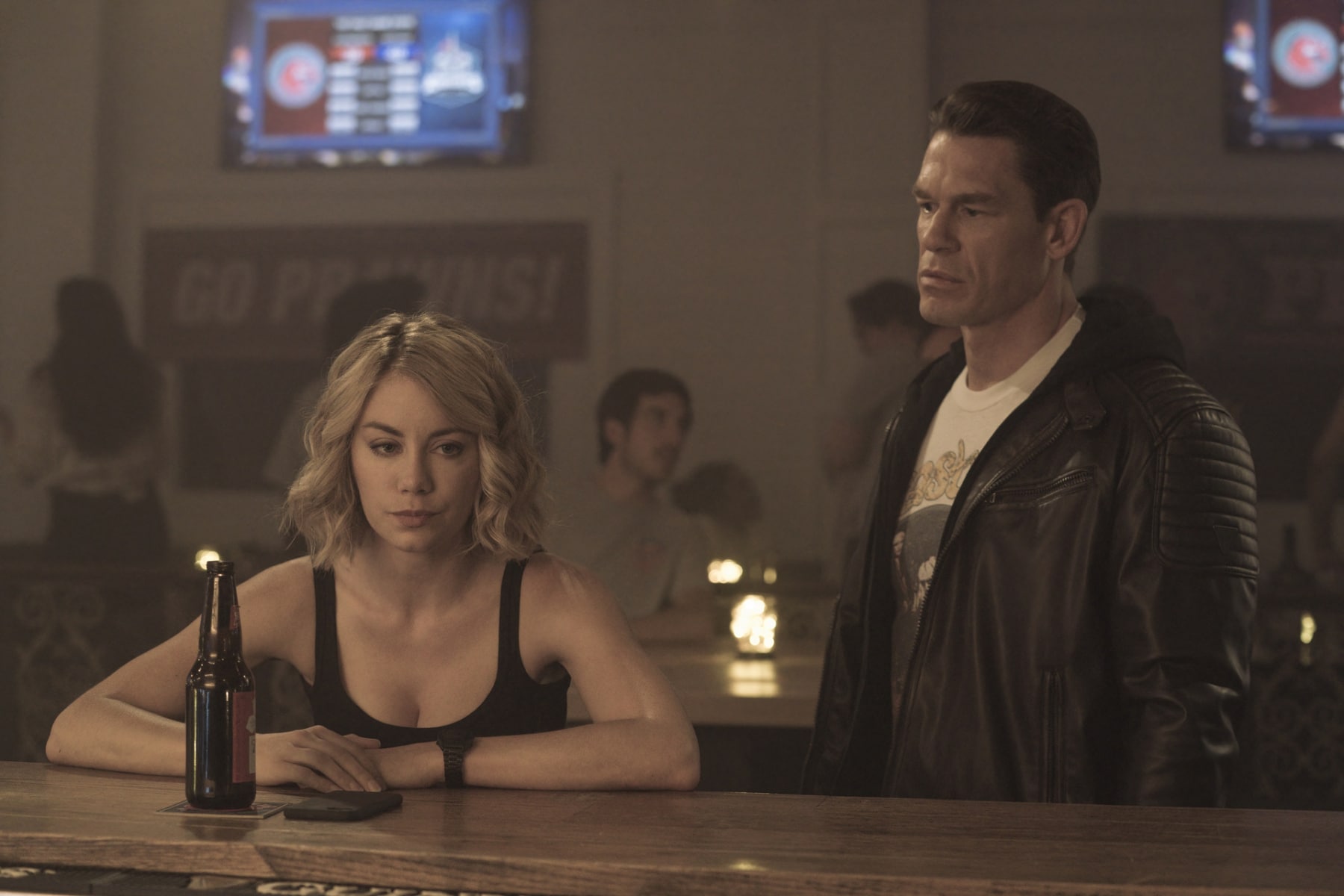 Leota insists that she was “just trying to make the hard choice,” which feels like a justification that her mother would use for, in Harcourt’s words, “treating human life like it’s nothing.” By putting Leota on this team, Waller might accomplish the same thing that Auggie did with his son, turning her only child into an emotionally stunted killer. By the end of “The Choad Less Traveled,” Leota has shot Judomaster (Nhut Le) in the heart and is avoiding concerned calls from her wife.

This recurring motif of abusive parents traumatizing and scarring their children comes back to another of Gunn’s prominent themes. For all that Gunn’s work has been criticized by some for being “too glib, meanspirited and flippant,” there is a strong emphasis on the importance of childish innocence. In particular, for all that Gunn’s superhero films might be dismissed as “cynical,” their moral compass is always clear: Those who hurt children are bad people.

Even beyond escaping abusive parents, children are to be protected in Gunn’s films. In Guardians of the Galaxy Vol. 2, it is revealed that Yondu was exiled from the Ravagers because he broke their rule, “Ravagers don’t deal in kids.” In The Suicide Squad, Harley Quinn (Margot Robbie) turns on Silvio Luna (Juan Diego Botto) when he boasts about feeding his enemies’ children to “the beast.” Even a supervillain like Harley is repulsed, acknowledging, “Killing kids? Kind of a red flag.”

In Gunn’s climactic action scenes, the director will often focus on the children caught in the path of calamity to illustrate the stakes. Rick Flag (Joel Kinnaman) vows to expose the secret experiments conducted by the government in Corto Maltese when he discovers “they experimented on children.” Flo Crawley (Tinashe Kajese) turns on Waller when Waller orders the team to let Starro feast on the island’s population. “All those people,” Flo explains after incapacitating Waller. “Little kids.” 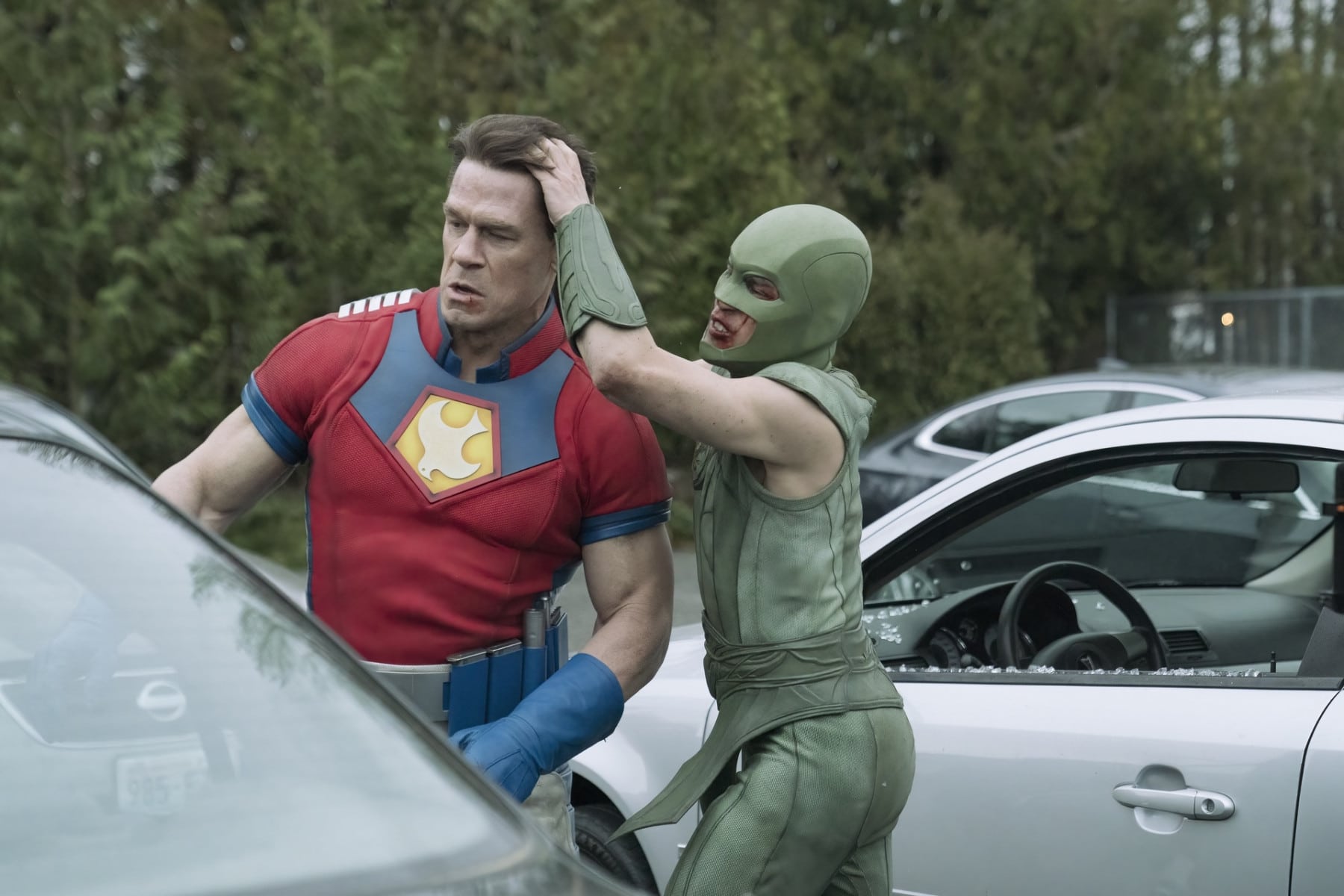 This theme is important to Gunn. Gunn witnessed what he would later realize was abusive behavior by his school’s monsignor as a child in Missouri, creating an “incredible society of fucked-up-ed-ness” among his contemporaries. He has described his Guardians movies as films about “adults who were abused as children starting to heal,” and that reading applies just as readily to The Suicide Squad and Peacemaker. Peacemaker and Vigilante often feel like kids who never got to grow up.

Peacemaker suggests that these cycles of violence are passed down from one generation to the next and that they reply to themselves. At the climax of “The Choad Less Traveled,” Peacemaker tries to numb himself with alcohol and music. He remembers stabbing his first victim with a box cutter at his father’s instruction, the edit juxtaposing that first kill with his murder of Rick Flag by impaling his heart with a shard of glass at the climax of The Suicide Squad. These events are tethered, trauma reverberating.

There is also perhaps a faint visual echo to be found in the quick shot of Peacemaker’s brother dying, spit and blood coming from his mouth, recalling the emergence of the butterfly from the bloody skull of Senator Goff (Antonio Cupo) at the end of “Better Goff Dead.” The question is whether Peacemaker can ever become a better man than the one his father made. Peacemaker knows that Leota is right when she tells him “there is nothing to love” in Auggie, but he still can’t break free.

Then again, Peacemaker might be ready to break that cycle. In The Suicide Squad, the character swore that he cherished peace, “no matter how many men, women, and children he had to kill to get it.” It’s a line that characters quote back to him in Peacemaker. However, early in “The Choad Less Traveled,” Peacemaker seems just a little more mature and developed. “I’m not fucking killing kids just because you say so,” he tells Murn. It’s hardly redemption, but it is perhaps baby steps towards it.