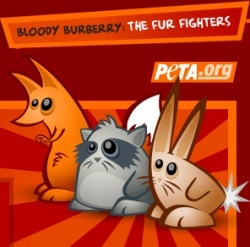 People for the Ethical Treatment of Animals have put out a game designed to bring attention to the ongoing use of real animal fur by British fashion house Burberry.

In Bloody Burberry: The Fur Fighters, players take on the role of a devastatingly cute fox, raccoon or rabbit in the ongoing struggle against fur. The three-level game begins by turning players loose in a Burberry store, where they must spraypaint “no fur” messages on various coats and stoles while dodging in-store security, then moves to a runway fashion show in which players must flash anti-Burberry signs in front of models who are “too dumb to know better,” before culminating in a Burberry abattoir showdown with Cruella de Vil-like Burberry CEO Angela Ahrendts.

Although the game opens with a screen saying, “It’s time to take matters into your own hands!” there is also a disclaimer prior to the start of gameplay which reads, “Before you play this game, please remember – unless you’re a raccoon, fox or rabbit (and thus not subject to human laws) – it’s still illegal to paint things that don’t belong to you, damage or destroy other people’s stuff, and go onto private property, without getting permission first. So please keep your anti-fur antics outside this game frequent and fervent but legal.”

Along with the game, PETA’s Bloody Burberry site also features links to information about Burberry’s use of fur and fur farms as well as a link to a petition calling for a boycott of Burberry until it stops using fur. To check out the game, which can be played online or downloaded for the PC or Mac, hop on over to bloodyburberry.com.