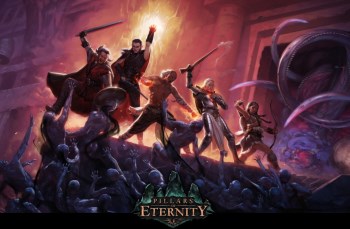 The RPG powerhouse of Obsidian is partnering with Paradox Interactive to help market and publish its Kickstarted Pillars of Eternity.

You might not put the two companies together in your head – one creates RPGs like Knights of the Old Republic 2, Fallout: New Vegas and the recent South Park: Stick of Truth, while the other is known for grand strategy games like Europa Universalis and Crusader Kings. Paradox Interactive is based in Stockholm, Sweden, while Obsidian Entertainment is in Irvine, California. The two companies don’t exactly match up on paper, but Paradox CEO Fredrik Wester and Obsidian Studio Head Feargus Urquhart said in a special press conference at GDC 2014 that there’s more in common than you might think. Perhaps that’s why they’ve announced the two have entered a partnership for the game Pillars of Eternity. Obsidian will use all of the $4 million raised on Kickstarter to develop the game while Paradox will invest its own capital to market and distribute Pillars of Eternity.

“We are partnering up with some awesome world-class developers,” Fredrik Wester said. “We are hoping this is a long-term relationship as we have a lot in common with the Obsidian guys.”

“We are fans of Paradox games,” Urquhart said. “We couldn’t have done what we are doing without our backers. Publishers look at $500,000 games and $20 million games, and Pillars of Eternity fell in the middle.”

The two CEOs were careful to point out that this is a business partnership only. Paradox will not have any hand in the development or design of the game, and Obsidian is not handing over any of the funds raised on Kickstarter to Paradox. Instead, this partnership frees Obsidian up from having to worry about marketing, meeting with press, heading to trade shows, or setting up distribution models. Urquhart and his team can focus on making Pillars of Eternity, and screw all the business stuff. Kickstarter fulfillment will also be handled by Paradox.

Paradox will obviously earn some percentage of sales once the role-playing game lands on marketplaces like Steam – Wester is a nice guy but he’s by no means an altruist. The whole arrangement is unique in that a publisher has never assisted a large Kickstarter project like this, and we’re interested to see whether this kind of deal is something we’ll see games like Star Citizen or Wasteland 2.