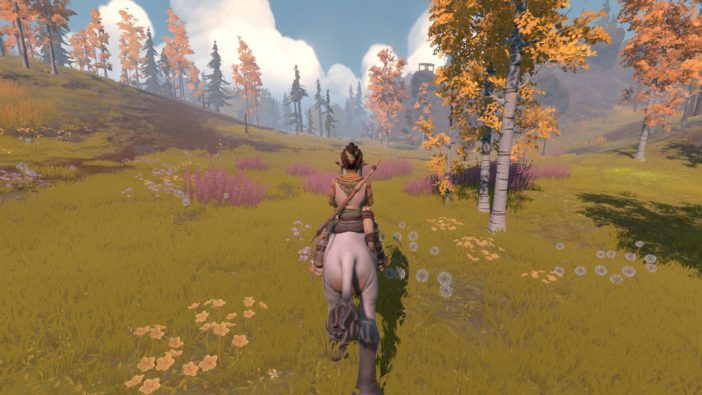 In Pine, humans never made it to the top of the food chain. The game takes place on the island of Albamare, where foxes, moose, crocodiles, and other animals managed to develop speech and tools, becoming the dominant cultures and forcing humanity to the margins of civilization. Pine is the story of Hue, an adventurous young human who ventures out into Albamare to seek a new home for his dwindling tribe.

Pine‘s open world is heavily systems-driven, with conflicts between various factions flaring up and dying down as each faction’s basic needs are met or withheld. Players will be able to side with or against any factions they see fit, forming strategic alliances or just partnering up with a favorite species.

Twirlbound creative director Matthijs van de Laar told the Escapist that the main plot of the game will take about 20-to-25 hours to complete and that there will be numerous optional side activities that can extend the game’s length. There are multiple collectibles, special outfits, tools, and other gear to craft, as well as a glossary to fill that will incentivize thorough exploration. Because so much of the game is driven with systems, no two playthroughs will be exactly alike.

The game was funded on Kickstarter back in 2017 and originally intended for a 2018 release date, but the project’s huge scope and Twirlbound’s tiny seven-person team necessitated pushing the game back a year. It recently made a splash at Gamescom, where it was playable on the show floor.

For more on Pine‘s various interlocking dynamic systems, the bespoke tech used to build the game, and how its story was inspired by Charles Darwin’s On the Origin of Species, you can read our exclusive interview with van de Laar.