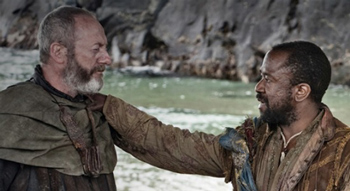 Game of Thrones has become the most pirated TV show of the spring season.

According to numbers from TorrentFreak, the TV adaptation of George R.R. Martin’s tale of swords, sorcery and unmitigated bastardry, is really popular amongst viewers of the swashbuckling persuasion. Each episode of the show has been downloaded approximately 3,900,000 times during the season that ended on June 1st 2012, beating out How I Met Your Mother and The Big Bang Theory, which had 2,830,000 and 2,750,000 per episode respectively. Keep in mind, these numbers only account for episodes downloaded via BitTorrent.

What’s interesting is that pirates make up a far larger percentage of Game of Thrones’ viewers than they do for its competitors, at least in the states. Many argue this is due to the fact that Game of Thrones is owned by HBO, a company oddly reluctant to take people’s money. The show is notoriously difficult to view for those without cable. Even HBO’s online streaming service, HBO Go, requires a subscription to HBO’s cable service. Throw in the frequent airing delays – the show is particularly popular in Australia, where episodes are aired one week after their US counterparts – and it’s easy to see why many viewers, international and otherwise, are turning to piracy for their Tyrion fix.

Currently, the show is on track to replace Showtime’s Dexter as the most pirated TV-show of 2012.