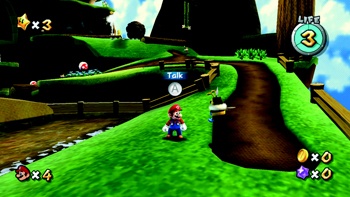 For the most part, I have tried to avoid the common conceit of talking about everything gaming in terms of being a dad. I recall too well hearing far more about other people’s children that I cared to when I had not burdened the world with my own genetic copies, but now that my five year-old has become something of a Padawan gamer himself, I find that he is having as much an impact on me as I on him.

In the simplest terms possible, as a somewhat jaded executive gamer I find that playing with my son lets me inhabit a long lost frame of reference for looking at games, and by doing so I’ve actually found my hobby to be far more entertaining even when playing on my own.

I’ve talked at length about experiences over the past year with World of WarCraft, Fallout 3, Burnout Paradise, GTA 4 and all the staples of what I had considered an otherwise mediocre 2008. What I have not shared as much is that amount of time I have spent with games like Indiana Jones Lego, Mario Party 8, Super Mario Galaxy, Wall-E and Peggle. These are the titles that I share with my son, and often in contrast to their far more high-profile and adult peers, these are the games that populate my fonder memories.

Let it be a given that spending time with my son is immediate bonus points for any game before it has even been torn from its plastic wrapping. I don’t imagine that if I’d sat down alone with Wall-E I’d have come away with quite such a rosy impression. But, even under scrutiny the value and joy of my experiences isn’t so easily dismissed with the tropes of well-spent quality time. In fact, I find that playing games with my son allows me to approach the experience in a new way and gain joy in unexpected ways.

Let’s compare and contrast. Playing Fallout 3, I was always a man with a purpose. Whether that purpose was to dispatch some violent mutants or plumb the depths of some once vital Washington landmark, I was always moving forward in the game. There was an overarching goal, and in order to reach that goal I had to meet a series of lesser goals. I was climbing a ladder, focused on the assent and rarely pausing to find out if I can see my house way up this high.

When my son and I began playing Super Mario Galaxy, I initially approached the game in a similar fashion. Each level was a puzzle of a kind, demanding that I complete it and driving me ever forward toward a star so I could unlock new levels to collect more stars. My son, on the other hand, approached the game very differently. At one point I watched him spend two minutes leading a wayward enemy around a tiny planetoid, just to see how long the angry mushroom-thingy would chase him. He laughed. I puzzled. 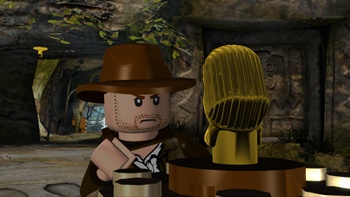 He seemed to often forget entirely that there were precious stars waiting at the end of elaborate areas to be gathered. He didn’t move ever forward, so much as he moved kind of sideways, scuttling in a zig-zag to some sort of conclusion. Together, often with my help, we would meander through the lush country sides of these games until we happened upon the goals more by accident than intention.

Where I played the game, he played in the game.

That’s an important distinction to make, and it goes to the idea of emergent gameplay that developers are always going on about. Thinking about it makes me wonder, looking back, if I didn’t completely misinterpret my time spent playing those other games, like GTA 4, like Fallout 3, like Burnout Paradise, like World of WarCraft.

Were it not so violent and vicious, how would my son have played Fallout 3 if he had been at the controls instead of me? Would he have had more fun than I did, coming away with a fulfilled experience not diminished by preconceived notions and completionist urges? I think almost certainly he would. How many different diversions would he have found, that I blew past, far too preoccupied with the next checkmark on my completed quests tab?

In a way, he had to drag me kicking and screaming to his point of view. When we played Lego Indiana Jones, I would grow impatient, ready to move forward as he battled never ending waves of Nazi Legos or jumped his Lego motorcycle off a cliff just to see what happened. I felt the weight of the goal on my head. He felt the joy of play lift his spirits.

I try to do that with more of my games now. I allow myself to be distracted, to occasionally fail or die just to see what happens, to not be so narrowly focused on maximizing my score to time ratio. And, I can’t help but feel like that philosophy has made a lot more of the games I’ve played recently a lot more fun.

All I’m saying is, if you haven’t had the opportunity to play like you’re a five year-old lately, you may be missing out.

Sean Sands is the co-founder of gamerswithjobs.com, a professional copywriter and father of two kids. That makes him the third most mature person in the house.