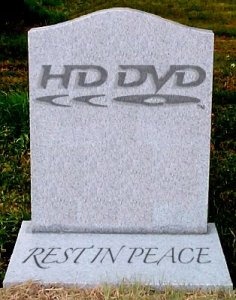 Sony PlayStation 3 sales will coast upwards of 10 percent on the back of HD-DVD’s apparent demise, analysts predicted.

Toshiba recently abandoned the format, backed by Microsoft, giving rival Sony the edge, especially as its console already has Blu-ray playback built in.

“Longer term, I think it’s a huge boon for Sony, as most retail clerks will be instructed to push Blu-ray along with sales of HD monitors at holiday, so we should see a large increase in PS3 sales year-over-year at holiday,” Wedbush Morgan analyst Michael Pachter said.

Screen Digest analysts Ed Barton and Richard Cooper concurred: “With the format war over, and the end of the consumer indecision resulting from it, video consumers are likely to purchase the PS3 as the most cost effective, future-proof Blu-ray player,” they said.

Microsoft put on a brave public face over the news recently, saying:

“As we’ve long stated, we believe it is games that sell consoles and Xbox 360 continues to have the largest next-gen games library with the most exclusives and best-selling games in the industry.”