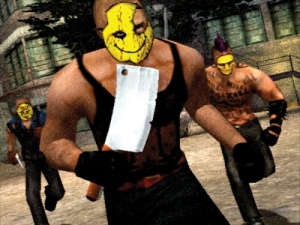 Rockstar Games and the BBFC continued their not-quite-epic struggle over the future of Manhunt 2 in the U.K. last week, battling over the fate of a game the rest of the world cares very little about. Manhunt 2 attracted pre-release attention primarily as a result of morbid curiosity, as gamers wondered just how far Rockstar would go with its follow-up to the infamous Manhunt, but as it turned out, most of us will never know. The company chose to emasculate the game to accommodate the ESRB and other agencies, leaving even those few countries that indicated they would accept the game as-is with a watered-down version of the developer’s original vision. But in the U.K., gamers can’t even get that small slice of satisfaction: The BBFC decided the edited version was still inappropriate for release and took the decision seriously enough that following a successful challenge by Rockstar to the country’s Video Appeals Committee, it continued to fight, launching and winning its own appeal against the appeal, forcing the VAC to hear arguments again. Throughout it all, the game has remained off the shelves.

Most observers expect that recent victory to be the last stop on the Manhunt 2 Train Ride to Nowhere. It is very likely the VAC will reconsider its decision and rule against Manhunt 2, and just as unlikely that Rockstar will be allowed to appeal the matter further. Both sides have been willing to go to the mat over the game, but at this point the advantage has shifted decidedly to the censors.

A lot of gamers don’t seem to care. The prevailing attitude is Manhunt 2 barely rises above half-assed anyway, so it’s not as though our tea-drinking brethren are missing out on much. One recent forum post read, “The BBFC just saved a whole lot of Brits from spending their hard earned quids on this shite game.” I suppose it’s easy to be cavalier about censorship when it’s applied to something you dislike or just don’t care about, but the game’s quality is absolutely irrelevant. I don’t care how crappy Manhunt 2 is (and it’s not like it’s the worst thing you’ll ever play), there is a tremendous gulf between whether a person should play it and whether that person should be allowed to play it.

But what’s often overlooked is that the ban isn’t about the game so much as it is about gamers themselves. Consider the fact that recent BBFC decisions have made it legal for people to purchase and watch movies including Fetish Fucks, Club 69 Revisited: Filthy Fun in the Sun, 3PW: The Right to Remain Violent, Sub-Asslickers, Real Young Lesbians Volume One and The Ultimate Fighter 5, among many others and without even mentioning the obvious mainstream targets like the Saw franchise. All the raw, uncorked sex and violence that I can handle, both imaginary and real, at the tips of my fingers – as long as it’s not contained in videogames.

Why? Violent and pornographic movies are fine because they’re intended for adults. Videogames with violent or sexual content, on the other hand – and we’re not even approaching the level of either that can be found in everyday movie releases – apparently are not; the obvious implication being that even after all these years, videogames are still “for kids.”

This perception makes games easy targets for legislation, censorship and frothy ranting, because kids are powerless against these kinds of attacks. They can’t vote, and they don’t have the wherewithal or motivation to put together any kind of cohesive protest against commercial entities. Howling about injustice on gaming forums and Facebook may be cathartic, but it doesn’t amount to much in the real world; that kind of demographic impotence, real or not, can spur individuals, organizations and even governments to reckless and agenda-driven behavior, based entirely on the belief that they can act with impunity.

The reality of videogames, as we all know, is something entirely different, and we can readily quote the statistics when called upon to do so: The average videogamer is 33 years old; the vast majority of videogames sold are rated T (Teen) or lower; FCC studies have shown the ESRB works, with a very high level of awareness and employment among both parents and kids. But here’s the bad news: It doesn’t matter.

Joseph Goebbels is famous for saying, “If you tell a lie big enough and keep repeating it, people will eventually come to believe it.” This is what the videogame industry is up against. The facts don’t mean a whole hell of a lot against the outrageous and repeated assertions of groups like the Parents Television Council, the National Institute on Media and the Family, Focus on the Family, and, yes, even Fox News. Geoff Keighley being talked over by Cooper Lawrence and Co. is simply a microcosm of the industry’s everyday interaction with much of the world at large.

Of course, it’s not an endorsement of stooping to the level of the slack-jawed mudslingers. The truth is our greatest weapon; Herr Goebbels followed his famous quote about the power of a lie by ruminating on the even greater power of truth: “The truth is the mortal enemy of the lie,” he said, “and thus by extension, the truth is the greatest enemy of the State.” It doesn’t take a genius to extrapolate that to more immediately relevant topics. The truth will indeed set you free, as long as there’s someone around to fill you in on it, and that’s where we’ve dropped the ball. We preach to the choir. We talk to each other about how normal we are, how prevalent gaming is, how correlating violence to videogames is about as useful as correlating violence to breathing, but nobody’s ever really stood up to the world at large and pushed back. 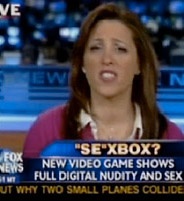 This is why EA’s recent stand against Fox was as surprising for gamers as it was for everyone else. We’re so used to taking this kind of crap with nothing more than inward-looking outrage that we were caught completely off guard by an industry heavyweight actually calling our detractors on their lies. It’s akin to the moment when that nervous-looking kid who never talks and sits alone at lunch finally snaps and beats the living hell out of the star football player one day after school: Nobody sees it coming, but everyone feels the tremors of a very fundamental shift in the social dynamic. Fox apparently thought we were an easy target; EA made a commendable effort to prove them wrong.

But the long-term impact of EA’s maneuver will depend entirely on the follow-through, not only by EA (and hopefully other industry heavy-hitters, like Activision, Ubisoft and Valve, for starters) but by “non-aligned” groups and even individual gamers. The Entertainment Software Association’s new political action committee could be a formidable weapon if properly wielded, and its leveraging of the Video Game Voters Network represents an opportunity for individuals to make themselves heard. On a more grassroots level, correspondence with local representatives, congressmen, members of Parliament or whoever it is you’ve elected to carry your voice in government is a great way to begin breaking the perception that videogames are something played by the voters’ kids.

In truth, the games themselves have never been the problem. It’s the perception of who’s playing them that keeps the industry on the defensive. Toning down the games only gives incentive to people who would implement tight legislative restrictions on anything harsher than Viva Pinata. But meeting the detractors head-on as we really are, and not as they see us, might just be the best first step toward establishing the kind of recognition and respect that every other entertainment medium in the country takes for granted.