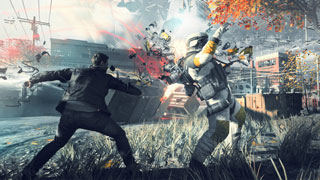 There have been some issues with the PC version of Quantum Break, and a Windows 10 update is needed to fix some of them.

If you’ve been playing Quantum Break on PC, you know there have been some issues. Framerates have been low – even on great hardware – and in many cases can’t even get to the refresh rate of the monitor. A video memory issue in longer sessions can affect performance as well. But perhaps the most egregious problem is the propensity of the game to outright crash.

Earlier this week, Microsoft found a memory management issue in Windows 10 that is apparently causing the game to crash on certain video cards. Worse, this happens more frequently when you have your game settings cranked up. But that’s not the worst news.

The worst news is that Remedy can’t fix this issue. They need Microsoft to roll out a Windows Update to patch the issue. Plans are apparently in place to do this, but there’s no word on when it might happen.

There are more issues with the game. You can see a full list of all the outstanding issues with all versions of Quantum Break over in the game’s official forums.

It’s a shame to see the issues Quantum Break is having, especially since Remedy has been a pretty solid PC developer in the past. Hopefully they’ll get it resolved soon.