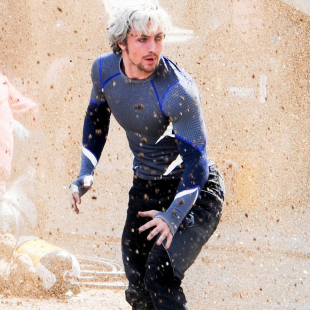 New Age of Ultron pics also provide a close up of the film’s villain.

Hot on the heels of a recent batch of leaked photos from the set of Avengers: Age of Ultron, a new collection of pictures from the film’s shooting has surfaced showing off even more of the titular villain as well as additional shots of Quicksilver, Scarlett Witch and Hawkeye in action.

The pics in question give a much closer look of Ultron than in the previous photographs, catching the film’s villain up close and with his face clear and visible. Granted, this is technically just a stand-in (hence the normal pants and shoes) to give the other actors a tangible reference point to respond to. Even so, the mock-up being used looks pretty danged close to the comic book source material.

The rest of the photos primarily feature Quicksilver and Scarlet Witch who look very close to concept art released by the film’s production team. Just personally, I like what they’ve done with Scarlett Witch. Granted, her look is much more subtle than she’s generally presented in the comics, but I honestly can’t think of a way they were going to pull off that costume without it looking exploitative and silly.

Speaking of silly, I can’t be the only one who thinks Aaron Taylor-Johnson’s Quicksilver looks a tad dopey. The outfit, the white hair coupled with the dark stubble, it just doesn’t do it for me. Then again, maybe that’s just my opinion. What do you guys think of these new pictures? Have they made a misstep with Scarlet Witch and Quicksilver or is the film taking them in the right direction.