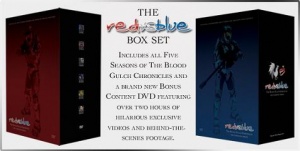 Rooster Teeth Productions has passed the five-year mark and is publishing a new DVD box set to commemorate the occasion.

Halo machinima Red vs Blue is marking its fifth birthday with the release of a DVD box set collection. The six-disc collection includes all five seasons (100 episodes) as well as a sixth disc with over two hours of additional behind-the-scenes footage. Fans who’ve already acquired the seasons may buy the special dual-colored box and bonus disc separately.

Team Co-founder Burnie Burns offered special thanks to those who helped build Rooster Teeth’s success during the past half-decade:

I think it goes without saying that we would not have made it five days, much less five years without the support we get from Microsoft and from everyone at Bungie Studios. But, we’re going to say it anyway. The trust and encouragement they have shown us in the last five years has been humbling to say the least. And the love that the people of the internet have demonstrated keeps us going week after week. On behalf of the Red vs Blue crew and the whole Rooster Teeth family, I want to thank of all of you for giving us a fantastic and fun five years.

We hope to return the favor in the next five.