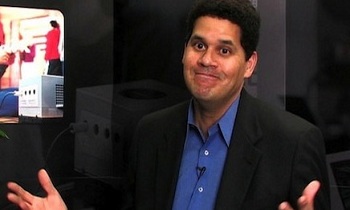 Nintendo of America president Reggie Fils-Aime feels “very good about the value proposition” represented by the Wii U.

Nintendo dropped some big news yesterday, announcing not only a price drop for the Wii U, but also the 2DS, a cheaper, 3D-free version of the 3DS. Now, commenting on the upcoming launch of the PlayStation 4 and Xbox One, Nintendo of America president Reggie Fils-Aime has expressed why he thinks gamers should go with Nintendo.

A proposition certainly made more attractive by the recent price drop. Much like the Wii benefited from being vastly cheaper than the Xbox 360 and PS3, it stands to reason that a $299.99 Wii U could look better to some consumers than than the PS4 and Xbox One which cost $399.99 and $499.99, respectively. Fils-Aime could arguably also have a bit of a case when it comes to the PS4 and Xbox One’s launch line-ups. While both consoles will boast a few new exclusives, several of their bigger launch titles are multiplatform games that will be available on other systems, including the Wii U. We wouldn’t quite say this amounts to “meh,” especially considering some of the new features being added by the PS4 and Xbox One, but we could see why others might.