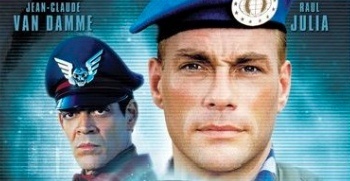 Discover why, along with Forrest Gump, Pulp Fiction, Shawshank Redemption and The Lion King, 1994 is the greatest year in cinema history.

There is no greater joy in this world than opening up ones email inbox and finding a freshly delivered item from one of the internets many fine retailers, informing you that some frivolous piece of crap that you simply could not live without is currently racing to your door. Earlier this morning, I received the following email-

We thought you’d like to know that we shipped your items, and that this
completes your order.

Yes, the film that the New York Times once referred to as, “A dreary, overstuffed hodgepodge of poorly edited martial arts sequences and often unintelligible dialogue,” has finally come to Blu-Ray, and not a moment too soon. With the release of Street Fighter IV right around the corner, now is the perfect time to paint an American flag on your biceps, practice your split-kicks and relive the greatest cinematic moments of 1994.

1UP has put together a fantastic collection of Street Fighter: The Movie’s very best moments, including such highlights as Guile’s riverbed speech and Captain Sawada making an absolute mockery of the English language. Now all we need is a rerelease of the official soundtrack to the movie, as MC Hammer laid down some straight illin’ tracks.