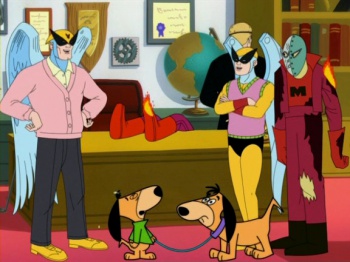 One of the big TV-side reveals at the just-concluded San Diego Comic-Con turned out to be an extended tease of Adult Swim’s new parody series, Mike Tyson Mysteries, a send-up of 70s and 80s celebrity cartoon series with the onetime Iron Mike providing his own voice. Goofy stuff, to be sure, and well in line with Adult Swim’s current reigning original-programming aesthetic of protracted absurdist meta-jokes that feel deliberately designed to provoke pages of furious message-board rants about all the supposedly-glorious anime offerings they “should be” showing instead.

But it’s also something of a return to the programming blocks turn-of-the-millennium original formula, namely in the repurposing of nostalgiac animation characters and styles for ironic effect. In many ways, everything AS puts out that isn’t a re-run of a Fox Network series — even their offbeat live-action offerings (soon to include Aaron McGruder’s incendiary Black Jesus) — has descended in an unbroken lineage from Cartoon Network’s original late-night curiousity Space Ghost Coast-to-Coast. But none fit this formula more so than my favorite of the early AS offerings: Harvey Birdman: Attorney at Law.

Birdman was a not terribly well-remembered (or well-regarded) Hanna-Barberra cartoon superhero of the mid-60s, originally packaged alongside a somewhat transparent Fantastic Four knock-off called The Galaxy Trio. He has a pet bird, a sometimes sidekick named Birdboy, takes orders from an eyepatch-wearing boss named Falcon 7 and loses his powers due to lack of access to the sun (he’s solar-powered) about once an episode to generate tension.

Attorney, like a lot of AS series to date, looks and sounds like a one-joke premise: Harvey Birdman (apparently his full name) takes up a law practice. Ha. The big gimmick (at least at first)? He represents cartoon characters accused of various crimes, sometimes satirical (Shaggy and Scooby-Doo get busted for possession, Droopy Dog sues a plastic surgeon for malpractice) other times just bizarre (Yogi Bear’s young sidekick may or may not be the domestic terrorist “The Una-Booboo”). For most of the first season, the show was chaotically structured like a hellzappopin’ sketch series, but swerved into a semblance of continuity and character-building for a two-part season finale that would define the remainder of the series (though individual episodes were still structured around cases for the most part).

Falcon 7 was back on-hand, reworked as certifiably insane law firm boss Phil Ken Sebben (Stephen Colbert), along with the suspiciously calm “Peanut” (aka Birdboy) as a paralegal, and Hanna-Barberra obscurity Peter Potamus as… well, it was kind of unclear what exactly his job was, other than to discreetly ask various co-workers if they’d “got that… thing I sent ya?” Paget Brewster turned up as Phil’s daughter in Season 3, also known as Birdgirl — whom Sebben finds awkwardly attractive. 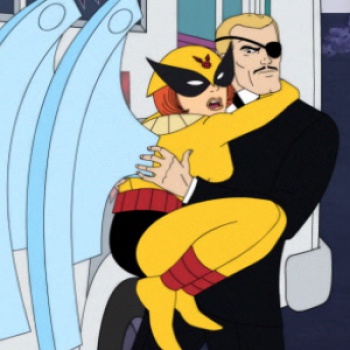 Right off the bat, it was clear that AS was planning to milk the “small audience/inside-jokes-preferred” nature of their broadcasting to full effect. The aforementioned Booboo episode devotes its ending to a looooong (especially for a 15 minute show) riff that relies entirely on the audience remembering the ending to a somewhat forgotten Glenn Close/Jeff Bridges legal thriller. Doctor Quest and Race Bannon get two episodes, both dedicated to the possibility that they can be easily “read” as a gay couple (the same joke was used re: Doctor Venture and Brock Samson in the Venture Bros pilot, but scrapped for the series).

Absurdism was the top priority, but here and there bits of poignancy snuck through with the bigger idea of these various cartoon also-rans drifting aimlessly through nostalgia-saturated pop-culture as a go-to “meta” theme: “X the Eliminator,” a villain from the original cartoon, turned up to continue his now 30+ years-long unsuccessful quest to deliver the crest from Birdman’s helmet to the evil organization F.E.A.R… only to find that everyone had stopped caring about that but him. Superfriends’ Native American size-changing superhero Apache Chief sues a coffee shop for an… “accident” that temporarily depowers him for what feels like an extended erectile-dysfunction joke but slips seamlessly into a darker riff on the tokenizing of “ethnic” super-characters (Black Vulcan, annoyed at his name, wonders why they don’t just call Aquaman “Whitefish”).

The characters also developed… in a manner of speaking. Harvey’s desperate need to please and transparent insecurity got more pronounced to the point of delusion throughout the second and third season, but then turned around to rally the other employees (well, okay, just Potamus) in the absence of a recently-deceased Sebben in the abbreviated fourth and final season. Potamus becomes more ridiculous (attaining Hulk-like transformation powers) while also emerging as a blustery foil for the rest of the supporting cast. Even Peanut’s inexplicable constant calm (the main joke of his character) segued into send-ups of teen angst a few times.

By the time it reached its two-part finale, it was wholly appropriate for the series to wrap-up with Harvey (and Peanut and Birdgirl, for good measure) having to drop the lawyer-parody pretext and take on a slew of villains in a superheroic manner more befitting the original show: In its own weird way, the show had (almost) rehabilitated a character that had been known for decades as a punchline for every other joke about bad cartoon superheroes.

Harvey Birdman always seemed to be the odd-man-out of Adult Swim’s inaugural pre-Family Guy era lineup (the “network” existed for three years before it picked up the then-canceled Fox series, the airing of which supercharged both it and AS’s ratings); not as much of a phenomenon as the still-running Aqua Teen Hunger Force, not as memetic as Sealab 2021 and lacking The Brak Show’s explicit callbacks to Space Ghost. But in a lot of ways it’s my favorite of the lot — maybe my favorite “classic” AS series apart from Venture Bros. The entire series is on DVD, and there was a pretty amusing video game for Wii and PS2 in the Phoenix Wright mold. Definitely worth a look, if you managed to miss it back in the day (or weren’t born yet).