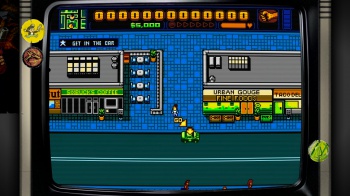 Indie hit Retro City Rampage is being ported to the Nintendo 3DS handheld, but unlike most games on the platform, it won’t take advantage of the system’s 3D functionality.

Retro City Rampage is a satire of gaming and pop culture in general. Superficially it offers a Grand Theft Auto-style open world, but the game’s aesthetic is purposely modeled after the 8-bit graphics of the Nintendo Entertainment System. The game’s content continues this theme of blending the old with the new by including references to everything from the Teenage Mutant Ninja Turtles to Christopher Nolan’s The Dark Knight, and the entire package oozes a flippant, over-the-top sense of humor that has made it a favorite among the hardcore gamer set. As a result, it was an instant hit and it should come as little surprise that the game has been slowly making its way to nearly every gaming platform in existence.

Next up is Nintendo’s 3DS handheld, and while the game should be as endearing as its earlier incarnations, this latest iteration of Retro City Rampage will not take advantage of the 3DS’ most prominent feature.

“The main game is 2D, just like the other platforms,” reads a new entry on the official Retro City Rampage website. “While just as much as you, I would love to play RCR in 3D, with a top down angle, a conversion wouldn’t be trivial. With sidescrollers, developers can simply separate the background and foreground layers and distance them apart. However, with a top down perspective using cube-like objects such as buildings and vehicles, it would require the graphics to all be recreated as 3D objects, a new rendering engine, a camera system that players would be happy with, and further optimizations.”

“For a new game it would be more feasible, but for an existing one, it simply would’ve taken too long.”

The good news however, is that developer Vlambeer is doing its best to keep the main thrust of the title intact. “While all previous versions were nearly pixel-for-pixel identical, the dual screens, lower resolution and less beefy processor meant some things had to go back to the drawing board,” the post states. “Quality’s important to me and for it to play well, it wasn’t going to be a quick-n-dirty port. It packs all of the same content as the other versions, including the new Retro+ Enhanced Graphics mode, but every mission is being tweaked and adjusted to run best with the zoomed in camera.”

While the lack of 3D functionality is somewhat disappointing, it’s certainly not going to ruin the game’s chances of success. Many 3DS owners completely ignore the handheld’s 3D functionality, as it can cause headaches and often makes games look far less attractive than they would appear otherwise. As long as all the humor and gameplay functionality of Retro City Rampage remains in its 3DS port, the game should be very appealing to devotees of Nintendo’s latest handheld.