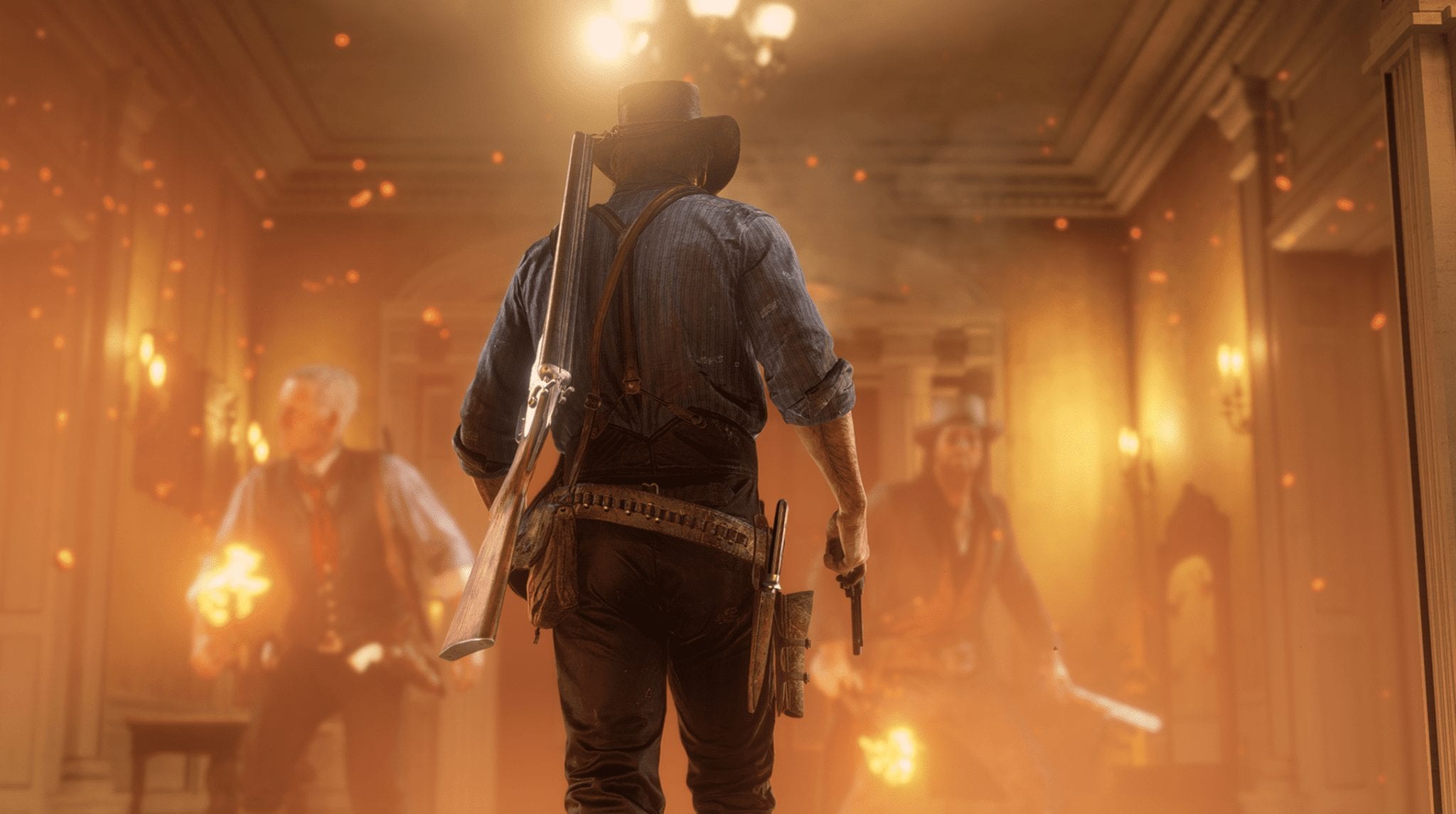 Spoiler warning: There are spoilers.

Arthur has, until now, been the pillar of strength and reliability in Dutch’s gang. He has followed orders, restored order, and even ordered supplies to keep the gang together through tragic events and dubious enterprises. He is now both at the end of his rope and his life as he battles illness and the growing sense that all his struggle might have been for nothing.

It is in this moment that I realized Red Dead Redemption 2 isn’t a game, it’s a metaphor. It’s an exposition of the burden of being the perpetual outsider. Of being both relied upon and betrayed. Of building something great only to watch others with agendas and egos whittle it away. Of feeling helpless to steer one’s own course in spite of monumental success, and unparalleled freedom. Red Dead Redemption 2 isn’t about John Marston or Arthur Morgan. It isn’t about Dutch, or Micah, or even the entirety of Dutch’s gang. What it is about is its creator’s own struggle, and the part all of us have played.

Red Dead Redemption 2 is quite possibly the last of its kind, if there ever was a game like it before: a AAA blockbuster video game employing hundreds of developers across multiple studios and taking years and millions of dollars to build. Nevertheless, every detail shows it is a product of the singular vision of its creator, and as a result it is one of the most narratively cohesive and creatively successful video games ever made.

Red Dead Redemption 2 is actually two experiences, and Rockstar Studios and Take-Two Interactive have managed to create both in such a way that neither detracts from the other. Players who enjoy a sprawling narrative adventure can have just that. RDR2’s narrative is full of memorable characters and twists and turns to content even the most die-hard single player. On the other hand, players only there for the chaos and bloodshed inherent in a Rockstar game will also not be disappointed. From very early on in RDR2, it is possible to forgo most of the narrative and commence with the killing, the robbing, the racking up wanted levels, and all the traditional, loopy fun of a Rockstar game. That those two experiences exist not side-by-side, but intertwined, is one of the game’s greatest commercial strengths, and possibly its only notable flaw.

RDR2 is easily a 100-hour game no matter how quickly you attempt to play through it. Its lavishly animated and excellently acted cutscenes may be skippable, but the crafty creator at Rockstar has embedded dozens of hours of dialogue and exposition into miserably unskippable riding and walking scenes. On the one hand, this is fantastic as it will allow you ample time to enjoy the game’s generous world full of transcendent scenery. Lush wilderness scenes transition flawlessly from one flavor of American West to another. Mountains, plains, swampland and hills are all lovingly and realistically portrayed, right down to the scurrying wildlife and scattering rocks. On the other hand, RDR2’s seemingly endless parade of exposition extends exposure to what is, even at its best moments, an entirely too long story that never strays from the ruts in the road well worn by a hundred years of Western cinema. And in a certain sense, none of the story even matters.

You may, for example, ride into a town, kill literally every single one of its inhabitants, ride away from the posse of law-keepers who appear seemingly out of nowhere, make a desperate last attempt to survive in a stand of trees outside of town, murder every single badge and gun on your trail, loot their corpses, rinse the blood off yourself in a nearby stream, and then belly up to the post office in the next town over to pay down your bounty so you can ride back into town to start the murder all over again. You may steal horses and wagons. You may murder indiscriminately. You may burn houses. You may unleash a reign of terror across the RDR2 countryside the likes of which man has never seen. And when you tire of gleeful mayhem, you may proceed to the next story marker and resume the narrative as if nothing has occurred.

Red Dead Redemption 2 is about Rockstar. It is about Houser’s gang. It is about making the most successful video games in the world, and then having to make them again and again.

“You keep killing people,” Arthur says, looking on horror as Dutch strangles a woman for pulling a knife on him. By this point in the game, I — as Arthur — have shot, stabbed, exploded, run over, or assassinated literally hundreds of people. Many in cold blood. I have invaded people’s homes to rob and/or murder them. I have burned people alive. And yet here, in this moment, the game demands I feel horrified that my friend has murdered a single person in self defense.

I have slain man and beast. Often I will slay a man and/or beast and need to transport their body somewhere else to get paid for the slaying. So I hoist the remains over my shoulder, and then sling them over the butt of my horse. Afterwards both my shoulder and horse’s butt will display realistic splashes of blood. Occasionally, as I carry remains (or wounded fellows) I will wade through water. Blood swishes behind me in believable fashion. Sometimes I will have blood on my hands and clothes after killing and skinning a beast,. Passersby will notice. They will say I look bloody or stink of carrion. This lavish and painstaking world notices when you’ve killed a single man or beast. Slay a hundred, though, and it shrugs.

This is a good place to talk about the game’s “honor system.” Doing good or bad things will move your honor meter in the relative direction. At least in theory. Perhaps one of the most surprising aspects of RDR2 is exactly how many good and/or bad deeds you have to do to move the needle. Shooting a random stranger in the face barely makes a dent. Neither does robbing them. Shooting a horse: a little more. Refuse to help a speaking character with a quest, however, and it creates a seismic shockwave.

That’s it. After playing more than half of the game side-by-side with good and bad honor, I can tell you that very late in the game there are certain speeches from certain characters that might contain slightly different wording, but by-and-large the honor system that is tagged to and tracks every action you take in RDR2 has zero practical effect. Whether you are a good person or a bad person, you will go on the same missions, kill the same hundreds of police officers and other assorted humans, commit the same crimes, and watch helplessly again and again as your gang makes horrible decisions you are unable to impact in any way, shape, or form.

Whether this is a good or a bad thing depends on how strictly you demand your entertainment adhere to realism. Or how willing and/or able you are to separate the gameplay from the narrative. The fact is, both of the experiences on offer in Red Dead Redemption 2 are excellent. The ludicrous shoot-em-up action game is the best such experience Rockstar has ever made. And the story is, perhaps, one of the most ambitious ever committed to pixels. If you’re the type of person for whom the presence of one doesn’t detract from the other, this game might be the best ever made. Either way, the near seamlessness between the two experiences is a marvel.

As far as the narrative itself, it’s brilliant and terrible. It’s epic and overlong. It’s moving and predictable. Inspiring and exhausting. It is an achievement in video game writing, acting, directing, and motion capture. It will win awards. It will be remembered long after the game itself is rendered unplayable by the advance of technology. It is also gratuitously self-indulgent, derivative, and too goddamn long.

The story of Arthur Morgan and the members of Dutch’s gang is easily the best story Rockstar head writer, Dan Houser has ever told. It is also the same story Houser has been telling for years, tweaked a bit, refined, and sharpened to a precise (if unwieldy) point. Dutch’s gang begins RDR2 on the run. If it seems like things get better from there, it is only a mirage. And no matter how bad things get for this gang, let me assure you they can (and will) get far worse. In Red Dead Redemption 2, you will play as multiple characters. You will fight multiple enemies. You will win and lose vast fortunes, make and break numerous alliances, and watch characters you have grown to love suffer and even die. This merry band of outlaws will flub attempt after attempt to strike one last big score, and eventually lose everything they’ve struggled to acquire.

The duality of the game’s experience also creates a tangible emotional struggle. Playing as Arthur, my combat capabilities steadily improved as I acquired more loot and improved my equipment. But Arthur’s effectiveness as a character within the game’s story diminishes as he becomes older and suffers from various setbacks and ailments. Eventually I, as the player, begin to feel the creeping paranoia that is the recurring unseen character of the auteur’s milieu.

And yet the game isn’t about any of that. Not really.

Red Dead Redemption 2 is about Rockstar. It is about Houser’s gang. It is about making the most successful video games in the world, and then having to make them again and again. It is about being goaded by the government, betrayed by beloveds, and cajoling compatriots to sacrifice everything for “one last score.” It is about having a dream and chasing it for “all those years,” no matter the cost. It is about looking a gift horse in the mouth and then whipping it for 100 hours a week until it gets you all the way to Tahiti, what happens when it dies on you, and who will come looking to avenge you — and defeat you — after it all inevitably ends.

The notoriously press-shy Houser has bared his soul about the trials and tribulations of running one of the world’s most successful video game studios, albeit through analogue and metaphor. That, if nothing else, makes RDR2 a true work of art that deserves every accolade. Given the game’s breadth, and it’s curious analogues, it would not surprise me if Houser never made another game again. But if he does, I sincerely hope someone talks him into making it a shorter one.