Last week I suggested reviving some old Lucasarts titles. Some people wanted to see the older games like Grim Fandango, The Dig, Day of the Tentacle, Full Throttle and other adventure games. Others wanted newer stuff like Battlefront. Either way, it’s clear there are a lot of old games we’d love to see again.

But hang on. What exactly are we talking about when we say “revive” old games? It’s easy enough to say “I liked this old game and think it deserves another chance.” It’s another thing when you have to figure out what that means, and then pay for it. If someone handed you the Grim Fandango IP, what would you do with it?

I assume by “do something with it” we’re talking about re-releasing the game in some way. Which means introducing the game to a newer, larger audience. The existing fans already have the game. Sure, some of the floppy disks are gone, but if your target market is just people who lost their copy, already beat the game and know all the puzzles, but still want to play through it again for the sake of nostalgia, then you’re aiming at a really, really small audience.

How do we go about bringing in a new generation of players? You can’t seriously charge money for the game as it exists now. Some of those games don’t run. Or they run, but it’s hard to get the sound or the controls working right. Or the game has strange speed issues where it runs too fast or too slow because the original programmer never envisioned processors as fast as they are now, and so the game can’t keep time properly. Or the control system is so archaic that new players will be put off. Or the game asks strange “Sound Blaster” questions and things about ports and IRQ thingies that made sense to DOS gamers in 1993 but are now completely mystifying gibberish to someone who grew up gaming on the N64.

You can’t very well just distribute it in its current state and tell the customer, “Go download DOS Box and then read this FAQ to get the game running.” If someone is paying for a game, they’re going to go into it expecting that it will have a simple installer and that the game ought to work out of the box without any technical fussing.

Since you own the property, it’s not unreasonable to assume you have the source code. (But not guaranteed! People were not meticulous about backups in those early days, and there are many early games where the source code was simply forgotten and lost.) Let’s also assume the game was written in C and not in some esoteric, archaic, and now-defunct language (also not a guarantee). So what do you do with it? Are you going to hire a programmer to go in and fix the game up so it works right on modern systems? (Protip: Do not hire anyone under 30 for this job. Old C code will look very strange to youngsters who cut their teeth on C++ code. Everything will look wrong to them. Ideally the person doing the update should have experience that spans the decades so they can easily understand both new and old code.)

So this coder will need to go in and update all of that old code. It probably won’t even compile on a modern setup. Languages and conventions change, and there’s also dependency problems to worry about. Once they get it to compile, they might need to replace the sound system, or the rendering system because they’re so old they just don’t work right on modern machines. You might also have problems with the game data, or input devices (good luck if the old games used those old flightstick style joysticks) or a dozen other small but annoyingly complex things. 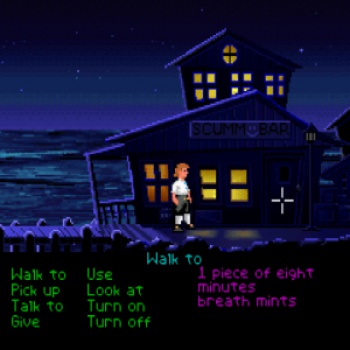 So, you’re spending time and money just to have the game that already existed, except now updated to work on modern machines. It will still look, sound, and play like an ancient game, but at least it will run without causing headaches.

Is that the best way to use the franchise? Is this what the public wants? Maybe they want more than just a version that runs. Maybe people are looking for a graphics overhaul like they did with Monkey Island. Same game, but with modern graphics, a musical score, controller support, voice acting, and a proper console release. This is probably more economically viable, since the console market is now where the action is and it will be easier to sell the game to a new generation if the graphics are pleasing. (Those of us who played the game back in the day are fine with the old graphics, but for someone new it’s just blocky and ugly. Sure, they would probably love the original game if you could get them to play it, but getting over that initial hurdle can be hard – especially if they have to pay for the game before they can find out how fun it is.)

But is this the right way to go? Now you’ve got a game that might appeal to a new audience, but what about the old one? Some of them still have the game and don’t need to buy it again. Some people already know all the jokes, all the tricks, and the solutions to all the puzzles, and just don’t see the need to run through it all again.

Maybe the people asking the industry to “Bring back Grim Fandango” don’t mean, “Release the same game again”. Maybe what they want is more Grim Fandango, Full Throttle, or The Dig. Maybe what they really want is to have more entries in that series. So maybe instead of re-making the original, you should be making a sequel. Or maybe just do a reboot, where you keep all the stuff that people loved, and then replace all the stuff that seems annoying, quaint, or ill-advised today.

But this leads to a more serious problem: All you have is the right to the IP. You don’t actually own the people who made the original. The best part of Grim Fandango‘s Manny Calavera wasn’t that his head was shaped like a tube of lip balm. People loved him because they were invested in him and the world he lived in. They liked him because he was well written, and if you write something new it’s probably not going to feel like the original unless you get the original writer.

Don’t believe me? Imagine if someone had given the Harry Potter books to the person behind Hunger Games. If the author of Snow Crash was given the Percy Jackson series. If Michael Crichton had been given the job of extending the Lord of the Rings into three more books. It’s not enough to have a good writer. Even if you’re lucky enough to have a skilled writer, your sequel or remake won’t feel like the original if you can’t capture the spirit and tone of the original. Videogames have a hard time just telling a story that isn’t offensively stupid, dull, or pretentious. Now you’re trying to re-make something that became famous specifically because it was so much better than the rest of the industry and you’re going to do it by having one writer imitate another? Good luck with that.

You’ve got an IP that is beloved by a small group of longtime gamers and you want to somehow turn it into money. Some people just want a replacement copy of the old game (Thief Gold), some want a modern HD version (Secret of Monkey Island), some want a modernized sequel (Doom 3), others want a reboot (X-Com) and the vast majority of people know nothing about it except that they once knew a kid in grade school who was really into it. Figuring out which group you want to go after is an interesting exercise in guesswork, wishful thinking, and blind luck.

It’s cool when it works out, though.

Shamus Young is really looking forward to the Mass Effect reboot in 2027.