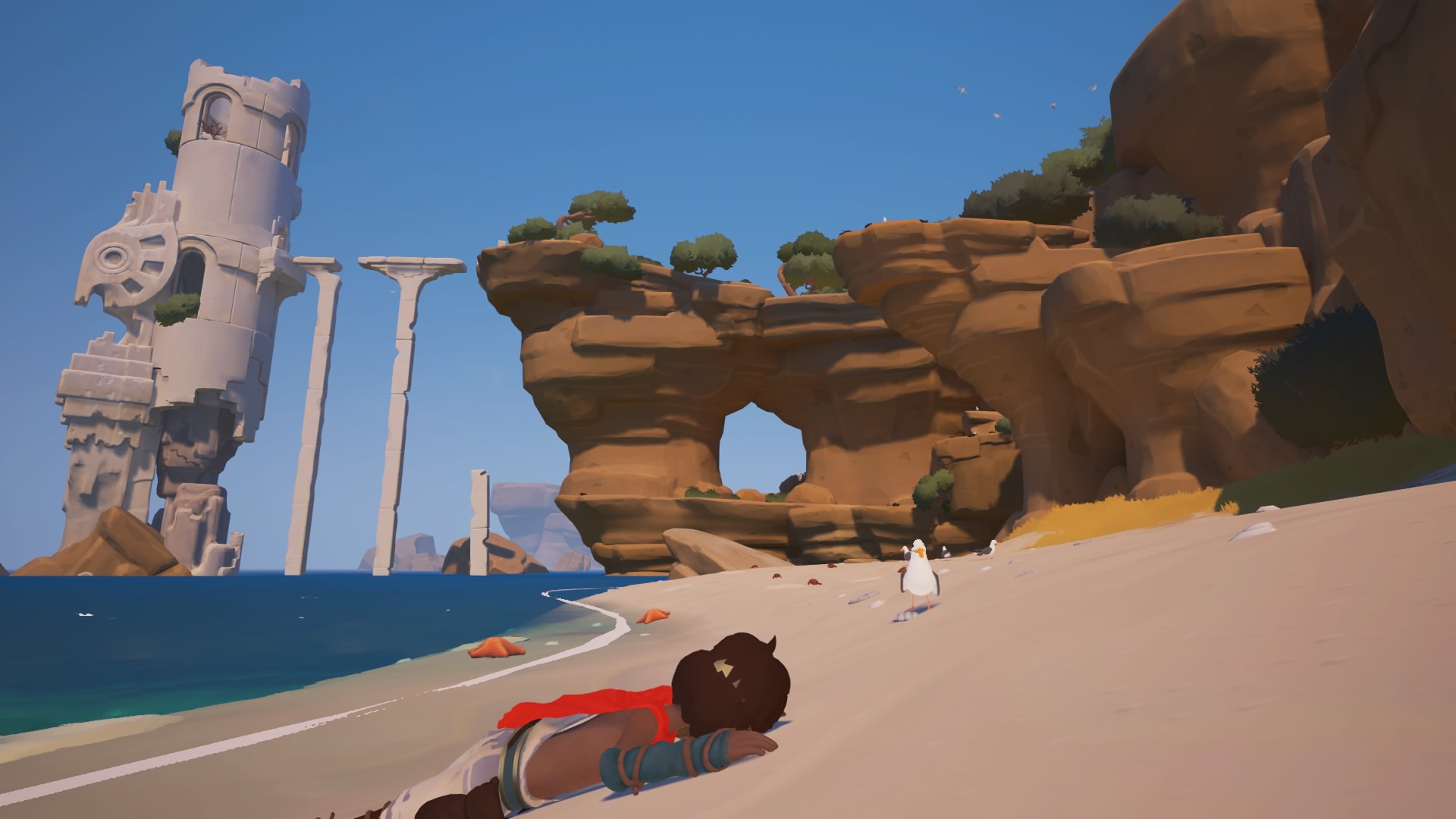 Solve the many, many puzzles of RiME with our step-by-step puzzle guide, with detailed explanations revealing how to complete every challenge of Chapter 1.

Waking up on a mysterious shore, you’re given very little instruction as you explore. Some of the puzzles can get pretty tricky, and the solutions aren’t always especially obvious. Sometimes you’ll need to use shouts to activate statues, find hidden passages, push sun-altering dials, or use keyhole devices to align gold objects.

There are new puzzles and devices to learn all around this starting chapter. You won’t encounter any dangerous enemies. Not yet, anyway.

From the beach, move left and swim toward the shore down the cliff path to encounter your very first puzzle area.

In the valley below, you’ll encounter a white stone statue with four smaller statues around it. To complete the puzzle, you’ll need to find four statues in the environment – each statue is marked with a bright blue beam of light.

Statue #1: The statue up the hill (to the left and back) from the central statue garden is guarded by a big angry boar. To calm him down, cross the bridge and collect a fruit from the tree. Carry the fruit over to him and drop it when he’s interested. While he’s eating, you can walk by safely and interact with the glowing statue on the pedestal.

Statue #2: The second (or first!) statue you’re likely to spot is to the right of the statue garden, on an unguarded platform. There’s nothing to stop you here. Just walk up the steps and use it. 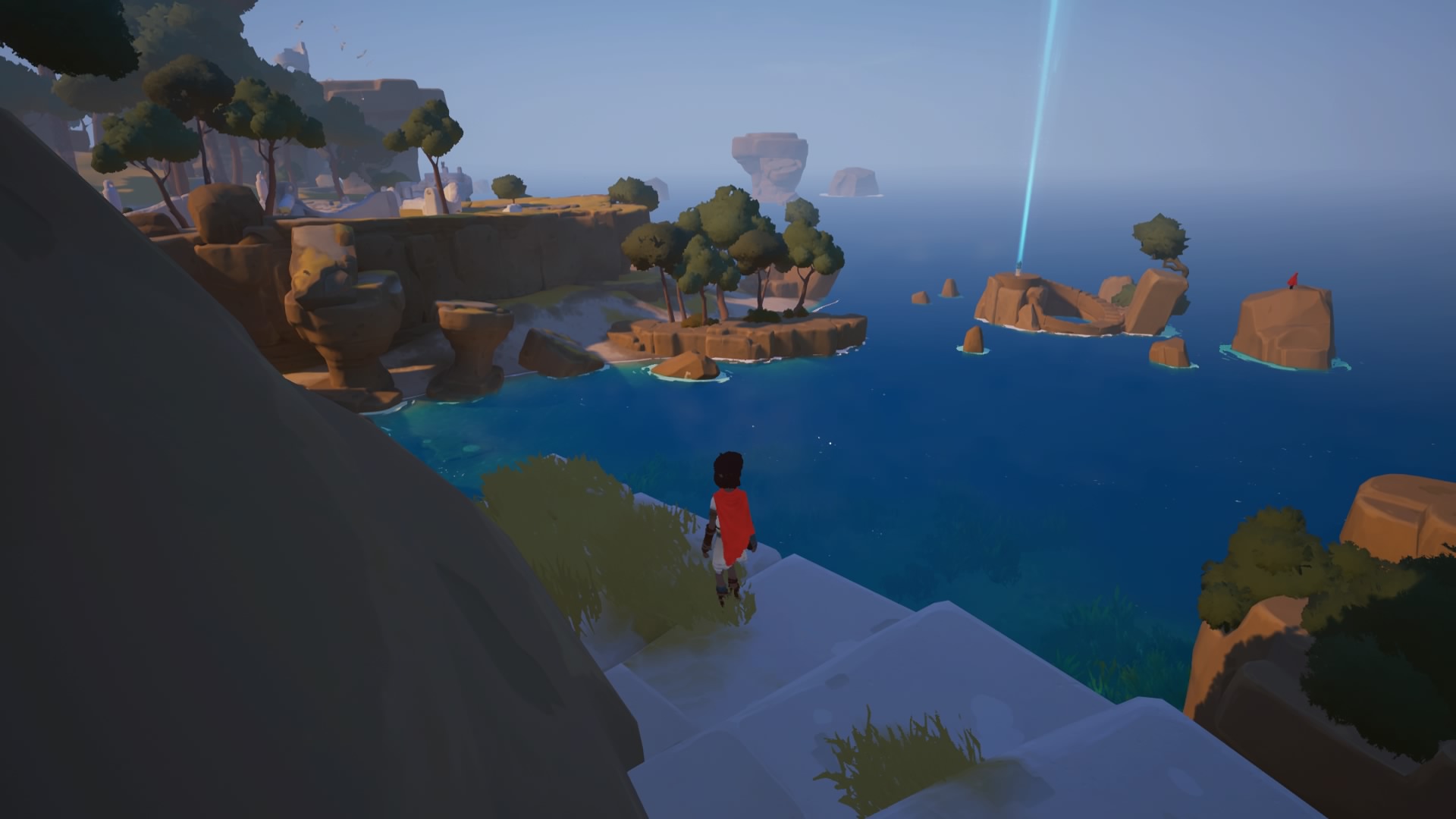 Statue #3: Behind the first statue (the one with the boar) there is a narrow ledge. Follow it and jump across the gap, then continue down the path, climbing the ledges marked with white chalk and using the brambles to wall-climb to the top. You’ll encounter a white tower with a red figure in the doorway. The statue is inside the tower.

Statue #4: The last statue is on a small island far to the left of the valley. Starting from the statue garden, go directly left to reach the beach. Swim to the island, then dive around the right edge of the circle to find an underwater path to the center. Once you surface in the center, you can climb up onto the white chalk-marked ledge.

Now, return to the fox statue and give another yell. It might take two or three yells – just make sure all four glowing statues disappear. When the Fox statue is fully-charged, a spiral staircase will appear, leading up to the ledge you couldn’t reach. 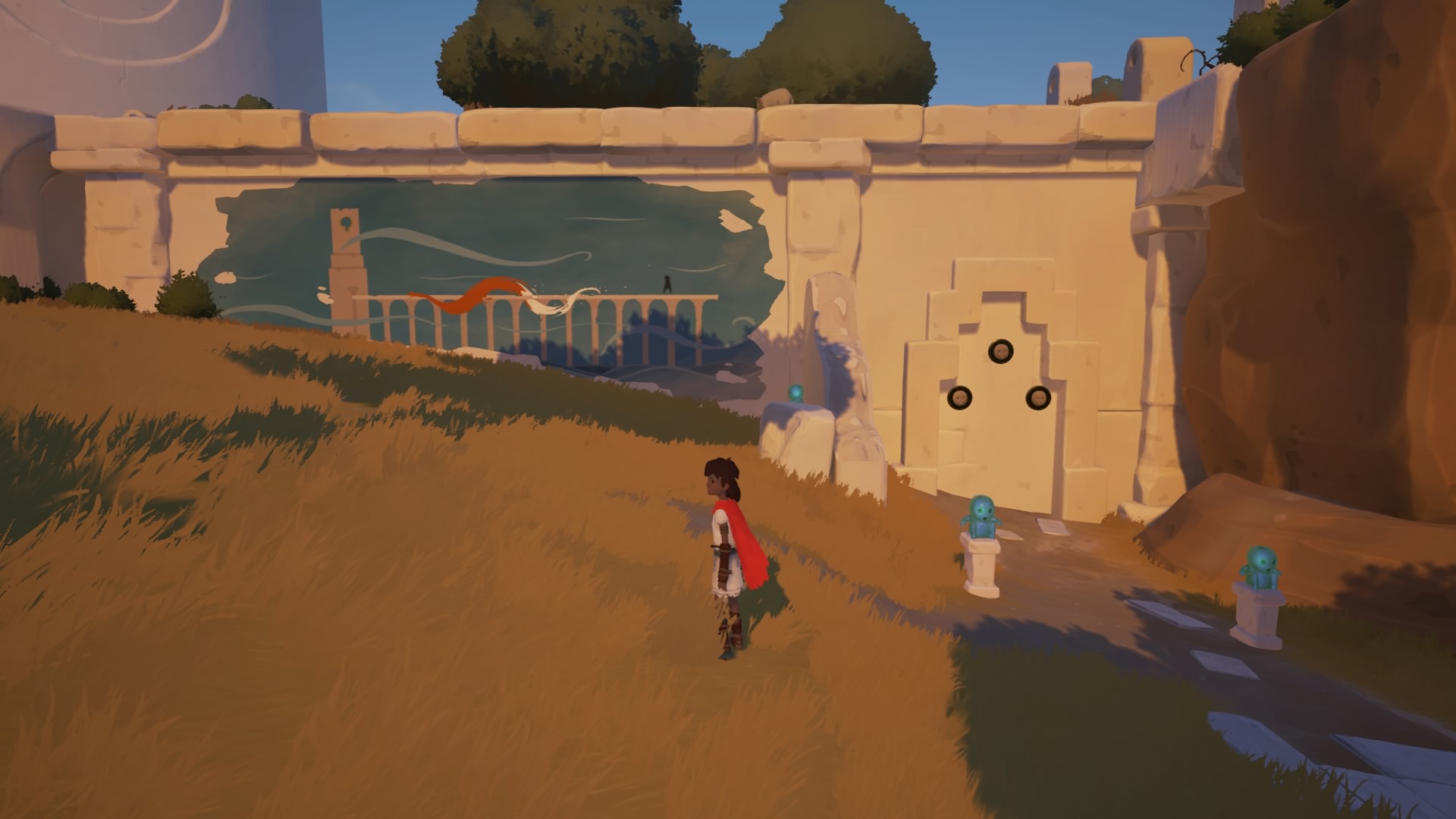 Encountering the fox, he’ll lead you to a locked door. Shouting will activate the glowing statues – but there’s a trick. You don’t have enough time to run to each statue and activate them. Here, you’ll learn that your shout has range.

Your shout can reach statues behind objects and effect any statue that’s lighting up. Stand near the left of the pair of statues and shout, then run to the square block and shout again. You don’t need to go around it, just shout when you reach it – the shout will activate the third statue.

If you’re quick enough, the door will disappear. 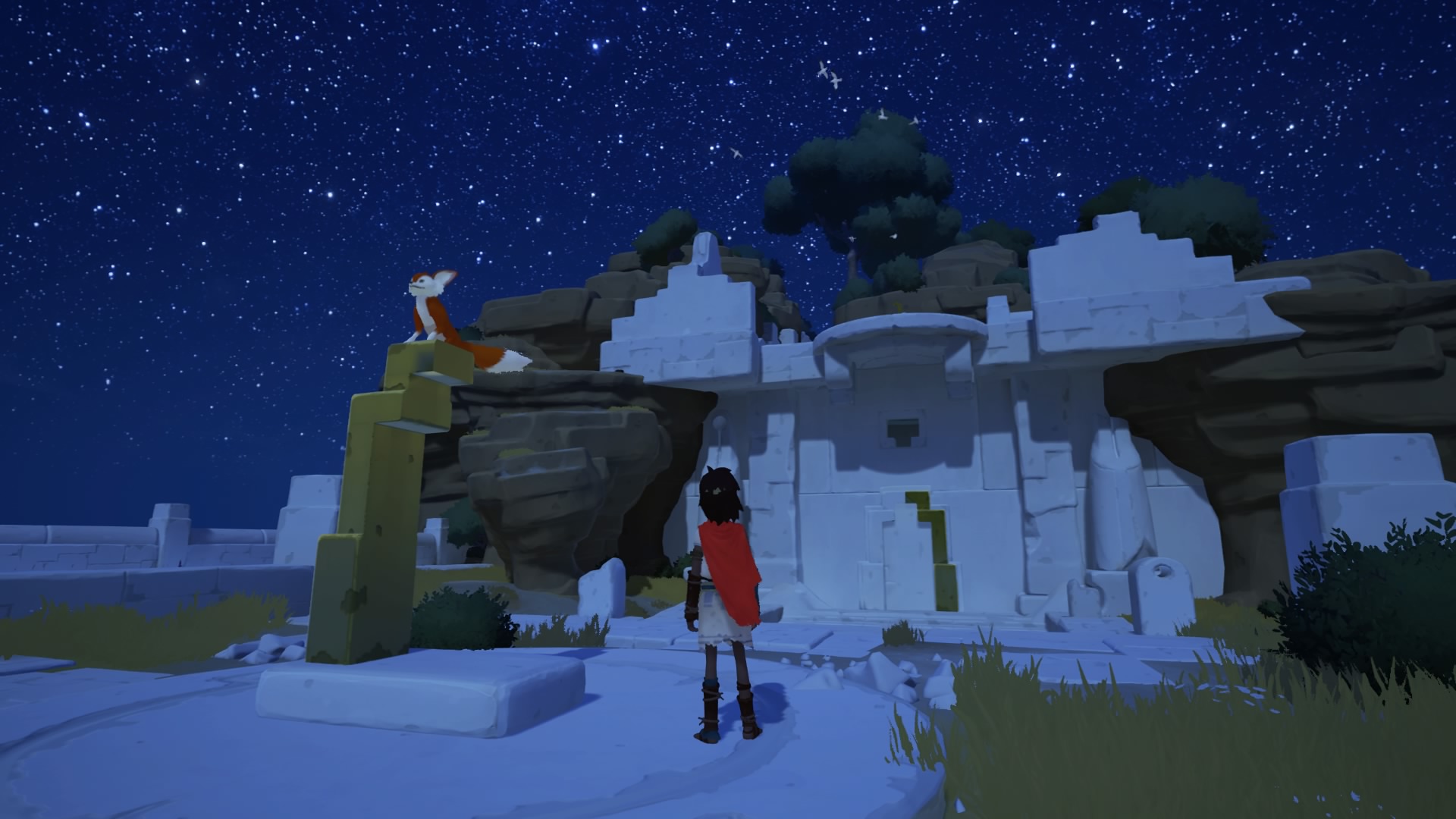 In the very next area, step onto the large stone causeway to find a strange device on a pedestal. Interact [Square / X] to view through the keyhole, then align the glowing sections of the door until they glow and reveal a real door.

Enter the tower and drop down, pushing the box to the right side of the pillar so you can climb up to the opposite end of the foyer. Up above, there’s a second (and more complicated) keyhole puzzle.

Before using the keyhole device, use the box (with the gold door piece) and move it right, then forward. If you look at the sunken floor area, you’ll see a gold marker with two dots – just like the box. Move the box onto this emblem to remove the door. 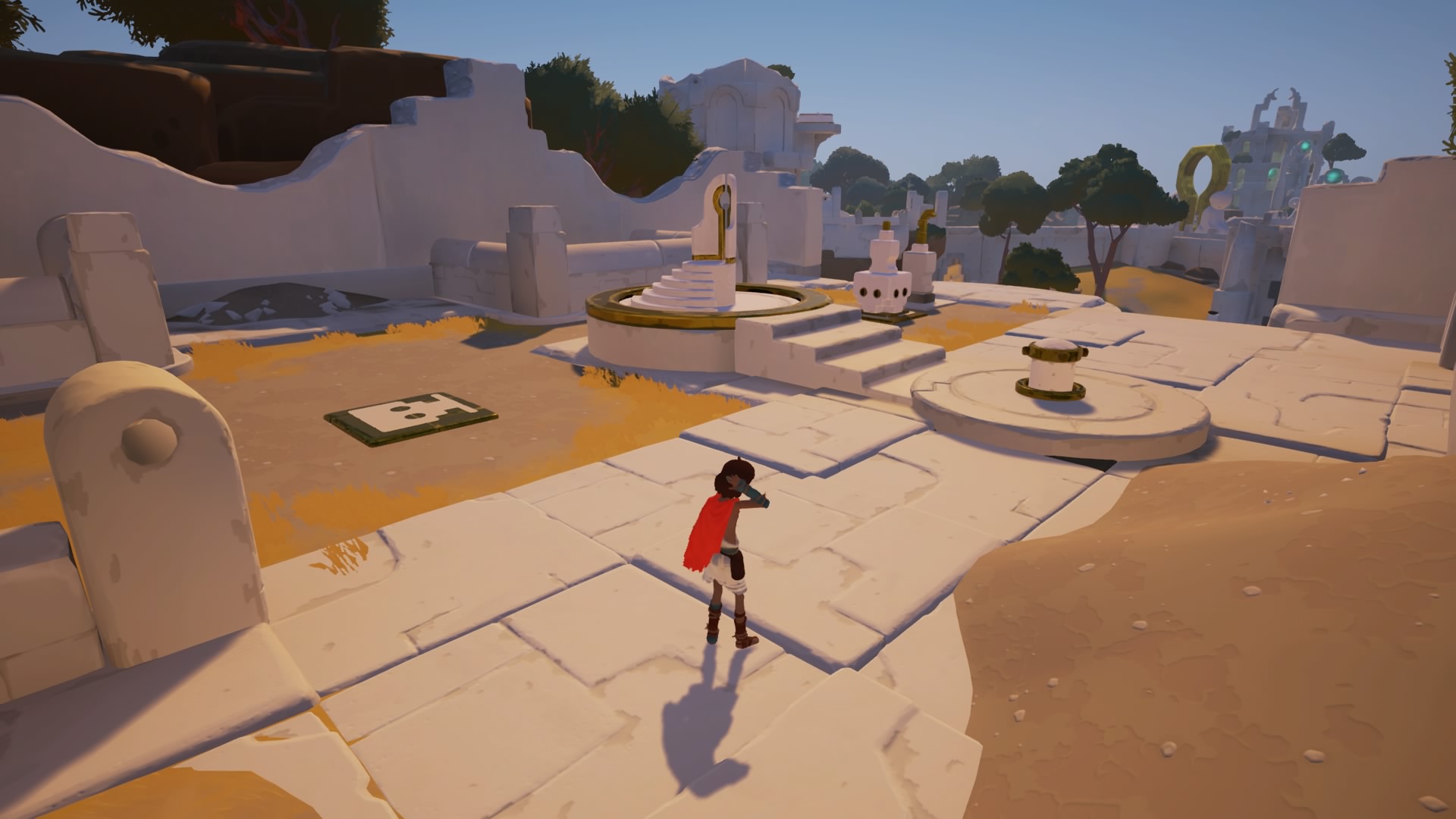 On the upper level, you’ll encounter a more complex keyhole device puzzle. Here, we’ll learn how to alter and add to the gold geometric shapes you’ll need to complete doors.

Interact with the turntable to the right of the keyhole device. Turn it toward the door you entered through – if you look closely, you’ll see the entrance door has a gold section.

Now you can place the movable box back on its original marker, turn the turntable so the keyhole faces outward, then align the gold shapes to create a door in the far distance. 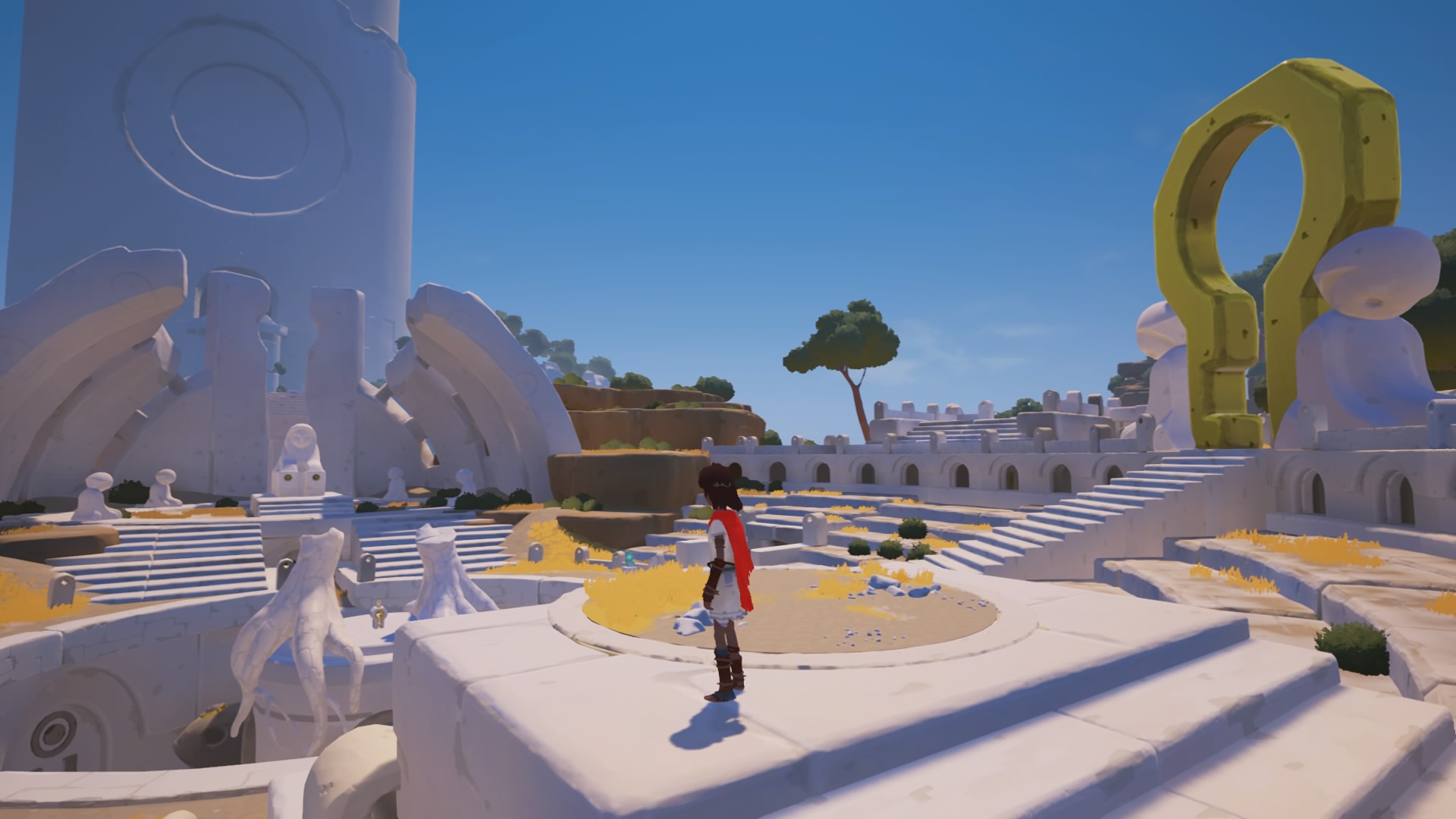 Through the massive door that unlocks from the previous puzzle, enter and use the key to reach the complicated main puzzle of the chapter. Let’s get started.

Key #1: Take the bridge near the gold statue to reach a bridge guarded by a boar. Use fruit to bust through the brambles (toss the fruit and lure the boar) to open the spirit door. Ahead, take the ancient orb and place it on the pedestal, then toss it across the gap to place it on the second pedestal and unlock the door. 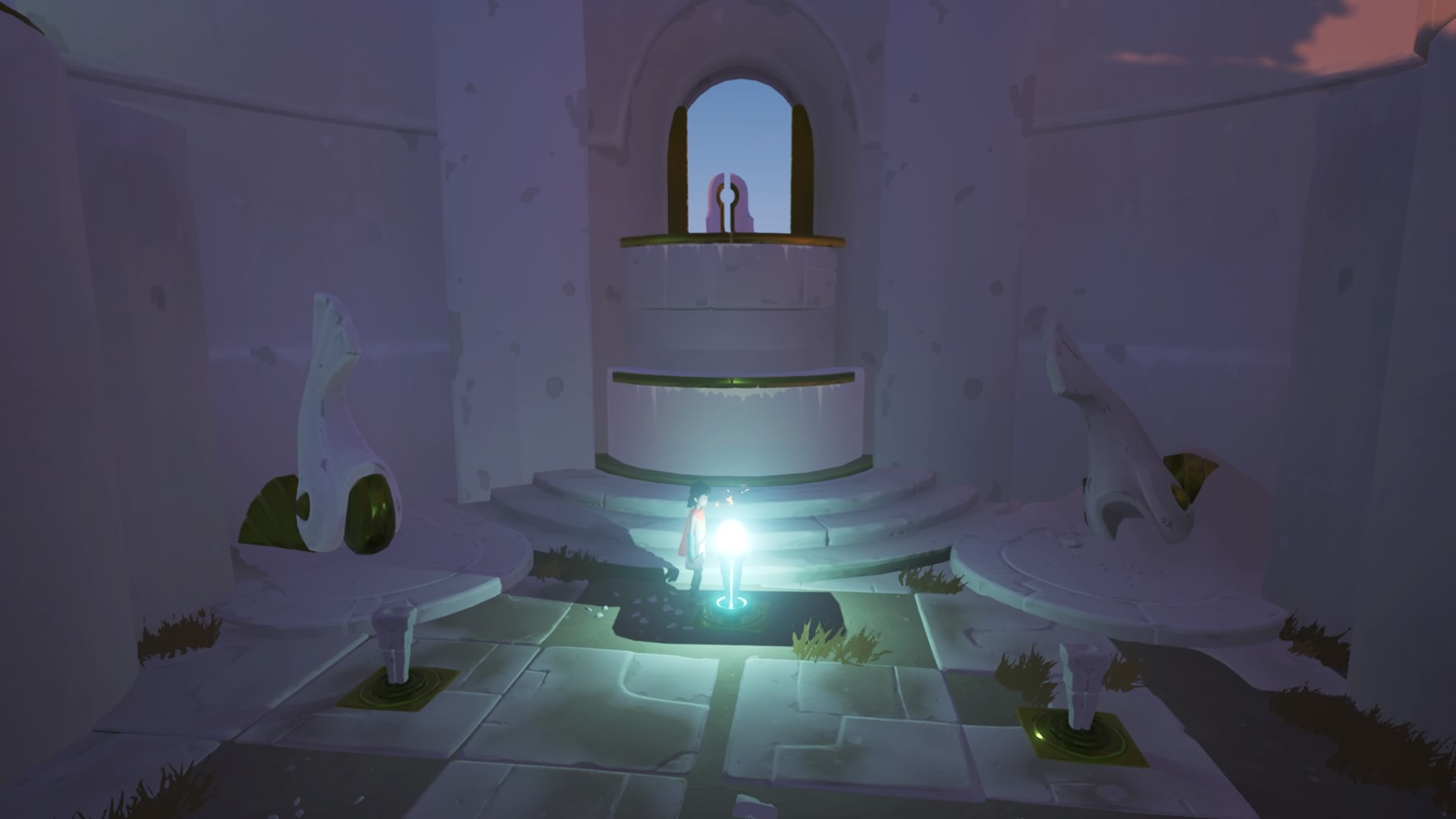 Climb up and use the keyhole device. Align the key in the hole, and your first key will appear. 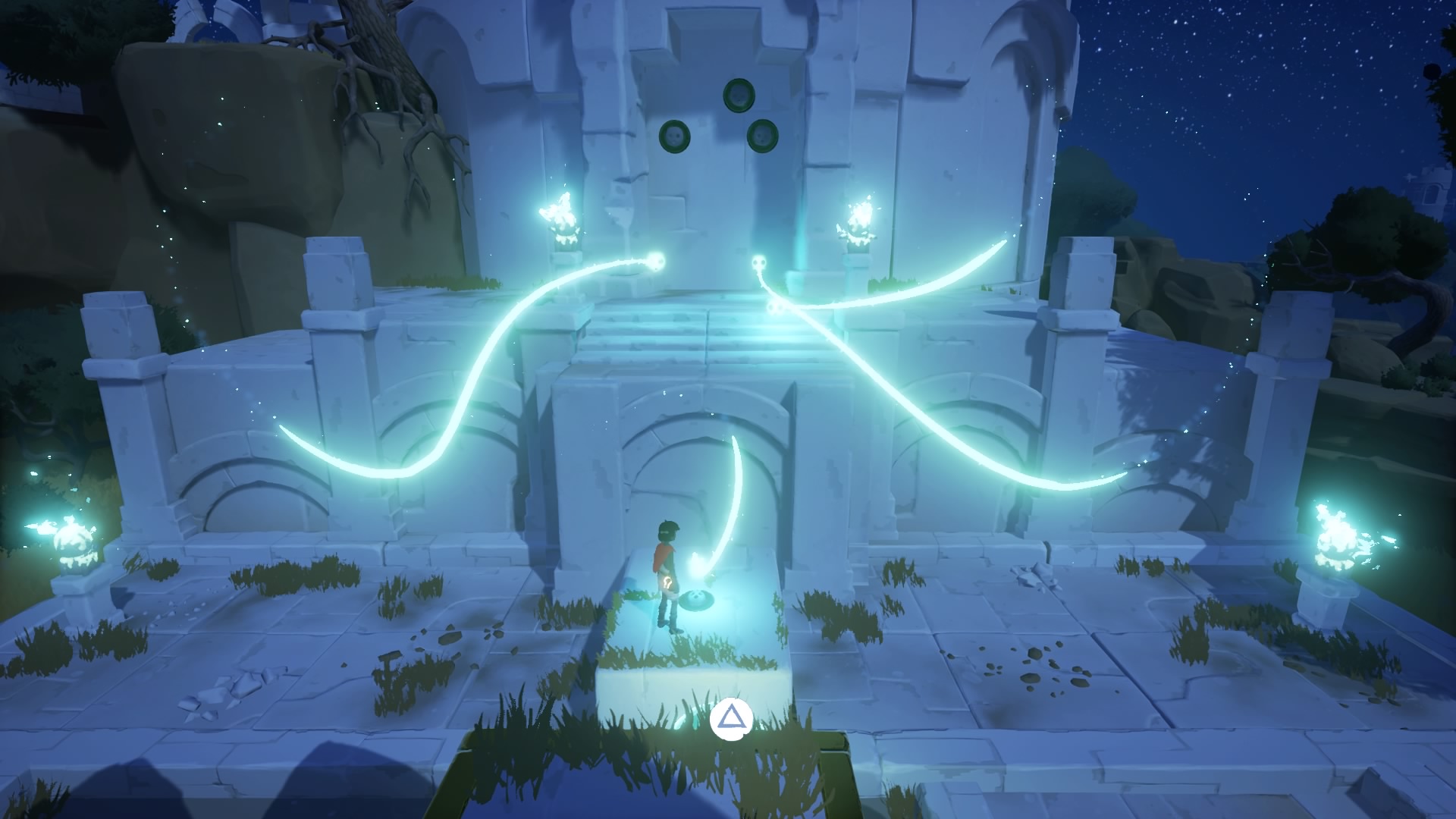 Key #2: To get the second key, follow the large gateway-like structures holding massive blue orbs. They lead toward a tower with a broken bridge. Use the lower bridge to access the tower and you’ll encounter your first puzzle. 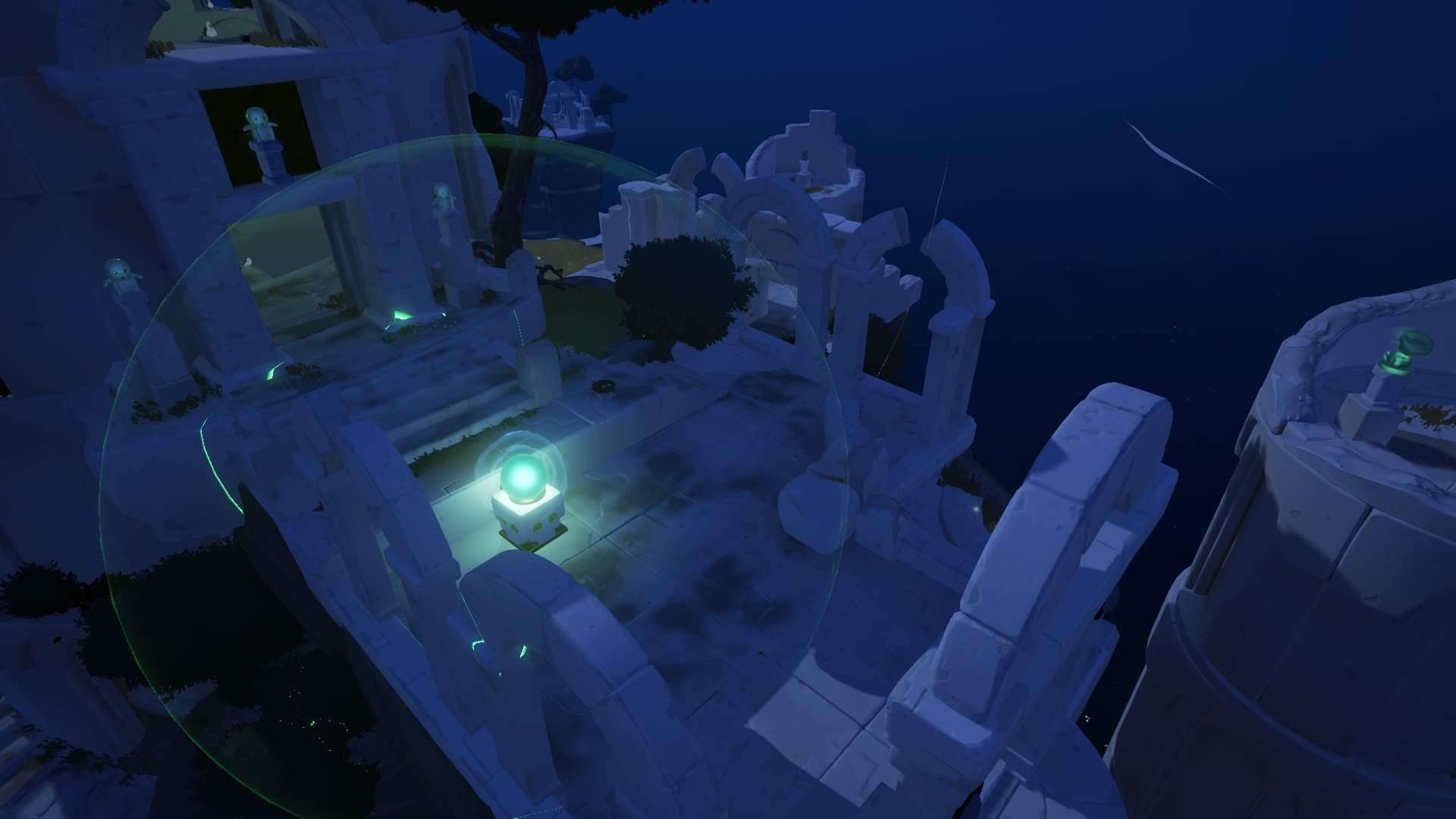 To raise the pillar in the tower, move the crate toward the back-left and shout to swivel a panel above the entrance to this balcony area. Quickly move the block back toward the door and shout again to activate all three soul statues. You can shout even when you’re still holding onto the blue orb block.

Climb to the very top of the tower and shout – the amplifying effect will activate the three soul statues in the theater, causing the water to raise. Return to the center of the theater to swim to the middle and grab the second key. 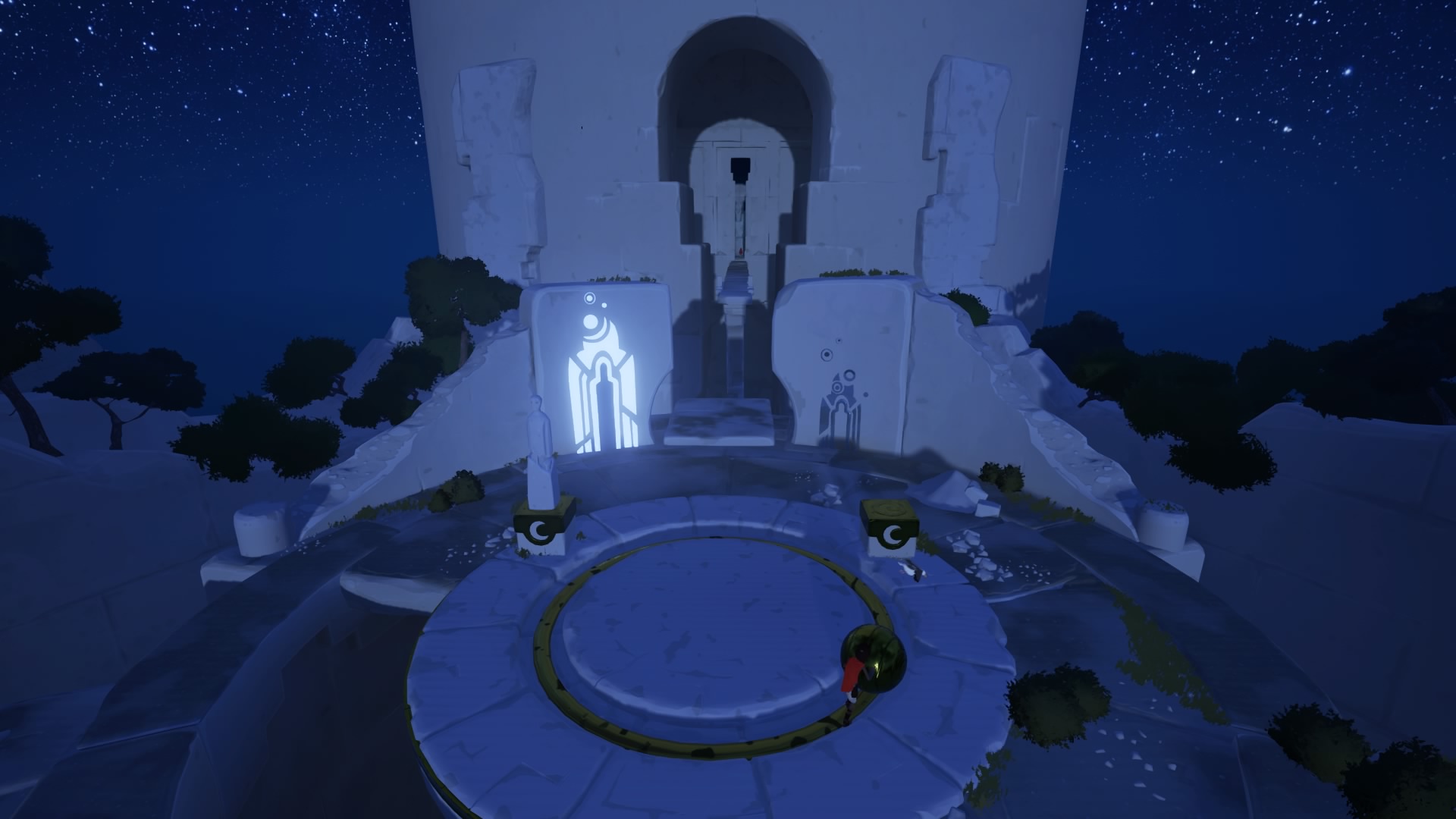 Outside the massive tower, you’ll find a strange sundial that lets you change the position of the sun. To solve the puzzle, you’ll need to project a shadow onto both human-shaped silhouettes. Move the golden orb until the moonlight projects a shadow from the statue onto the left human-shape.

But what about the right symbol? Use the kid! Stand on the right moon-crate and your shadow will fill the empty space, creating a bridge to the massive tower.

Light In The Darkness 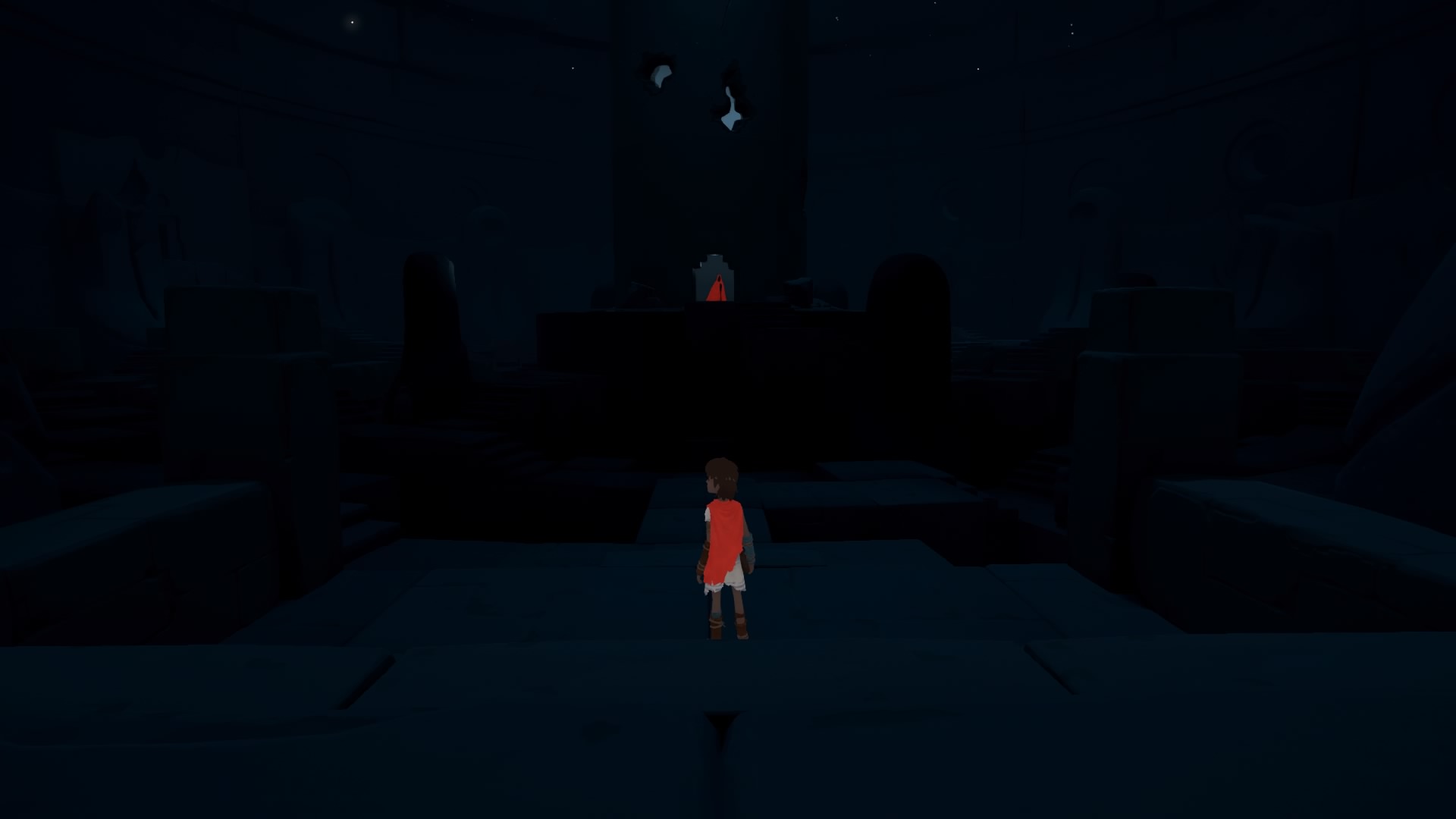 To progress inside the tower, find the large doorway in the inner ring blocked by a soul pot. Shout to smash the pot and enter a large, dark chamber. Here, the floors will light up. Stand near the large devices and shout to add more light to the area.