I liked the 2013 Tomb Raider reboot. My only real complaint was with the story where you spent most of your time trying to rescue the least interesting character, and the writer’s over-reliance on Lara acting like a dunce in cutscenes. Now the second game in this series is out, and both problems are basically solved. Okay, Lara is still a bit of a screwup in cutscenes, but way less so than last time and no worse than other games in this time period. (The problem of how you engineer setbacks for the player without resorting to cutscene incompetence is a tough one, and also a subject for another day.)

What I keep hearing people say is the gameplay of Rise of the Tomb Raider is pretty tight, but the story is “boring”, “clichè”, or “basically the last game all over again”. People variously call it predictable, obvious, or derivative. While those things are technically true, I don’t think it’s an actual problem with the game.

More than anything else, I’d call this story very “arch”. It’s assembled almost entirely out of adventure story tropes. And that’s not a bad thing! Tropes are not bad. Tropes are tools. Indiana Jones and Star Wars are trope-y as hell, and indeed the way they repurpose the tropes of the past is a big part of their appeal.

No, the problem with Rise of the Tomb Raider isn’t that the story is too familiar, it’s that we spend way too much time with it. What they started with is a great minimalist story. It’s easy to grasp, the characters are all distinct and interesting, and everyone has clear goals and motivations. That’s perfect for a game about climbing on stuff and shooting mooks. We just need a brief cutscene once an hour or so to remind us about the long-term goals, and to keep the mood alive.

Instead, what we get is a constant stream of pestering interruptions. Just about the time you settle into the gameplay, the developer grabs the controller away so you can watch another flashback about Lara’s dad. Or a flashback about the bad guys. Or see what your allies are up do. Or what the bad guys are doing now. Or the gameplay stops so you can “play” one of those set-piece disaster scenes where the only thing you’re allowed to do is run forward while scripted explosions go off all around you.

I think Square Enix bought themselves a cutting-edge performance capture studio, and now they’re pushing their developers to make use of the dang thing to justify that expense.

Even when you’re allowed to play the game, the designer is often kind of tyrannical about how you’re allowed to solve problems. Sometimes you’re forced to do something in stealth. Sometimes you’re forced out of stealth (in a cutscene) and are forced to fight. Then you’re allowed to do a little more climbing before another cutscene pops up and the cycle repeats. You’re constantly being yanked from one activity to another, and aren’t ever allowed to simply settle in and enjoy the game. It’s like watching someone channel-surf for hours. After a while you want to grab them and scream, “JUST PICK SOMETHING ALREADY!”

But if there’s one thing that would make the game feel less hyperactive, it would be cutting down on the number and length of cutscenes. They’re usually not long, but there are a lot of them. If the game wants to let me know I need to sneak by some guys, it doesn’t just have Lara say, “I need to sneak by these guys.” Instead, it grabs the camera and introduces the scene movie-style. Then it introduces the player’s goals before returning control.

I talked about this back in 2014, when I pointed out that Square Enix had put a bunch of needless, unwelcome, overly expensive cutscenes into a the Thief reboot. I think Square Enix bought themselves a cutting-edge performance capture studio, and now they’re pushing their developers to make use of the dang thing to justify that expense.

The problem is that these frequent cutscenes break the flow of gameplay. (This is particularly true if you focused on the main story and saved the the optional tombs and item-collecting stuff for last. And to be fair, that’s apparently how the developers intended you to play the game, since Tombs are usually locked when you encounter them and you need to backtrack all the time if you actually want to do them.)

The extra cutscenes don’t add anything to the game, and in fact they have us spending entirely too much time with a story that fits much better as context and mood than as a feature film. 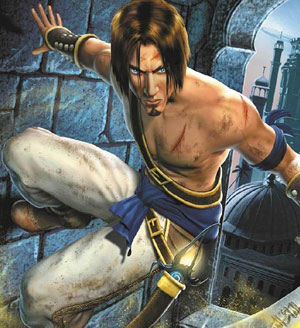 It’s not like I’m asking for something unreasonable here. Prince of Persia: Sands of Time is the high-water mark for this genre, and this is exactly how it handled story. Once the introduction was over, we could go for an hour or more before we hit another cutscene. It was a straightforward story with just three characters and a simple object for them to fight over. The game gave us a goal and set the mood, and there was nothing left to do but sit back and let the player enjoy their videogame. People praised the story of Sands of Time, but I’m willing to bet it would not have been nearly as beloved if we’d spent an extra hour of screen time cutting away to the Vizier and listening to him explain all of his machinations to the audience. Sometimes less is more.

In Rise of Tomb Raider, we had a few scenes that established who Konstantine was and what he wanted. And he works really well at first. But then we kept coming back to him so that we could see he was still the bad guy. It’s like someone making you pause Super Mario so they can slowly explain to you that Bowser doesn’t like Mario. The advantage of using broad characters like this is that we don’t need to burn several minutes of screen time establishing who people are, because they click into place as soon as we meet them.

I was hoping that Tomb Raider 2013 was just a little awkward and shy because of the cultural and financial weight it was bearing as the reboot of an iconic series. I figured that the critical and commercial success of it would give the team the confidence to focus on what worked and jettison what didn’t. Instead we find the team once again playing things safe and aping the set-piece driven spectacle of Uncharted rather than embracing their strong core mechanics and establishing an identity of their own.

That’s understandable. Uncharted is popular, and I suppose there are worse games you can copy. But I bring this up because I’m worried the current trend of “The story was too simple” criticism will lead the developers further away from the solution. When they see people complaining that the story is “too obvious”, they might assume the audience is asking for some diabolical Game of Thrones epic of machinations and betrayal. We could end up with even more cutscenes and even less videogame. But I think what we have is just right for this genre. The gameplay is tight, the visuals are wonderful, and all we need is for the filmmaker on the team to take a step back and let the player enjoy them.