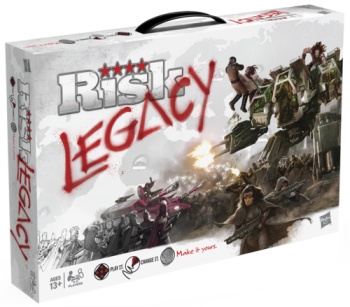 Risk Legacy, a new addition to the venerable Risk board game family, will use stickers, throwaway cards and even sealed spoilers to create a persistent world in which decisions will have a permanent and far-reaching impact on future games.

Risk always starts from zero. You might remember patterns of behavior that your fellow players fall into in particular situations or how they screwed you over the last time around but the actual starting conditions are the same, each and every time. But what if they weren’t? What if, instead, the actions you take in today’s game will be felt in tomorrow’s, and next week’s, and next year’s?

“The design started with an attempt to make a game decision matter, to up the ante, to maybe make you sweat a bit before you do something. We all make plenty of decisions every day. Many are meaningless. Some stay with us forever,” designer Rob Daviau explained on the Board Game Geek forums. “We can move on from these or try to atone or learn from them or even enjoy who we are because of them, but there’s one thing we can’t do: we can’t take them back. There are no do overs in life. Some decisions just make you who you are.”

“This led us to wondering why games always have to reset,” he continued. “Movies and books are static forms of entertainment meant to be viewed but not altered. Games, by nature, demand that the user create the experience. We wanted to push that boundary to have lasting effects. Now you really create the experience. This game is not art to be hung on a wall but a leather jacket to be worn around until it has its own unique story.”

Risk was chosen for the experiment because “nothing happens by accident,” Daviau said. “You don’t accidentally take over South America from your friend. You don’t accidentally drive your brother from the game. It involves choices. And few people approach a Risk game without having the preamble of discussing past betrayals, of alliances broken, of tactics favored by the victorious.”

Risk Legacy takes that aspect of the game one step further by embedding all of those past victories, defeats and betrayals into the game itself. Permanent stickers will be affixed to the board to reflect the actions and outcomes of prior games, while cards are intended to be played and then ripped up and thrown away, although Daviau acknowledged that he doesn’t expect anyone will actually do that. There’s even “sealed stuff” which will have an impact on the game – although what or how that impact will be is a mystery.

“We’re going to ask reviewers not to talk about the hidden contents. I guess I’m asking all of you to be careful with this as well,” Daviau said. “Some are small things. Some bigger. Will the game work if you know everything that is going to happen? Yes. You can certainly go back and watch The Sixth Sense again. But that first time you saw it? That was special.”

The nature of the design means that the first few games are “fast and light,” as conventional Risk tends to be, but then get heavier as more and more games are played. “You are setting the stage and creating the early history of your world. The focus of those games is getting used to changing things. We wanted all the attention on that, not on new rules,” he said. “But, by the end of the evolution? There will be a LOT going on. Lot more strategy and rules and decision making.”

This is a brilliant idea, although it’s obviously best suited for regular gaming groups rather than random pick-up sessions or the once-a-year sit-down on New Year’s Eve. But how well it succeeds will depend entirely upon how closely people are willing to cleave to the concept; if you’re not prepared to vandalize your game board, then you’re probably not going to get much out of it.

There’s no hard-and-fast launch date yet but reflecting the nature of the game, Daviau said it would be released in specialty hobby stores but not big-box outlets, hopefully by the end of the year. More information about Risk Legacy is available at BoardGameGeek.com.