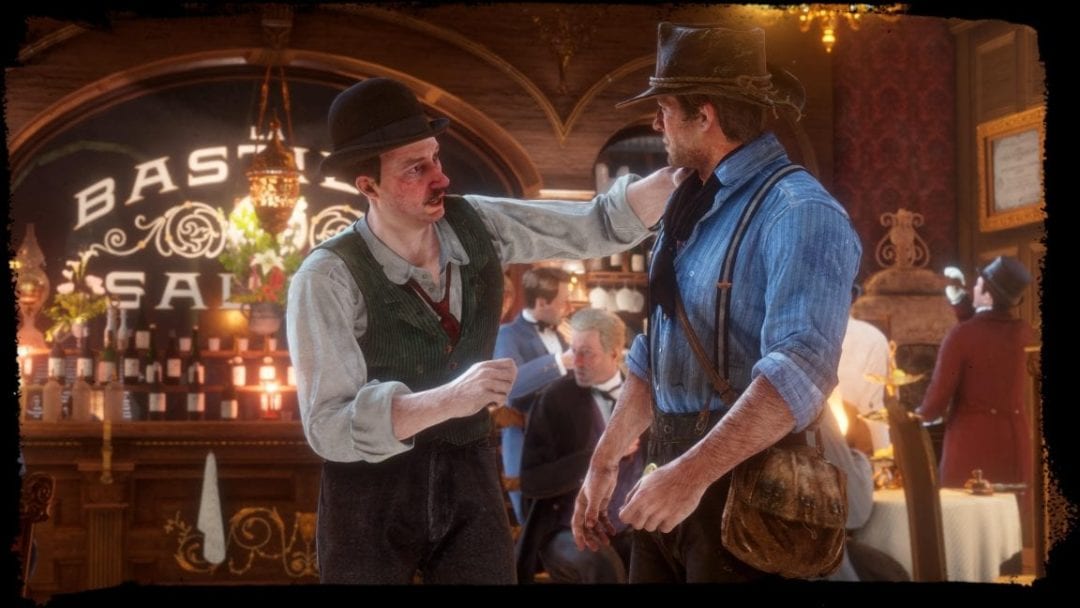 There can hardly be any doubt that Rockstar Games’ Red Dead Redemption 2 has been a smashing success, both critically and commercially. With that success has come a bevy of scandal and controversy, and while some of those scandals are … consistent with what we have seen from Rockstar over the years — for example, a bug that immolates players’ horses mid-journey, and functionality that allows players to murder women’s rights activists in horrific ways — others trod new territory for the company.

One story in particular that caught my attention was a report suggesting that Rockstar’s parent company, Take-Two Interactive, had threatened legal action against UK-based website Trusted Reviews for publishing information about Red Dead Redemption 2’s multiplayer mode in February. According to the report, Trusted Reviews obtained its information from a confidential corporate document and was able to avoid the suit by apologizing to Take-Two and agreeing to donate over $1.3 million to charity.

Leaks in the gaming world aren’t anything new. Video game journalists and publications regularly discover information before it’s set to be released and there’s even a Reddit thread dedicated to the leaks. Some might even say that finding early nuggets of information is one of the primary jobs of video game journalists. It also is expected, and not uncommon, for a leak to lead to a subsequent legal case. For example, last year Wizards of the Coast aided in the prosecution of someone who had stolen and leaked a substantial portion of a Magic: The Gathering expansion.

What’s interesting and unusual about the Red Dead Redemption 2 story is that Take-Two seems to have threatened legal action against the company that published the leak rather than the individual who actually stole or improperly obtained the confidential document. Instead of resorting to litigation, the major video game developers typically tend to respond to leaks by using future information as leverage — i.e., by refusing to sit for interviews and by denying access to press events and demonstrations. In particular, Sony, Bethesda, and Activision, have used blacklisting as a way to punish publications for posting information, and to deter others from doing the same.

So what does that mean for Trusted Reviews? Without additional facts, it’s hard to say with any certainty what actually happened — especially since, as is typical, the exact content of the settlement agreement was not made public. Nevertheless, there are a few possibilities that warrant discussion.

First, it is possible that Trusted Reviews has a contract with Take-Two Interactive that precluded them from publishing any information they knew to be confidential. In the grand scheme of things, that kind of agreement would be pretty unusual. While video game journalists regularly sign non-disclosure agreements with video game developers, those agreements are typically made as part of a “review embargo,” and only limit one’s ability to disclose information about the review copies of the game. Nevertheless, if for some reason Trusted Reviews entered into a more comprehensive non-disclosure agreemen, and then violated that agreement, their settlement would make sense.

Alternatively, Take-Two could have threatened to sue Trusted Reviews for violating the UK’s trade secrets law. (The general contours of the UK’s trade secrets laws are the same as those in the U.S.) Given the lack of information regarding the “confidential corporate document,” it’s hard to ascertain whether Take-Two would prevail on such a claim. The success of the suit, if brought, would depend on the nature of the confidential document at issue; how, specifically, the document fell into Trusted Reviews’ hands, including the extent to which Trusted Reviews played an active role in acquiring the document; the measures Take-Two had in place to safeguard the document and its secrets; and the commercial and economic significance of the information contained in the published article.

In evaluating those factors, it is worth emphasizing that the leaked information included in Trusted Reviews’ article was relatively modest, since it only provided limited details about RDR2’s multiplayer modes. What’s more, the commercial impact of the information was limited, both because the leak seemingly did not provide a commercial advantage to any of Take-Two’s competitors, and because the leaked multiplayer modes were not even included with the game at launch, making it difficult for Take-Two to claim that the leak harmed its sales. This suggests that the trade secrets claim would be relatively weak.

Nevertheless, the fact that Trusted Reviews agreed to enter the settlement agreement signals that the company at least, thought it was in its best interests to do so — whether to stay in Take-Two’s good graces, to avoid the risk of losing a lawsuit, and/or to avoid the costs and burden associated with litigation. (Though it is worth noting that because the case would presumably be tried in the UK, the legal fees would be paid by the losing party if the case went to completion.) It could also be that that Trusted Reviews had a legal insurer who facilitated the settlement and who agreed to pay the $1.3 million.

To some — including me — the uncertainty surrounding the settlement and the factors that motivated it is unsatisfying. We want to know more about what happened and why. Unfortunately, like the question of why horses can spontaneously burst into flame, not every mystery has a satisfying solution.