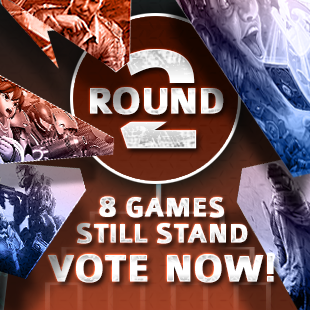 Goodbye Destiny! Sayonara Sunset Overdrive! The first round of The Escapist’s Reader’s Choice Game of the Year 2014 bracket is now complete. Here Begins Round Two!

After a week of frantic voting, the hanging chads have settled to reveal the winners of the first round of match-ups in the bracket. Did you think that both Watch Dogs and Titanfall would be voted out in the first round? Did you think that Hearthstone had a chance against Dragon Age: Inquisition? If you answered yes to all of those questions than you are a smarter person than I! You can see all of the results from Round One – including final vote counts – in the official forum here.

Well, now that the results are in for the first challenge, and it’s time to start voting in Round two. Only 8 games remain in the mix. Which one will be named the Game of the Year 2014. Here are a few of the most exciting matchups. You can head to the official bracket page here to vote on them all.

Middle-earth: Shadow of Mordor vs. The Wolf Among Us

Shadow of Mordor surprised everyone with just how interactive the nemesis system was for taking our orc captains, and even subjugating them to your will. Add in a hefty amount of appreciation for Tolkien’s lore, even if it dealt with themes the fantasist would have avoided, and Shadow of Mordor felt like a Game of the Year, even if it was technically a movie tie-in. The Wolf Among Us took Tellgame Games now signature branching storytelling it firmly established in The Walking Dead and applied it to another wonderful comics series, Fables. Playing as Sheriff Bigby Wolf guarding other storybook characters in a stylized modern New York City over the series’ five episodes was easily a highlight for many gamers this year.

Vote for Shadow of Mordor or The Wolf Among Us and talk about the matchup here.

Like an action-packed romp through a universe full of crazy demons, swinging hair, and high-heeled pistol boots? Then you should vote for Bayonetta 2 because of how successful it is at delivering over-the-top action and a solid performance from a female lead. If a more sweeping fantasy epic is your bag instead, then you should probably vote for the excellent Dragon Age: Inquisition. It’s got everything RPG fans crave and it will likely keep you busy for hundred of hours doing it all.

Vote for Dragon Age: Inquisition or Bayonetta 2 and talk about the matchup here.

There’s two more battles – Super Smash Bros vs. Far Cry 4 and Mario Kart 8 vs. South Park: The Stick of Truth – and those are even harder to call.

Head over to the official bracket and vote now. The vote for the second round will remain open until next Tuesday, December 16th so you have some time. If your game is losing, make sure your friends know they need to vote!