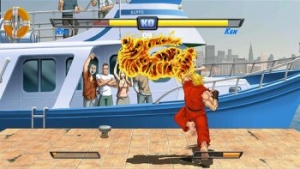 Your virtual street fights might soon become a little easier as Microsoft is reportedly tweaking the 360 controller’s d-pad with fight fans in mind.

As good as the 360 controller is, the d-pad has always needed a little work. Most of the time it’s not a problem, but for certain games – fighting games especially – it can be frustrating to use. If rumors are to be believed, however, the days of being able to (legitimately) blame your loss on the controller may be coming to an end, courtesy of Microsoft’s hardware department.

According to a “trusted source,” Microsoft is working on an Xbox 360 controller with a d-pad that will raise a quarter of an inch when rotated ninety degrees. This modification is said to be aimed specifically at fighting game fans. Unfortunately, the source didn’t say whether the change is intended to become the new standard on 360 controllers or if it’s going to be limited to special, promotional items like the controller brought out in Europe for Pro Evolution Soccer 2009.

2D fighting games are enjoying something of a resurgence at the moment, so an updated d-pad will be a blessing for many. With a number of high profile titles like Marvel vs. Capcom 3 and the new Mortal Kombat on the horizon, this seems the perfect time to give that aspect of the controller some attention.

UPDATE: The rumor has solidified into fact. In a post on his blog, Major Nelson revealed the new controller and demonstrated its transforming d-pad in a short video that you can see below. The matte silver controller will only be available with the Play & Charge kit, and will cost $64.99 when it’s released in the US on November 9th. It won’t be available in Europe until February however, and the price will likely vary from country to country.

“End of the World” LHC Lawsuit Tossed Out