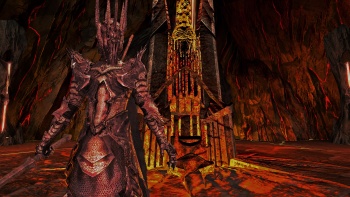 Groups of Lord of the Rings fans may be compelled to form fellowships for their journey to a rumored future Universal theme park.

Sports stars may have a new destination to vacation at after winning major events in coming years. Instead of exclaiming “I’m going to Disney World!”, they may yell “I’m going to Lord of the Rings World!” instead, with Universal Studios rumored to be testing the waters on how people would feel about a theme park based around the property. It could happen.

On a Disney forum, one poster revealed a survey which is said to be obvious in its prodding to see if anybody would want to visit a Lord of the Rings theme park. The survey didn’t reveal anything specific, but asked about “types of rides/attractions, merchandise, [and] walking characters” that such a park might have if it were to exist.

A quote from the survey supposedly read:

Imagine if you will a world unlike any you’ve ever visited before: it’s Middle Earth, the ancient and beautiful land forged by J.R.R. Tolkien as the backdrop for his two most well known creations, Lord of the Rings and The Hobbit. Walk as a human among dwarves, elves, orcs and hobbits-all faithfully recreated and portrayed in the spirit of the original characters as they appeared in both the books and the movies. In this land you’ll experience one-of-a-kind rides and attractions that bring to life some of the most memorable experiences of Tolkien’s world including Bilbo’s hobbit hole, the fortress at Isengard (before it was destroyed) and even the dark world of Mordor-including the terrifying volcanic Mount Doom.

Though this could be speculation and rumor, it makes perfect sense for Universal to develop a Lord of the Rings park similar to that which it did for the Harry Potter series with the Wizarding World of Harry Potter. Both are billion-dollar franchises that people would specifically take a trip to experience more of. But will hardcore Lord of the Rings fans embrace a theme park, or would they decry it as a bastardization of J.R.R. Tolkien’s original works? I’m thinking embrace, once they’ve felt the heat of Sauron’s eye, been bitten on the heels by a man dressed as Gollum, or jumped down into the firey foam pit of Mount Doom.