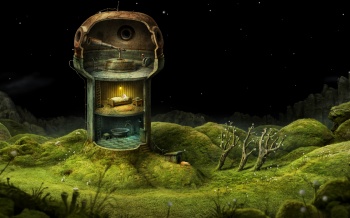 After years of development, Amanita Design’s Samorost 3 launches today for PC and Mac.

More than a decade after the last game in the series appeared, Samorost 3 is available for purchase today on PC and Mac. Amanita Design’s point-and-click adventure series started off in 2003 as a flash game hosted on the developer’s website; two years later, it’s sequel was released for sale and garnered widespread praise. Taking breaks to create the lovely Botanicula and Machinarium, not to mention a children’s film, Jakub Dvorsky and his team have returned to the charming, scary, fungal and adorable world they last visited in 2005.

The series, and each of the design team’s other games, are adventures that set themselves apart largely in the aesthetics. Using a combination of photography and hand-drawn art, they seem at once both real and fantastical. Tomas Dvorak’s score heightens the surreal mood. The main character of Samorost is mute and has no name; the developer refers to them as “Gnome.” Each set piece features environments and characters pulled straight out of a dream.

Samorost 3 is $19.99 on Steam or wherever you buy your games, but you can pay a little more to get a digital art book and the soundtrack.

The First Lego Batman Movie Teaser Has Darkness, A Lack of Parents