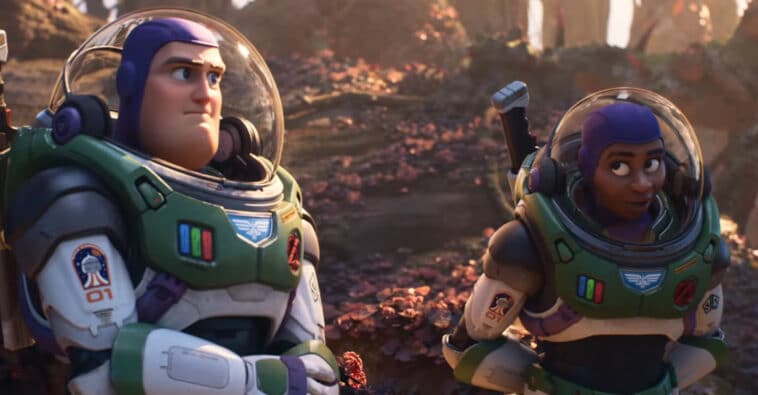 We’re ever so close to the origin story none of us knew we wanted until we got it. Lightyear, the Toy Story spinoff film that ironically turns Buzz Lightyear into a real space person, dropped its second official trailer today after debuting a stunning first one a few months ago, and it is far heavier on plot and new characters.

The film finds Chris Evans taking on the role of Buzz Lightyear, but this time he’s not a toy. As mentioned, the film tells the origin story of the in-world fictional character that inspires the toy, making it a very meta premise. Probably best not to try to analyze continuity with this one and just enjoy the ride as we find Buzz marooned on an alien planet, millions of light years away from Earth alongside his commander and crew. When they think they’ve discovered a solution, Buzz makes a test jump, but it launches him into the future where he must team up with the descendants of his friends and battle the evil Emperor Zurg, whom we’ve seen before in the Toy Story movies.

The voice cast for the new characters is pretty stellar, as one would expect from a Pixar film like Lightyear, with Uzo Aduba playing Alisha Hawthorne, Buzz’s commander, and Peter Sohn as Sox, the robotic cat. Keke Palmer, Taika Waititi, and Dale Soules round out the future cast as Izzy Hawthorne, Mo Morrison, and Darby Steel, respectively. And everyone’s favorite villain voice, James Brolin, plays Zurg.

The first thing that stands out from this trailer is just how action-packed Lightyear is. While obviously geared towards children, this isn’t quite as family-friendly as the Toy Story films, and Pixar seems to be stepping out into a new realm full of lasers, spaceships, and explosions. Hopefully, the different approach for the studio won’t mean we lose the trademark heart and emotional punch that Pixar’s films are known for.