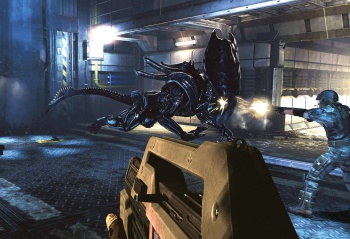 According to Sega, Gearbox’s Randy Pitchford did “whatever the fuck he likes” when it came to Aliens: Colonial Marines marketing.

Anytime we’re talking about a game one year after launch, odds are it was either absolutely amazing or utterly terrible. Aliens: Colonial Marines not only sits among the latter camp, it was so controversial it’s the subject of a class action lawsuit. Now that lawsuit has become a little more complicated thanks to information submitted by Colonial Marines‘ publisher. Sega has filed new documents claiming that developer Gearbox is equally responsible for the marketing that played a role in the game’s downfall.

Sega and Gearbox originally presented demos of Aliens: Colonial Marines at conventions and trade shows that looked vastly different from what players experienced in the finished game. Gearbox later claimed that it wasn’t involved in such decisions, but these documents suggest Gearbox was an equal participant, even making marketing choices without Sega’s approval. Sega’s motion states it originally had “absolute discretion” over marketing, but was contractually required to consult with Gearbox.

“The parties had to mutually agree to the ‘precise particulars of marketing assets’ delivered by Gearbox,” the motion states. “Gearbox’s participation – Randy Pitchford’s, in particular – was a key element in the ACM marketing strategy from the beginning.”

The filing details multiple examples of Gearbox making public and press announcements without Sega’s approval, even after being specifically told not to do so. “I spoke face to face to [Gearbox’s Steve] Gibson about their persistent panel leaking,” Sega’s Matt Eyre wrote in an email to company officials. “Effectively – it’s Randy [Pitchford] doing whatever the fuck he likes. Apparently he did it twice on [Borderlands 2] also, against, against all plans and despite the fact they asked him not to. I think our best result here is that we have no more panel sessions.”

Whether this new information will finally resolve the lawsuit, which Sega had already offered to settle, remains to be seen. The next hearing is scheduled for Oct. 29.

Too Late for Annulment? It’s Time for Divorce! The Game