When Sony issued Update 3.21 on 1 April 2010, it presented owners of fat PS3s with a stark choice. Accepting the update meant accepting the removal of OtherOS, a feature that allowed the installation of other operating systems on the console; declining the update meant forfeiting access to the PlayStation Network (PSN), including the online store, any remaining credit, PlayStation Home, and online gaming. “We don’t say it’s a game console. PlayStation 3 is clearly a computer,” boasted Ken Kutaragi in 2006, but now people had to choose between the two. Disregarding all of its own pre-launch hype, Sony no longer wanted its customers to have both. 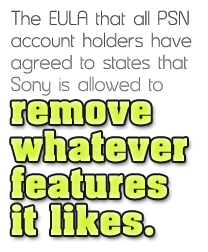 Mark Ashelford, a partner at London law firm Lee & Thompson who specializes in rights issues for digital media, has worked with both games developers and streaming services and likens the current state of the industry to the Wild West. There is a balance to be made between the lawless frontier where “everyone’s taking digital content from anywhere they can get it” and the convenience of managed distribution offered by publishers and games-on-demand services that “take on the role of sheriff, where the consequences of breaching the rules are that you’re kicked out of the town.” But what happens when a sheriff enforces rules that are self-serving or too stringent, or unfairly refuses the right of reply?

OtherOS was at best a niche feature, mainly of interest to hobbyists and researchers (and the US military, which took advantage of OtherOS by hitching approximately 2000 PS3s together into a budget supercomputer and probably didn’t mind giving up its trophy collection). Edge magazine captured the attitude of much of the gaming press when it noted the passing of OtherOS with an offhand epitaph: “Come on, you were never going to install it anyway.”[1]

But surely that is not the point. Whether you thought Sony’s action a prudent response to a potential security threat, a knee-jerk reaction to a perceived attack on its intellectual property, or an opportunistic move to disable a feature it no longer wished to support – each of which has its loud and myriad supporters – it is hard to shake the feeling that there is something a little odd about Sony taking away a feature that people had paid for, whether they used it or not. What’s more, the EULA that all PSN account holders have agreed to states that Sony is allowed to remove whatever features it likes.

One group of PS3 owners was angered enough by Sony’s behavior to file a class action lawsuit, in which they allege that Sony’s removal of OtherOS is unlawful. In its defense, Sony is unashamedly falling back on its small print. In an early hearing, Sony’s lawyers dismissed the claims against it as “inactionable puffery,” arguing that they were “contradicted by the explicit terms of all applicable contracts.” Moreover, “these contracts specifically provide PS3 purchasers with a license, not an ownership interest, in the software and in the use of the PSN” and Sony therefore has “the right to disable or alter software features or terminate or limit access to the PSN.” The case is yet to be decided but the plaintiffs cannot deny they agreed to this.[2]

There’s nothing atypical about the details of Sony’s EULA, but in its willingness to cite its stringent terms in court, we’re seeing an example of the power these licenses actually give the license holder. There’s a clear history of consumer rights law that should protect us from after-sale restrictions or alterations to products we purchase. But with the shift towards digital distribution and internet-enabled DRM, these rights appear to be more readily subject to infringement. 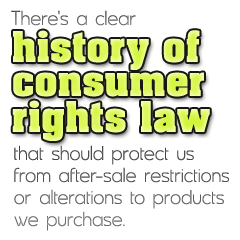 Individual examples abound of lost digital purchases and disabled accounts, most getting little attention beyond the forum rants of the aggrieved. But overall they paint a picture in which game buyers have little recourse against the whims of content providers who cover themselves with the catch-all terms of their license agreements. Here are just three of the more prominent examples: Sony’s post-sale insertion of video advertising into the loading screens of WipEout HD months after people had bought the game without ads via PSN; a temporary EA account ban that locked a user out of his “offline” EA games because the games’ DRM required online access; and a Steam user coming very close to losing a game library worth over $500 and amassed over several years because of a $3.75 PayPal mix-up. In the EA case, the ban was occasioned by a disparaging remark against EA in its forum and, according to EA’s terms, it could potentially have imposed the ban indefinitely and without offer of refund for the games rendered unplayable. Steam’s conditions seem equally draconian: Its user was told that unless he could resolve the issue with PayPal, his Steam account would remain locked and he would lose access to all of the games – despite the fact that only the most recent transaction was being disputed. And again the small print makes it all OK. It’s not quite 1984, but the accompanying and overly familiar mantra of “software as service” has the definite dull ring of Newspeak.

There are always rumblings of dissent. Organizations such as the Electronic Frontier Foundation will continue to cry foul as digital rights continue to be trampled on. In Europe, The Consumer Council of Norway, a government agency, has claimed that Sony breached the Norwegian Marketing Control Act when it disabled OtherOS and it criticizes the license agreement that apparently gave Sony the right to do this. But the fact of the matter is that the legality of most licenses has yet to be tested in court.

Ashelford thinks “there’s a sword of Damocles hanging over these licenses because we all know that the habits of users are that they are never read.” Most gamers are in the habit of tacitly accepting the terms of the latest EULA by impatiently clicking through as part of a lengthy software installation. “Don’t pirate the game,” yadda yadda, click click. These “clickwrap” agreements are assumed to be binding even though users do not need to have read the terms before accepting them. But then what can we be said to have agreed to? In the end, perhaps very little. “There’s a difference between saying ‘I have accepted these terms’ and ‘I have read them’,” says Ashelford, “and courts have already criticized the latter for requiring people to make these false – clearly false – statements. Such behavior almost renders the text of the license an irrelevance.”

Contract law also has the notion of an unconscionable contract – a contract that is “unjust or extremely one-sided”[1] – which a court will not deem legally binding. As Groklaw’s PJ put it in a recent post covering the OtherOS lawsuit: “The question this litigation hopes to raise is this: Would anyone in their right mind agree to buy a product where the company making it might make it stop working – randomly and for no fault on the part of the purchaser? And no refund? I wouldn’t sign such a contract, and neither would you, I’m guessing.”[2] 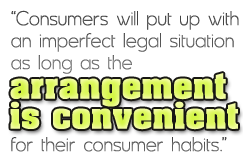 The unreasonableness of many license terms together with the simple likelihood that they are not being read might be their undoing. Ashelford anticipates that “there will be cases brought challenging the licensers’ entitlement to enforce particularly onerous or unusual terms that have been buried.” However, he also points out that “to justify seeking a ruling on this would most likely require a product or service in mass-circulation seeking to enforce a particularly unjust term.” As an example of the sort of thing he has in mind, Ashelford cites the public outcry over Facebook’s announcement that it would retain rights to uploaded images even after users had removed them or deleted their accounts.

The trouble is our complacency and bit by bit we may well let the situation slip. Ashelford notes how “consumers will put up with an imperfect legal situation as long as the arrangement is convenient for their consumer habits.” Perhaps the games industry is due its Facebook incident and perhaps we’ll see what the courts have to say about all the things we’ve blithely been agreeing to. But in the meantime we should push for licenses to have a higher public profile that encourages scrutiny by the press, user groups, and consumer watchdogs. Time was you knew exactly what you were paying for when you handed over money and took home your game. It’s not so clear cut right now, but it needn’t stay that way.

Douglas Heaven owns a fat PS3 and Wipeout HD and liked them both better before they changed.