There’s a horrible myth that gamers have trouble finding love. It’s the unfair assumption that the fairer sex doesn’t dig on the pale and spongy amongst us. Living in New York I know this to be false. I’ve seen super models and super hot super geniuses cavorting with investment bankers and Wall Street types, people not unlike ourselves in the sense that they sit in front of monitors all day playing games. What I realized, from my observations, was that the feats of strength that once defined what was desirable in a mate, skills like otter clubbing and snake venom extraction, were no longer relevant in the face of lots and lots of money. Now, I personally don’t have a lot of money but it’s not inconceivable that some gamers would, like Richard Garriott before he vaporized all of it under the vodka infused flame of a Russian space shuttle.

Armed with my new knowledge, I decided to find a woman worthy of my attentions. My friends suggested the casual encounters section of Craigslist. This section, as it turns out, is a place where the vice squad and prostitutes vie for the attentions of lonely men with varying degrees of creativity. Where was the mystery I wondered? This was no fun, I knew exactly what I would get and how much it cost me per fifteen minutes. A more mainstream dating service was clearly in order. Having found such a site, I created a profile of myself that conveyed three things: an interest in videogames, a large trust fund and a love of city tap water. One of the respondents was a videogame and dog lover, which was great until I found out they meant this in the romantic sense with dogs and god knows what sense with videogames. The other respondent was a bar tender named Annabelle who shared my love of city water and said she preferred hers treated with fluoride. Similarities like this aren’t mere coincidence, so this past weekend Annabelle and I had our first date.

First impressions are important, so I put on a Harris tweed sport coat and my homemade, “Rock out with your Contra out” T-shirt. The last time I wore cologne was in eighth grade, but I felt this occasion deserved it. So instead of rubbing the deodorant stick on my wrists and neck as I usually do, I went big and purchased some Drakkar Noir. In addition to its distinctive musk, I thought it would carry a certain ironic memory of Ferraris and the 1980’s. Upon meeting Annabelle in Union Square it became evident, from the expression on her face, that it did indeed convey the 1980’s, namely the parts we’ve all tried to forget. She did compliment me on my shirt.

No matter, I thought, because if scent isn’t the way to a woman’s heart then surely dinner is. There are a lot of great restaurants in New York City: Le Cirque, Masa and Per Se just to name a few. Knowing this, I took her to Quiznos. Now granted Quiznos offers one of the finest selections of toasted sandwiches in North America, but my choice was actually motivated by my desire to show her my adventurous side. The side that says, “Hey, expensive restaurants are great, but have you ever had lunch for dinner?” I won’t go so far as to say she enjoyed her meal, but she definitely ate it. I suspect she may have been a Subway girl. Bellies full, to varying degrees of satisfaction, it was on to our next destination.

I knew of a secret arcade in Chinatown where only the most exclusive Virtua Fighter players are allowed to play. I decided to take her there, to show her the real gaming scene, the one they don’t show you on television. Although, in all honesty it’s not a whole lot different from what’s on television or even what goes on in your living room. I had decent directions and figured the map I printed out could do the rest. At this point, as a kind of public service announcement, readers should know that Google Maps has no provenance over Chinatown, and don’t let anyone tell you otherwise. During our search for this arcade we saw many things including a horrible hybrid between a koi and a catfish that ate pennies for good luck, a civet getting vaccinated for SARS and an exhibition cock fight in which both of the roosters were muzzled and their spurs capped with gumballs. When we got to the arcade it was somehow sadly mundane. 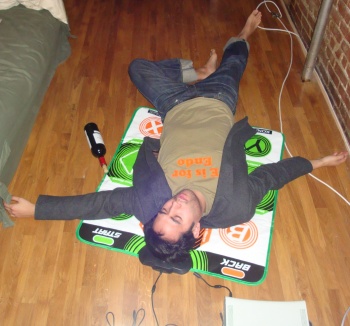 We sat down across from the main cabinet and I procured a wine cooler for Annabelle and a Miller Ultra Light for myself from Leon, the club proprietor. Annabelle shook her head in disbelief. Apparently wine coolers and Miller Ultra Lights don’t carry a whole lot of cache among mixologists. So she did me the favor of getting us Redbulls with a doubleshot of vodka. I’ve never had a Redbull and vodka before, but the feeling it inspired was somewhere in between euphoria and tweaked out. I’m not saying it feels as good as ganking someone in World of Warcraft then squatting over their corpse, because nothing will ever – well, actually I’d rather have the Redbull and vodka from now on. After a few drinks Annabelle had clearly loosened up as well, and decided to jump into the Virtua Fighter rotation.

For those unfamiliar, Virtua Fighter is an extremely technical game. The people in my arcade have practiced for years with the same character learning not only the moves, but the situations in which to use them and the number of frames it takes to execute all these moves. At its best it’s an improvisational dance between two highly skilled people and only the ignorant or extremely tenacious would attempt to join in this performance. That night Annabelle showed us a third path to participation – the path of the button masher. Within half an hour she had button mashed her way through the three best players in the arcade. It was when the wallets came out for bets that I realized I needed to either rethink my choice in fighting games or start button mashing more.

At this point in the night we were both fermented potatoes with wings flitting about town. The normal thing would’ve been to end the night playing Guitar Hero at a hipster bar or maybe brave the lines of a trendy club. I wouldn’t say going for the abnormal has ever worked in my favor, but eight Redbull and vodkas deep is not a place you willfully journey to for normalcy. So we went back to my apartment to play DDR. We had one more drink of her invention and I went to go get the DDR pads. I woke up the next morning face down on a DDR pad made sticky with my own drool. I noticed I was missing my shoes and my wallet.

I was also missing my heart. Even though it was a betrayal of sorts, being drugged and robbed in my own apartment, it was clear to me that I had met someone special. I wasn’t sure exactly how she was special, the drug she used was still clouding my thinking, but deep down I knew when I had regained my wits that I’d remember this night fondly. It’s been a few weeks now, and while I’m sure Annabelle’s moved onto bigger quarries, I like to think that she had the most fun playing me.

Tom Endo is a section editor who advocates button mashing through Virtua Fighter.