Do you have a few million dollars lying around? If you do, then Sex.com is a purchase you might want to consider. 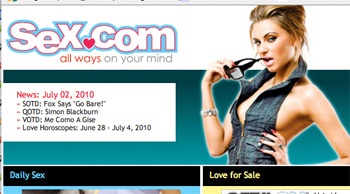 When you register or buy a domain name, it will typically run you less than $20. However, some “valuable” (read: high-traffic) domains will occasionally sell for much more. One of the highest-valued domains, Sex.com, has recently been put on the market and is expected to sell for several million dollars.

The sale is being brokered by SEDO, short for “Search Engine for Domain Offers.” According to Kathy Nielson, the company’s Director of Sales, a domain this profitable going up for sale is a rare opportunity for the right person.

“It is an extremely rare opportunity that a domain name of this caliber becomes available for sale,” Nielson said. “We are very pleased to be chosen as the exclusive brokerage firm to represent this domain sale. Short, descriptive domains are an amazing marketing vehicle. The sale of sex.com presents potential buyers with a once in a lifetime opportunity. The possibilities for this domain are endless and will enable the new owner to instantly define itself as a leader in its industry.”

The last time the Sex.com was sold, it reportedly fetched somewhere between $11 to $14 million (the most-often reported number is $12 million). This, of course, was after a lengthy lawsuit between Gary Kremen – the man who registered the domain – and
Stephen Cohen after Cohen fraudulently took control of the domain and used it to generate a huge amount of income for several years.

The domain is currently owned by Escom, LLC, which originally listed the site as part of a foreclosure sale. This was put on hold when Escom’s creditors filed an involuntary Chapter 11 bankruptcy petition against Escom in the United States Bankruptcy Court in order to prevent a possible loss of value by selling the name as a foreclosure auction.