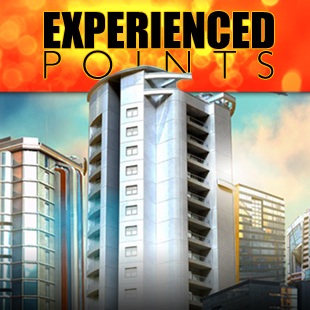 Cities: Skylines seems to be doing pretty well for itself. It’s broken the publisher’s sales records. It’s getting a really positive reception. Our own Jonathan Bolding gave the game a glowing review.

For reasons not worth talking about, it’s usually considered bad form to compare games in a review. If Shoot Guy V: Shoot More Bullets is a good game, it doesn’t seem fair to spend the entire review talking about (say) The Last of Us. But this isn’t a review and we can do what we like. So let’s pit Cities: Skylines directly against the most recent SimCity game and pretend the outcome isn’t going to be obvious.

Disclosure: At the time, I really didn’t see a need to pay $60 USD to play SimCity when everyone seemed to be saying the exact same things about it. So I was content to “enjoy” the game vicariously through friends and angry op-eds. I’m just going by the overwhelming public consensus on this game and not personal experience. For the purposes of this exercise, that’s plenty good enough.

So how do the games compare?

When we’re talking about the “sim” part of SimCity, it basically wasn’t. You might not have noticed if you gave up on the game early like so many people, but the rules that drove the game had more to do with the free-to-play mindset of “progression through participation” than with city simulation. It was possible to make a city that was entirely residential with no goods to buy, jobs to support people, or city services to sustain them. But since the simulation was programmed to mindlessly grow over time, the city would grow anyway until you had an entire city of unemployed people with no access to food or clothing, mysteriously living in massive high-rise buildings.

SimCity bragged that every inhabitant was simulated. But when players looked, they found the simulation was silly and shallow. A sim would leave their house in the morning and drive until they reached the first building with an available job. Then when it was time to go home they drove to the closest empty house.

But Cities: Skylines manages to deliver on the failed promises of SimCity. Every inhabitant has a specific name, a family, a place to live, and (one hopes) a job. They go to school, choose their education path, find a job, and eventually die of old age. You can zoom in and follow a single citizen through their routine. It’s a real simulation where people move in if the city is nice and they flee the city if you screw it up.

The pathfinding in SimCity was so primitive that it probably qualified as broken. Cars followed a brute-force “shortest path” logic that ignored everything about a route except for the distance traveled. Which meant that cars would rather travel to their destination on a gridlocked dirt road rather than an open four-lane highway if the dirt road was even a tiny bit shorter. In another game this sort of “my first pathfinding algorithm” might be tolerable, but in a game with such a focus on traffic management it’s unforgivable.

The traffic in Cities: Skylines is easily the deepest and most interesting car simulation I’ve seen in a videogame. It’s deep enough to create something we rarely get in games: Emergent puzzles. Yeah, you could solve this traffic snarl by just bulldozing the whole intersection and making all the roads fatter. But if you’re smart and observant you might be able to solve the problem by making an on-ramp just a little longer. Or change one of the streets to one-way. Or create a bypass.

Even better: All those vehicles have a purpose. They aren’t just randomly generated traffic. You can click on a vehicle and see what it’s delivering, and to where. If it belongs to an inhabitant, you can see who they are and what they’re up to. If you stop the deliveries from getting through, the city can and will fall apart in various ways. 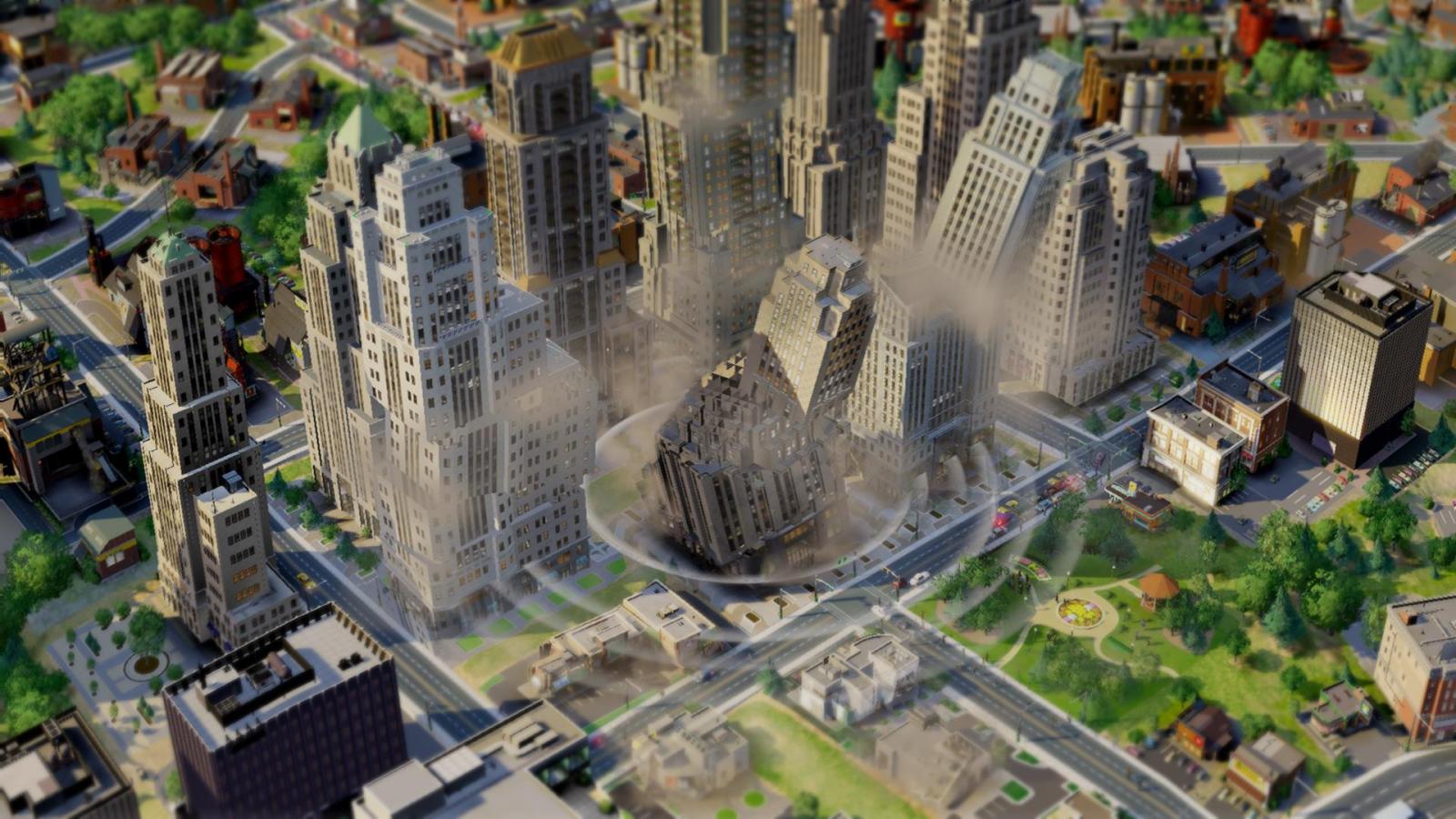 SimCity had a terrible online system that couldn’t handle the player load, locking most players out of the game for days on end or sticking them into hours-long queues. And when EA finally got their act together, it turned out that the multiplayer was shallow and stupid and lacking basic multiplayer features.

Cities: Skylines is designed to be a single-player experience.

So which is better? A game that packages broken DRM as a multiplayer “feature” that locks people out, or one that just focuses on building a stable and fun single-player experience? It turns out that no multiplayer is better than multiplayer that locks you out of the game. 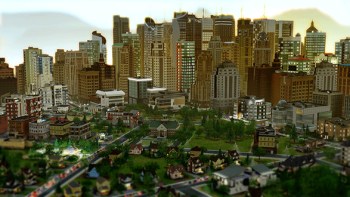 Instead, EA offered free “DLC” that was basically a cross between in-game advertising and a blatant cheat item. It was an electric car charging station that generated happiness and used no electricity. The best thing you could say in defense of it was that players weren’t forced to use it.

For contrast, Skylines has supported mods from day one. New buildings. New maps. Mods to give you new road-drawing tools. Mods to change the rendering style. Mods to change the gameplay. Mods to make the game easier, or harder. As of this writing there are over 18,000 mods on the workshop that you can download and activate with a single click. (And as I discovered yesterday, often without even needing to exit the game.) While some of them are no doubt trash, I’ve found a lot of stuff that’s just as good as the assets in the core game. And if you’re more of a do-it-yourself kind of person, the game comes with a handy level editor. Knock yourself out. 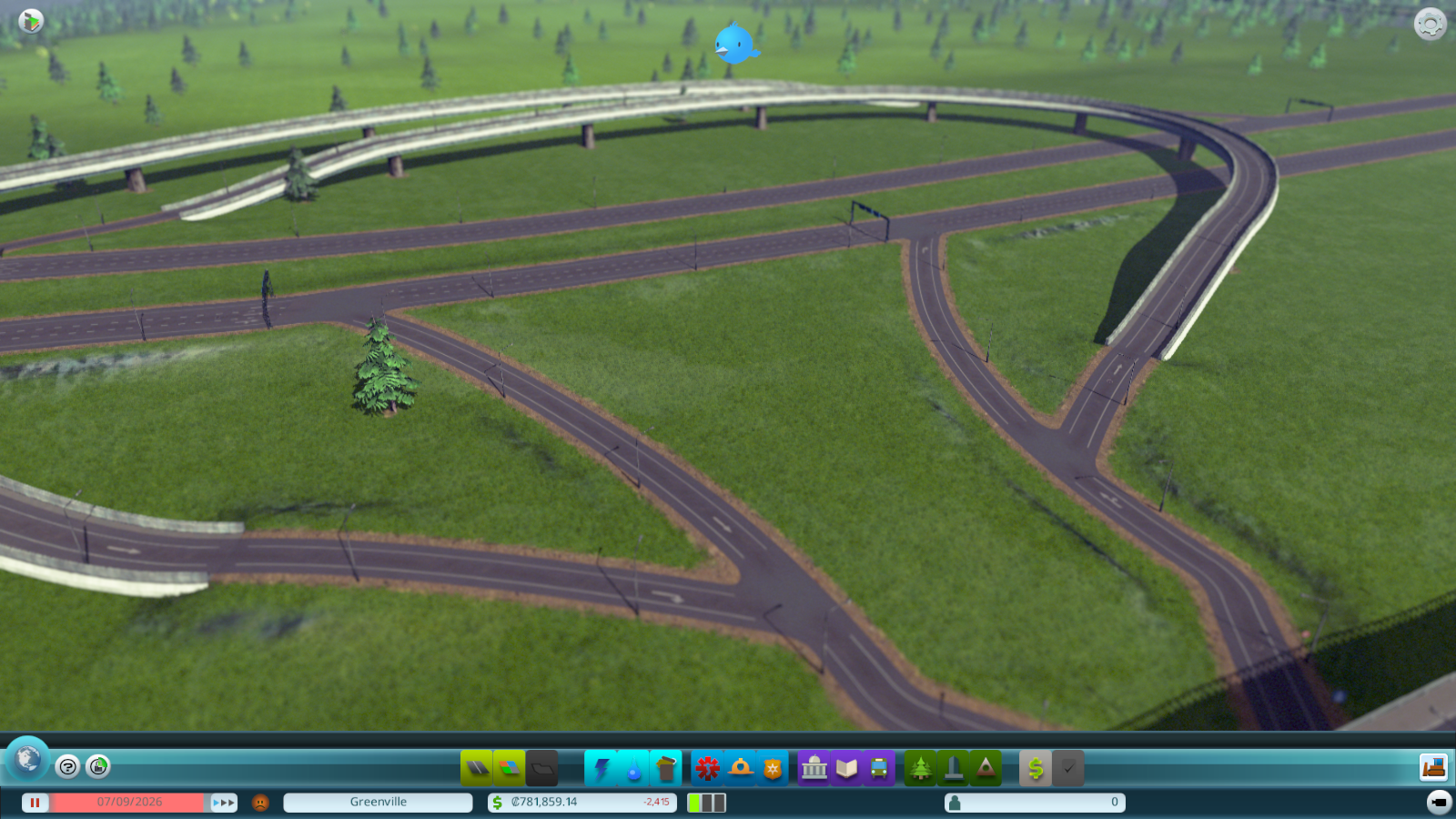 Cities: Skylines is the work of just 13 people. All it took was 13 enthusiastic people to overcome EA’s horrendous bungling and make a product that’s superior in every way. And apparently they did it in just two years.

If even one executive at EA had any clue about either their products or their customers, the SimCity 2013 we know would never have existed. If they had simply released the game we all wanted and expected, they would have avoided months of bad publicity. While I’m sure SimCity made money in the long run, think of how much more they would have made if EA hadn’t needed to pay for a massive server farm. How much money did they waste pushing the square peg of Maxis developers into the round hole of large-scale multiplayer? How much of a boost would it have been to Origin to have an exclusive game that the public actually wanted? What is the long-term cost of the damage to the SimCity brand?

Consider the fact that after driving this brand into the ground and pissing away a fortune in potential revenues, EA has closed the doors at Maxis, thereby punishing the peasants for the incompetence of the princes.

“They’re making money, so they must be doing something right!” I can never accept that excuse. A monkey could make money if given access to EA’s assets. That’s no excuse for gross mismanagement and wasted potential. If EA ever takes another crack at the city-building genre, they’re going to be coming at it from the position of the underdog. And they have only themselves to blame.