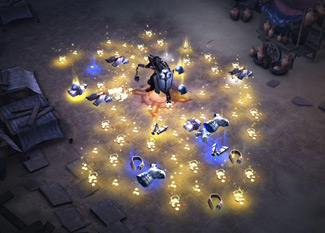 I think most people have heard of this concept by now, but just to make sure we’re all on the same page, here’s a short, non-technical, don’t-nitpick-this version:

The idea is that we respond very differently to predictable stimuli than to unpredictable stimuli. Your brain is basically a meat supercomputer. It’s always looking for patterns and trying to figure out how things work. And videogames are pretty good at keeping those parts of your brain busy by presenting you with lots of different patterns to analyze: Attack patterns, enemy movement patterns, patterns of audio cues, patterns of environmental cues, and so on.

When you experience some kind of success, your brain gives you a little squirt of dopamine. Dopamine is a big part of what makes it feel so good to master a game. (Lots of illegal drugs increase dopamine release, which is why they give so much pleasure.) Dopamine has a lot of purposes in the brain, but for this discussion we’re only concerned with how it impacts learning. It feels great to get that blast of dopamine when you finally beat the boss or solve the puzzle, but it’s also part of your brain’s way of guiding learning. You brain is training itself, “Whatever you just did to make this happen, remember it so you can do it again in the future.” Your brain is training itself to play the game.

An odd thing happens when this system interacts with random stimuli. If victory is random, the brain keeps doling out the dope, hoping to eventually find a pattern. This doesn’t just apply to videogames. Probably the most financially successful Skinner box ever invented is the unassuming slot machine.

Every time the slot machine pays out, the poor gambler gets another squirt of dopamine. It’s the dopamine, not the money, that the compulsive gambler is addicted to. Their brain is trying to get them to find the pattern that made this victory happen. Except, there is no pattern. You can’t master a slot machine. But our brains are designed to find patterns among seeming chaos, and the part of the brain in charge of dopamine delivery can’t tell the difference between “there is no pattern” and “I haven’t found the pattern yet”.

Calling a game with irregular rewards a “Skinner box” is like saying a trip to Olive Garden is “foraging for nutrients”.

A slot machine set to pay out exactly N dollars after X pulls would be utterly boring. Same goes for a videogame mechanic with predictable payouts. If you know that you needed to kill exactly 50 guys to get a rare weapon drop, then the wait will be tedious. But if the chance is (say) 1:200, then it’s much more alluring to those pattern-matching parts of your brain. Every kill has a certain suspense, because the drop might happen literally any moment now! A 1:200 chance is more interesting than “exactly 50”, even if the latter is more convenient and the former takes overall more time on average.

Not everyone is wired this way, of course. It varies from person to person how much dopamine you get, how you respond to it, and even what parts of the experience might trigger the delivery.

Aside: I’d seriously love to see a study of people playing Dark Souls to see if some people get most of their dopamine from the moment-to-moment successful dodges and strikes, while others get the larger rewards from major milestones like completing boss fights, acquiring weapons, or reaching new content. I don’t have anything to back this up, other than the fact that it would retroactively make every Dark Souls flame war make a lot more sense. The divide between Dark Souls fans and Dark Souls haters is so intense, and people cross lines so rarely, that I suspect there might be some physiology involved.

This is also why so many free-to-play games are so focused on shallow rewards. You accomplish something utterly mundane, and you’re treated to stimulus designed to make you feel like you just accomplished something. A musical sting! A positive message! A friendly cartoon face! A burst of fireworks! You are so awesome! The game designer probably doesn’t think of it in these terms, but what they’re doing is giving you a bunch of stimulus to hopefully get your brain to deliver a dose of dopamine. If it works, maybe you’ll fork over some money to keep the process going. It sounds creepy when put it that way, but remember that basically all entertainment is about stimulating various parts of your brain. If you follow this kind of reductionist thinking, you can reduce most entertainment to this crass idea of “money-for-stimulus”. 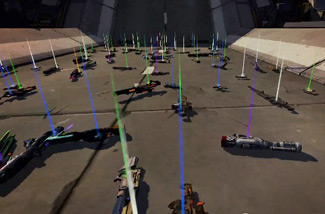 To be honest, I dislike blindly slapping the term “Skinner box” on systems like this. It’s kind of degrading to the player and undersells the depth and complexity of what’s going on in the game. A lab rat can’t become aware that it’s being manipulated or that a study is being performed. But a human being can be keenly aware of this sort of thing, which suggests all sorts of additional layers of subtlety. Calling a game with irregular rewards a “Skinner box” is like saying a trip to Olive Garden is “foraging for nutrients”. It’s technically true but also kind of obnoxiously reductive. Having said that, I don’t really have a better term in mind.

But no matter what we call it, it’s still something that lurks at the center of a lot of really popular videogames. I’d never say that Skinner-box game design is inherently bad, but there are a lot of places where it’s clearly abused, or used clumsily. Adding a Skinner box to a strong set of mechanics is fine. The Borderlands loot lottery is a Skinner box, but it’s built atop a set of solid shooting mechanics designed to deliver a visceral sense of empowerment. A lot of other games are simply a Skinner box with pretty art. The free-to-play market is full of stuff like this.

Like any other aspect of game design, Skinner boxes are neither good nor bad. It’s all about how the designer uses them within the overall game. Likewise, understanding how a Skinner box works (and why they work for some of us and not others) can help us understand why some games work and others don’t. And maybe it can even help us avoid falling prey to their trickery when paired with microtransactions.