It’s January, and your holiday gift giving event is over. If you’re anything like me, you generally walk away with a modest size pile of stuff of thoughtful and appreciated gifts, dark brown corduroy pants the likes of which you’ve never seen, and a pretty decent haul of games. People who call themselves “gamers” tend to wear gaming related T-shirts, read magazines and are often seen at family events discreetly playing with our DS, PSP or mobile phone. This self-identification is noticed by our families and during the holiday shopping period, they want to give you something that they think you’ll like. They know you’re a gamer, so they buy something game-related. Ultimately, you can end up with a pile of some of the most useless shovelware and peripherals on the planet. How can people you’ve known almost all of your life get you a game that’s so thoroughly dumb? In short, marketers, retailers and merchandisers know that during the holiday season, there are pressures on the shopper. We manipulate those pressures in order to make a sale… in essence, we’re the reason that you got eXtreme Trucking Adventure, for the PC.

Exploiting the Visual Clutter: What You See Isn’t What You Get

Product display has evolved significantly over the years. In the past, games have been grouped together with either the toys or electronics. Games were one of those weird things that weren’t big enough to get their own section in department stores, but because they were perceived as toys that weren’t exactly electronic equipment, they’d always shifted between those worlds. While this perception still holds faintly true today, you’re most likely to find games in the electronics section now, set apart from the TVs and cameras, but still there.

The most common display for the videogame is the “wall of games”. We’ve all seen this; the top games are placed behind glass in this grid formation, separated by platform. When marketing to gamers, we know that you, the purchaser and player, generally knows exactly what you want. While you may be deciding between the latest Call of Duty or Assassin’s Creed franchise, you’ve narrowed your search down to a manageable level. Consider the experience of your Aunt or Grandparent. They’ve decided to be the “cool” one this year and get you a videogame. They walk into this wall of games not knowing the differences between an Xbox 360, PS3, Wii, DS Lite, DSi, PSP, Kinect, Move or anything. It’s at this point that most people quit. They may not know what system you have; their recollection of your hardware is just a collection of damn numbers and letters to them.

If they happen to know that you own a particular platform, good for them. The wall of games is designed, actually intentionally, to overwhelm someone. The case stands much higher than the average person, but the top games are accessible. There are easily over fifty games to choose from, not including the bottom row of last quarter’s games. Humans evolved their visual recognition capacity to quickly identify threats and opportunities, and when there are no threats or clear opportunities (the game you want) humans tend to feel slight panic and view the overload of information as an obstacle. In this situation, the consumer feels that they need to make a choice. They know they want to get a game, they want to get a game that you want, the task at hand is to choose one and get it over with. More often than not, this choice is done through either brand recognition or package design. 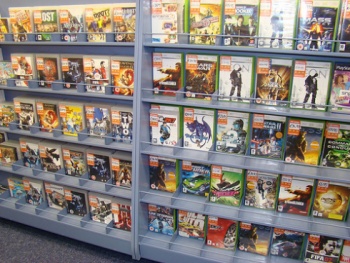 If your gift-giver knows that you like a particular series, maybe they saw you get Modern Warfare 2 last year, good for them! However, lacking that knowledge, it starts getting down to package design. There’s almost a predictable pattern that consumers go through to pick a game. Christmas is a time for peace, love and family – strike out Gears of War. People keep hearing about violent video games and how it turns church-going children into little Dahmers – strike out Call of Duty, God of War and Fallout. Once they start striking out different games that are unfamiliar, too violent or deal with non-Christmasy themes, you end up getting something familiar, like a movie-to-game adaptation of K-PAX.

Marketers know many people are buying a videogame for the first time during this season. We know that these game purchasers are not our core audience and we know that they’re highly motivated to buy something. We make decisions on package design that can straddle the balance on our core gaming audience and the non-gamer purchasers. For games rated Teen to Mature, we want the box art to be edgy, but not too much. We want to imply action with the colors, characters and position – not violence. However, we want to remain true to the context of our games. We regularly look at exactly where our box will be on shelves, and we look at the box design surrounded by other games. We understand purchasers will get overwhelmed quickly and make a purchase decision. Hopefully, they’ll not be too overwhelmed and buy a different game.

Ditching the Case & Finding the Videogames by the Register

Sometimes, the experience is overwhelming and confusing. There’s so much knowledge that you need to have now just to make an informed decision when buying a videogame. You need to know the platform, you need to know the ratings, and you need to know a little bit about the game itself. This pre-existing information is not readily available and unfortunately, during this season, the help from the staff is at best hurried and at worst rude. If your gift-giver has ditched the video game section, but remains determined to get you a video game, you’re pretty much screwed. Yet retailers, merchandisers, and marketers know there’s another place to get them to actually buy a new videogame for you.

I’d been into several retail stores this past season, even Big Lots, and I noticed many of them have the bargain bin of videogames near the cash register. With lots of Wii, PC & DS games available, they’re the shovelware adventure, puzzle and “edutainment” type games that are built for discount. These games are generally between $10 and $20. They represent a lower barrier to entry, they generally appear “safer” than the games in the cases and they’re still a game. With a range of games for all ages, your gift giver remembers that you have a laptop. They can buy you a PC game. Pushing aside the Dora the Explorer games, ignoring the ubiquitous Disney’s Cars games, they find the puzzle and brain training games and the themed racing games. Should they get a game where vampires race across the country at night? Should they get the game where the cartoon Einstein promises you’ll be smarter in just minutes a day? It’s pretty much a 50/50 shot at that point. Ten dollars later, that pressure that overwhelmed them at the videogame section in the department store has been turned into a pure endorphin rush. They’ve accomplished their task of buying you a video game that they’re reasonably sure you’ll like. 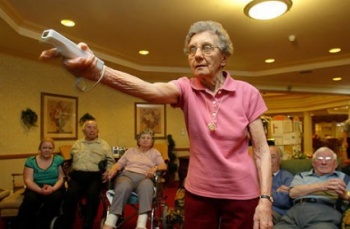 Unfortunately, you get a game that you’ll probably never play and if it’s a PC game, worth nothing in trade-in, even if your trade-in company takes PC games. Lastly, even if you return it, you get a piddly $10 back in store credit.

The Underlying Concepts in Getting Bad Games

I’m trying to get grandma off the hook here. She’s really not to blame. Marketing as it relates to retail is about balancing risk vs. reward inside the context of consumer pressures. Consumers feel pressure when making a videogame purchase in terms of price, location, availability, and prior knowledge. If the game is at its full retail price, the perception is that because it’s a higher price, the risk is much higher. Subjective aspects such as value, design and branding start weighing on their purchase decision. If they know that you really liked Mass Effect, the risk of getting you the next installment is much lower and the $60 price tag isn’t as daunting. However, when standing in front of the wall of games with no idea what’s “good” or what you like, that same investment seems like it can be too high to hurdle.

Because most videogame marketing is focused on the core gaming audience, most of that marketing is done at the time of launch. During the holiday season, it’s primarily up to the retailers to market videogames. While you’ll see some peripheral marketing done by game developers and publishers, it’s really all about retail. Retailers can only market the items they have with the marketing collateral, media, videos, and images that they’ve been given. Because retailers have so many other items they need to promote, there’s little to no modification of the videogame marketing material. With core gamers expecting games under the tree, the recipients of those games are at a disadvantage. When they buy games for us, people who don’t know games are still being targeted by the same marketing messages and media that have been designed for us. With this in mind, the primary pressure retailers have to push them to make a decision is the price. With games having such a low margin, there’s very little movement on that.

When you consider that there’s little movement on price, DLC is not a primary motivator for videogame gift-giving consideration, and there’s so many games being released, it’s easy to get confused, overwhelmed, and stressed out. The result of that stress is finding the lowest risk game that can satisfy the primary goal of buying a videogame. Seriously, it’s not your grandmother’s fault. The pressures that the videogame industry puts on retail, and the fact that retailers have a significant amount of power on the presentation and display, creates a near perfect storm that can befuddle a person with the best of intentions, driving them to purchase the worst possible game for you.