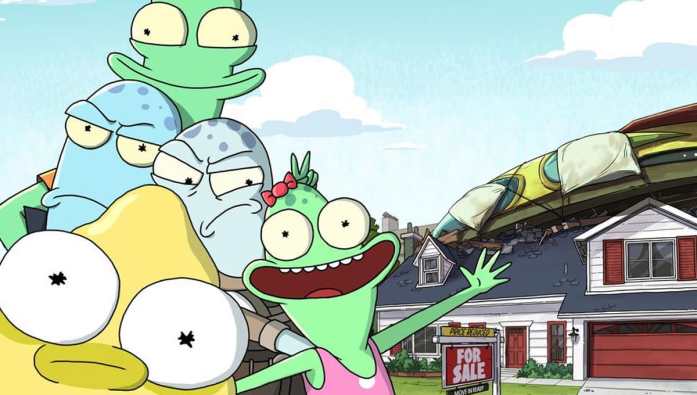 What happens when you get Rick and Morty co-creator Justin Roiland and that show’s former head writer, Mike McMahan, to make a show for you? You get a series that looks a lot like Rick and Morty but is called Solar Opposites, evidently. Hulu dropped the first trailer for the show (aside from an earlier teaser) today, and it reconfirms just how much this show feels like a Rick and Morty spin-off.

The show is about a team of four aliens who crash-land on Earth after their homeworld is destroyed. Korvo (Roiland) and Yumyulack (Sean Giambrone) hate their new planet, only seeing the bad sides of humanity, while Terry (Thomas Middleditch) and Jesse (Mary Mack) fall in love with our TV, sports, and pop culture. Whether they like Earth or not, their end goal is to protect a supercomputer called the Pupa that will one day terraform the entire earth… after eating them.

Yeah, this one is clearly weird. Interestingly, the trailer seems to want to associate the show with The Simpsons more than Rick and Morty. The show’s font is close to that of the long-running cartoon series, and the trailer’s use of it over a blue, cloud-filled sky is exactly like The Simpsons‘ iconic opening. The similarities can be seen, of course. We have a “family” living in suburban America and dealing with a host of issues; they’re just aliens instead of yellow-skinned humans.

Solar Opposites will land on Hulu on May 8.