My videogame collection goes all the way back to the early 90’s. It would go back even further, but a few years ago I was struck with a rare fit of cleanliness and tossed all of my floppy-disk based games. Most of the floppies had degraded to unreadable by then and it seemed pointless to keep them around. Now I regret doing that. If nothing else, I’d love to read over some of those old manuals.

Of the surviving games, about a fourth of them involve gameplay where you don’t play as anyone in particular. These are puzzle, strategy, or simulation games where there is no “main character,” and you’re just playing as some abstract guiding intelligence. Then there are 22 games where you can choose to play as either male or female. Of the remaining 75 titles where you play a fixed character:

The six games I own with female leads are Portal (Chell), The Longest Journey (April), Beyond Good & Evil (Jade), American McGee’s Alice (Alice), Silent Hill 3 (Heather), and Heavy Metal FAKK 2 (Julie). The only thing I can say in my defense on the last one is that it was in the bargain bin. I’m sure I’ve missed some female-lead games, but I’ve missed plenty of male-lead games as well, and I’ll bet the male / female breakdown of my collection isn’t too different from the industry at large. (Yeah, I don’t have Lara Croft or Samus Aran in my collection, but I also don’t have any Mario, Solid Snake, Fox McCloud, Sam Fisher, Sonic, Kratos, or Link. Call it a wash.)

And before anyone asks – yes, we’re going to completely ignore the genre of Japanese games where you either play as women or rapists.

A ratio of 11 male leads for every female lead is pretty abysmal, and probably a lot worse than the actual mix of male to female gamers. Sometimes I try to picture what things would look like if the ratio was flipped and character-driven games were relentlessly about women, with a male-only game coming along once every few years and being hailed as a ground-breaking idea or a novelty. I think that I would find it odd. Would I play fewer games? Probably not. I’d just play different games. Maybe I’d steer clear of those endless action games where you play as a sassy ass-kicking femme fatale who saves the world so she can make kissy faces with her trusty sidekick Captain Beefcake. Maybe I’d stick to the ego-less world of strategy and simulation games. In any case, it would certainly feel like most games weren’t made for me.

I just got done playing Overlord 2, a game where you collect a number of increasingly trashy mistresses as you progress through the story. If it were flipped, it would be a game about a woman who assembles a man-harem of fawning guys with square jaws, oiled abs, and no dignity. Call me a rampaging homophobe, but that “reward” would probably de-motivate me more than anything else. One way or another, this game is going to drive some of the potential audience away, not because of gameplay but because the context in which the gameplay takes place is simply tuned to a single gender. I know there are women giving this game a pass, and I don’t blame them.

The standard practice in both movies and games is to have a male lead with a female love interest character. The game just tells one story:

But this is videogames we’re talking about. This is a world where anything is possible. Can’t we just add an option to play as a female?

One of those floppy games I tossed was the 1994 adventure game Ecstatica, where you play as a wandering male adventurer who stumbles into a demon-infested town to purge the land and ride off with the beautiful young sorceress in the end. But! You could also choose to play as a female… who rides off with the beautiful young sorceress in the end. Whoops. It came off not as an edgy game tackling lesbian issues, but as simple laziness on the part of the developers. So if we’re going to add female lead characters we probably need to change the gender or identity of the supporting cast. Maybe the romance character will change gender along with the player, or maybe (as with the BioWare games) there will be a fixed cast and changing your gender will simply change your romantic options within the group. 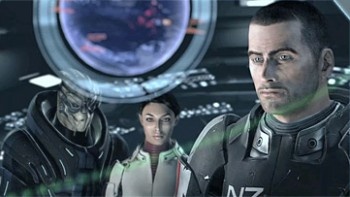 So now the game is telling two stories:

But what about gays? What about the guy who wants to play as a male, but he wants his avatar to hook up with the character normally intended for the female lead? It seems odd to offer all this gender choice and then simply restrict who the main character can romance. Well, if we’re going to do that for gay men we’d better do so for gay women. Now things are getting complex:

Now we need four times the dialog and voice acting we needed before. The game is letting us shape the gender and sexuality of our character, but it still hasn’t given us any options with regard to race. I know I’m not the only one who was disappointed in Mass Effect to find my Samuel L. Jackson version of Commander Shepard ended up sounding more like game show host Chuck Woolery. The vocal disconnect was a betrayal of the character I was trying to create. Couldn’t they just have given me an option to choose my voice? Well…

This is starting to get crazy expensive, and even if we go to these lengths to offer players choice we’re still likely to end up with some cantankerous Brit pointing out that they’re pretty much sick of playing characters with a mid-western American accent. Didn’t the British ever make it into space? Why don’t aliens ever invade Canada? Don’t Australians ever have trouble with zombies?

You’ll notice that every option we add has the side-effect of doubling our dialog and voice requirement, not to mention the increased complexity for the coders and scripters who have to make these options work. Then there is the challenge of fully playtesting a game with so many possible permutations. We started out just trying to offer a very reasonable option for female gamers, and now we’ve blown our budget eight times over and we still haven’t solved the problem. Expanding the storytelling aspects of your game is good, but once you start it’s hard to know where to stop. And no matter where you draw the line, someone is going to feel disappointed or left out. Even if you somehow manage to make a game where you can pick either gender, any race, any accent, and any orientation, you’ll still get complaints from players who want to have romantic encounters that involve more than just two people. This is a hole with no bottom.

It’s interesting that some developers (mostly BioWare) are exploring this idea now, when it was a lot more feasible to do so before the arrival of 3D and voice acting. Back when games were 2D sprites and text, it would have been very easy to let us make all kinds of wild choices about race, gender, and sexuality. But for the most part nobody bothered. Now developers are dabbling with the idea, but at the current technology level that means pouring potentially millions into voice acting, motion-capture, and character models.

I’m not saying all this to defend the way some games have often pretended that female gamers simply don’t exist, but just to point out that this sort of thing is annoyingly hard and expensive. Does this sort of thing keep the ladies from playing? Do females stay away because games are made for men, or are games made for men because females stay away? The debate over this question has been raging since the first time a guy made a videogame and the first gamer lamented that neither of them knew any chicks, but I’m sure we’ll be able to sort it out in the comments.

Shamus Young is the guy behind this movie, this website, this book, these two webcomics, and this program. He actually did go through KOTOR as a female and made kissy faces with Carth Onasi. Make of that what you will.