Spacelords (or the game formerly known as Raiders of the Broken Planet) is easily the most uncharacteristic entry in developer Mercury Steam’s output. It’s a third-person co-op shooter game that’s equally a brawler, tied together with an anime twist on Borderlands’ aesthetics. All told, the title is impressively polished for a free-to-play game. Despite its talented pedigree though, Spacelords’ launch was anything but a guaranteed success.

As Raiders of the Broken Planet, the game was a semi-free-to-play experience where, after the initial free missions, you could pay for sets of campaign missions. It was an interesting attempt at episodic content and monetization, but it ended up nearly killing the game. To play everything, it cost close to full retail price, but matchmaking was split across those who owned specific campaign packs. Not aiding matters was a lackluster introduction to a litany of systems you needed to understand to play it properly, along with a starting mission that’s one of the game’s weakest scenarios.

After several attempts to turn things around, Mercury Steam finally opted for a relaunch that boldly just throws up its hands at what every games-as-a-service title offers. Instead of grinding for loot, you earn crafting materials and experience just by running dailies, and you can invest each into precisely the guns and skills you want. No lootbox shenanigans. Instead, the incentive is to build new versions as you level up, able to further max out your loadout so you can go forth and kick ass.

There also isn’t a bland overworld of copy-pasted enemies to face, but handcrafted missions like out of Syndicate or Left 4 Dead. Better yet, rather than pay for new missions or heroes, it’s exceptionally easy to earn credits for new heroes, while additional missions unlock every few levels. Each scenario throws half a dozen new wrinkles at you, from laser-spewing crystals sending you rolling in boss fights and NPC factions duking it out in the middle of your operation to ancient demons teleporting you to another dimension to tussle with you one on one. It’s remarkable that each level has multiple routes and potential strategies given how much each is structured like a linear set piece.

Further bucking trends, player-versus-player is meshed into story missions, allowing for one Antagonist player to join in. Killing them is worth extra points, but if they foil you, they get all the glory. All these elements ensure each mission feels like its own replayable game type thanks to the diverse offerings. Everything from fighting a foul mouthed wannabe Cthulhu to darting around shifting ruins out of Tomb Raider is on offer, made all the more memorable with jokes and snark for every hero.

That sharp, crass wit also guides the new tutorial system, walking you through step by step with characters breaking the fourth wall in menus and explaining game-y elements like AI partners through hilarious means. In the latter case — your crew’s pilot happens to have triplets named Huey, Dewey, and Louie. The tongue-firmly-in-cheek humor blends perfectly with the gritty weird-western story to present something that’s never too over the top or too serious. There’s a world with curious lore to dig into if you’re willing, but it can just as well be your gonzo shooting gallery. 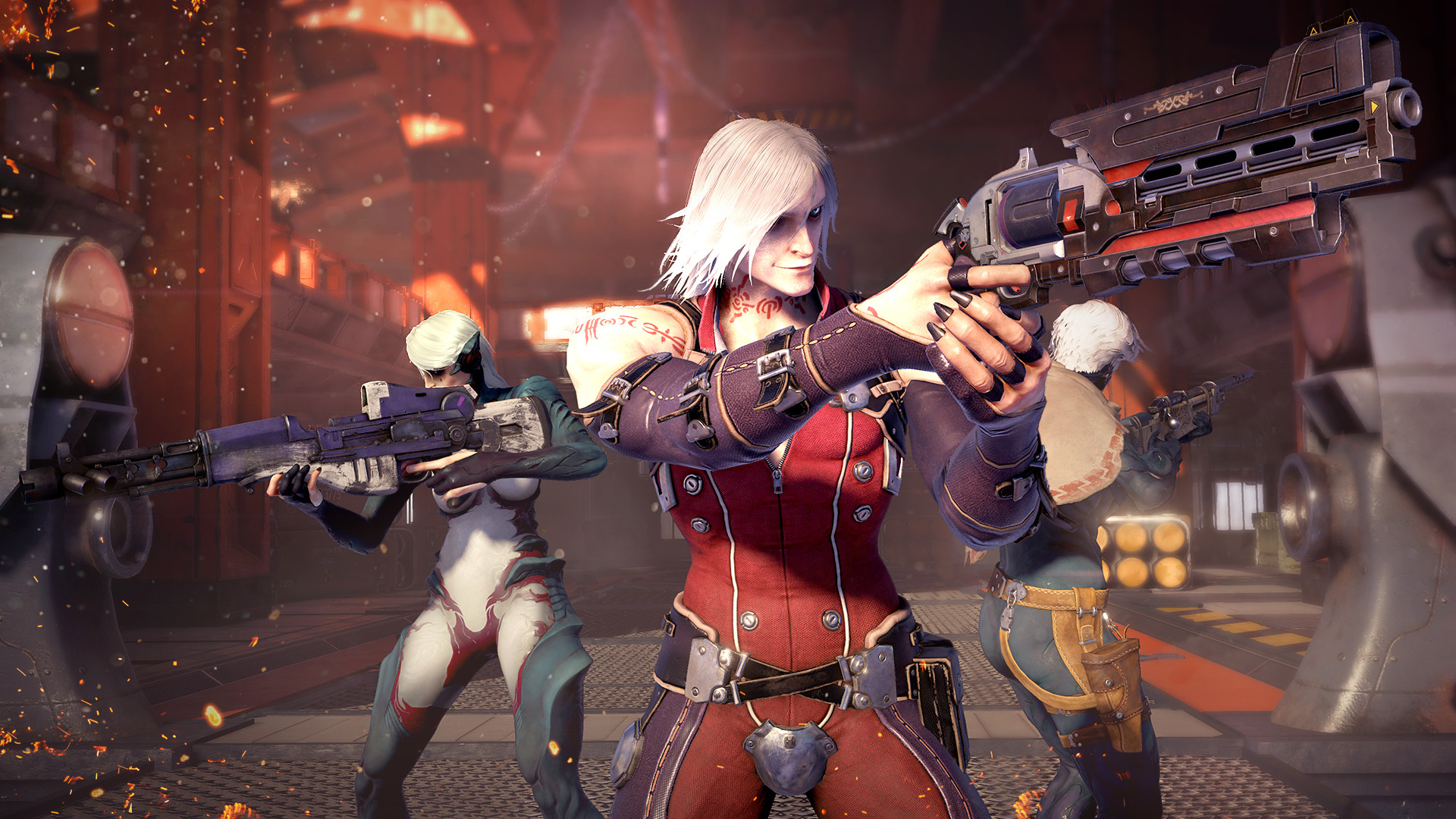 Speaking of which, one of the other major improvements over Spacelords’ original launch is a vastly faster paced, refreshing combat system. Rather than a standard cover shooter, the emphasis is on managing enemy mobs and staying mobile. Your fists are as valuable as your gun, dealing out a mixture of punches, grapples, and dodges to triumph over your enemies with icons nudging you to counter correctly. It’s not For Honor, but you can’t name many third-person shooters with this much thought put into their melee combat.

Diverging still, instead of grenades or power meters, you obtain the caustic energy Aleph from taking down elite enemies and grabbing it from spawns across the environment. Aleph also is often critical to mission objectives, and if you die, your opposing Elites and Antagonist players can pick up your energy for themselves, complicating matters considerably. As such, players never sit in one place longer than necessary, leading to one hell of a ride that hearkens to the more intense play styles of Mass Effect 3’s multiplayer.

Such an active combat system demands a different style of playable character than we often see in these sorts of games. Thankfully each hero plays wildly differently, supporting a wide set of possibilities. Fancy going on the offense? Become a wall-jumping shotgunner as Alicia, floating through the air like a Matrix character in slow motion before curb-stomping fools. Want to play support? How about Valeria with her mechanized arm blades and healing auras? Not great at brawling? Konstantin’s minigun melts everything, and his shield’s a life saver in a pinch. You’ve also got a sniper whose guns aim for her, a crazy old man with a jetpack, and a walking insect hive disguised as a near-human entity, just to name a few.

Where many games-as-a-service titles aim for the largest player base possible, Spacelords is doing fine with its niche audience. I saw active clan groups playing together, there are monthly updates from the developers with new content, a staggering amount of fan art — nothing that screams the game is a massive success, but it’s alive despite everything. Despite skepticism thrown its way, there’s a tight, devoted fanbase that’s found something great within Spacelords.

Spacelords is a weird game. The dialogue swear count rivals the bullets flying on screen. The gameplay never compromises into a convenient box. The art direction is somehow both gorgeous and hideous in just the right way, with characters equally alien yet identifiable. Every inch is unapologetically unique. Spacelords is the sort of game we’re told can’t exist in the AAA space anymore, yet it’s making it work. Much like Rainbow Six Siege, For Honor, and Warframe before it, there’s every reason for Spacelords to fulfill a niche mainstream games just aren’t. It might be as rough around the edges as its heroes, but that’s just part of Spacelords’ charm.