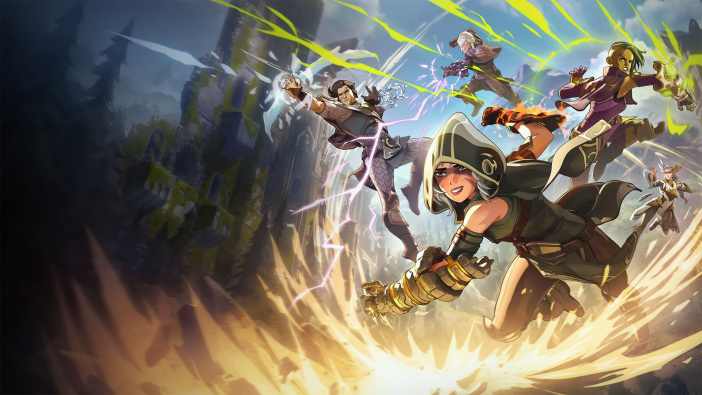 When Apex Legends released last year, my friends and I were overjoyed. Here was a battle royale we could get into. Crisp shooting with lots of guns, fun characters with unique powers, and a helpful ping system left us hungry to jump into this explosive multiplayer genre.

Then we died. A lot. And died some more. Meeting an enemy team was near-instant death, every time.

At the risk of further humiliation and demoralizing evenings, we ultimately shelved Apex Legends. I continued to watch the genre from afar, my hands pressed against the glass of the battle royale sweet shop, not daring to venture inside. Until Spellbreak appeared in the window.

Spellbreak, developed by indie studio Proletariat and recently released as free to play on Nintendo Switch, PlayStation 4, Xbox One, and the Epic Games Store, doesn’t shy away from checking all the boxes of the battle royale genre: drop down on a giant island, scavenge for loot, and survive as the last person (or team) standing amidst an ever-shrinking circle.

Thanks to its magic-powered third-person combat, fun range of movement, and relatively low player count, Spellbreak is a welcoming, player-friendly battle royale, even for the worst of us. 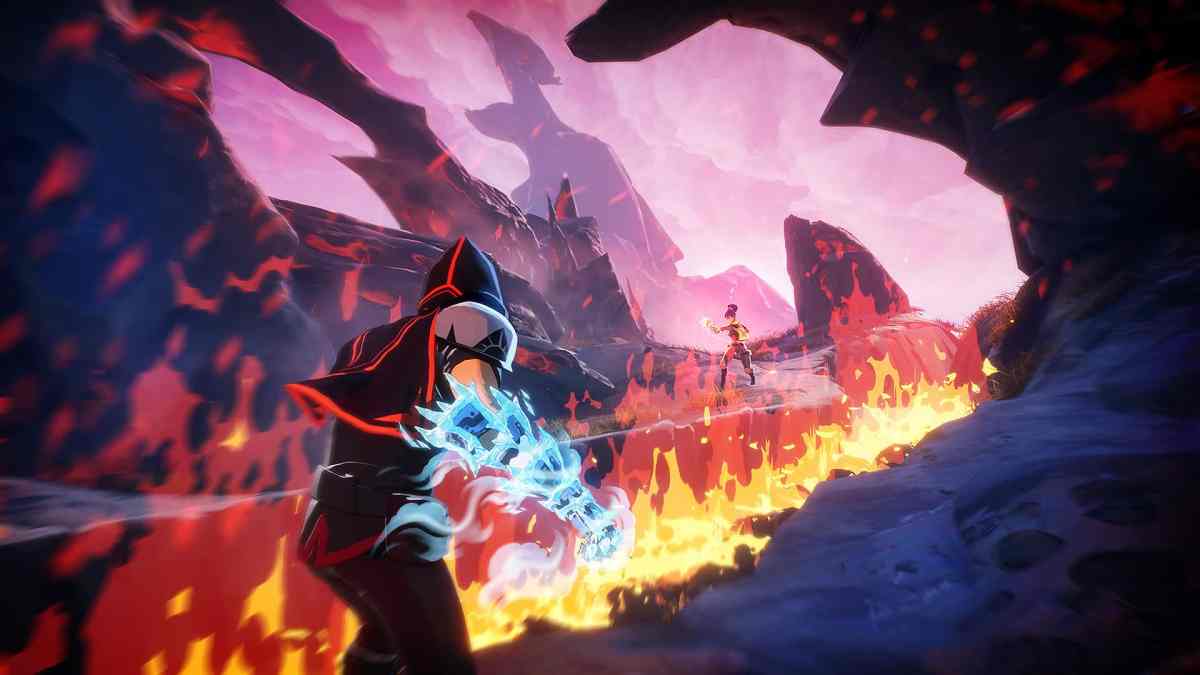 I won my very first Solos match of Spellbreak, feeling ridiculously overconfident with my poison spells until I realized the first match is full of brain-dead bots. “The first couple of matches are populated with bots,” confirmed Seth Sivak, CEO of Proletariat. “Due to the unique nature of the combat, these initial matches are set up to help ease players into the gameplay.”

Spellbreak‘s mages trade guns for spells. In place of characters, players choose one of six elemental gauntlets, like Stoneshaper, Frostborn, or Toxicologist. Each class includes a set of leveled talents that are automatically applied when reaching a new shrinking circle, creating specialized play styles. The Frostborn’s ice bow leaves a trail of ice they can skate on, while the Tempest’s wind powers make them stronger in the air.

Things get more challenging after the initial bot-loaded matches give way to real human players. Sometimes my team is wiped out within a minute of dropping into a hotly contested drop zone; other times we’re able to successfully reach the top 3 by efficiently gathering equipment upgrades and carefully choosing routes and targets before chaos ensues. Once a friend and I were able to reach first place in Duos, which was unheard of in our Apex Legends days. 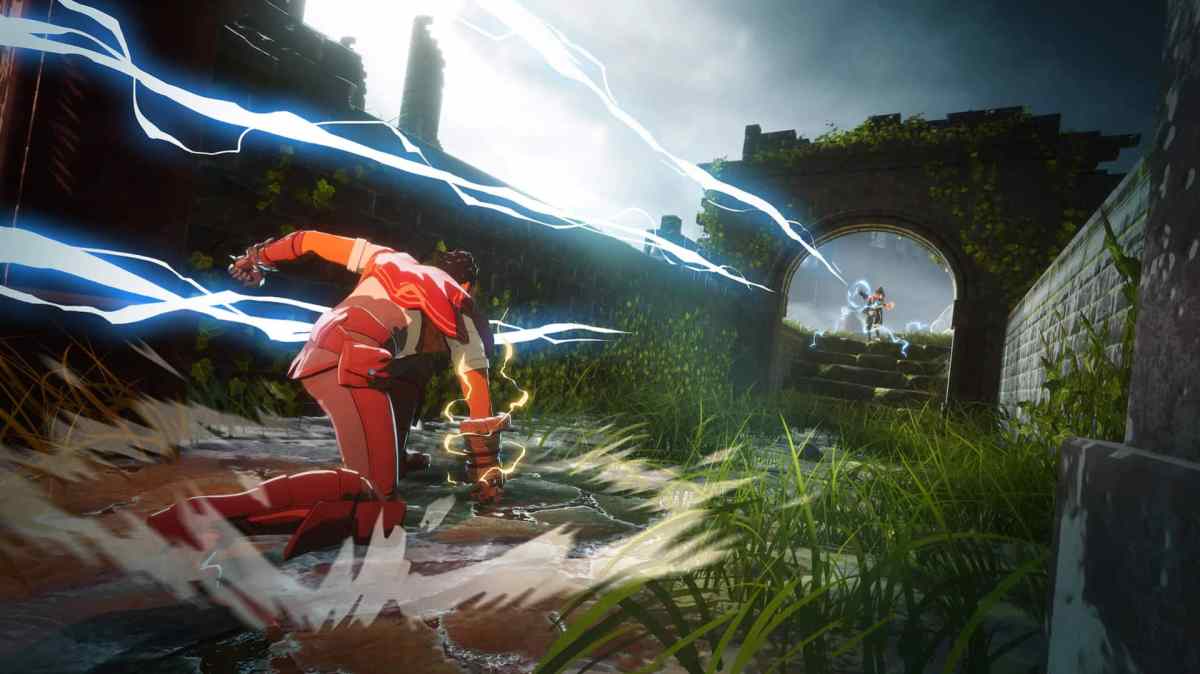 After reaching Mage Rank 10 we’re still finding some bots in matches, easily identifiable due to their defiant unwillingness to dodge incoming attacks “The number of bots in matches is scaled down based on the players’ Mage Rank,” said Sivak. Bots are used to fill empty slots during matchmaking. It’s easy to see in the practice lobby screen, when our pool of 30-35 players begins a match with the full 42-wizard roster.

The smaller player count also makes Spellbreak an easier battle royale to jump into. “Having fewer players means matches move quickly,” said Sivak. “We wanted to keep the map tight and since players can’t really hide or spend much time inside buildings, it means having more players could be overwhelming.”

The map is still relatively large — not nearly the size of in PUBG or Apex but more than big enough for a few dozen mages to fly around. Regardless of your class, everyone is capable of gliding over short distances, opening up the sky as a battlefield with flying boulders and meteoric fireballs. Equippable runes grant even more movement powers like flight, teleportation, and invisibility.

The incredible freedom of movement also means it’s possible to disengage from a bad fight. In several situations I was jumped unaware, which would’ve spelled an embarrassing game over (or anxious whimpering to my teammates) in other games. But in Spellbreak I have lots of exotic tools at my disposal, like disappearing with Shadow Step or Teleportation, or using Flight to blast off like a rocket, escaping around a castle wall to drink a health potion and scream obscenities into my mic. 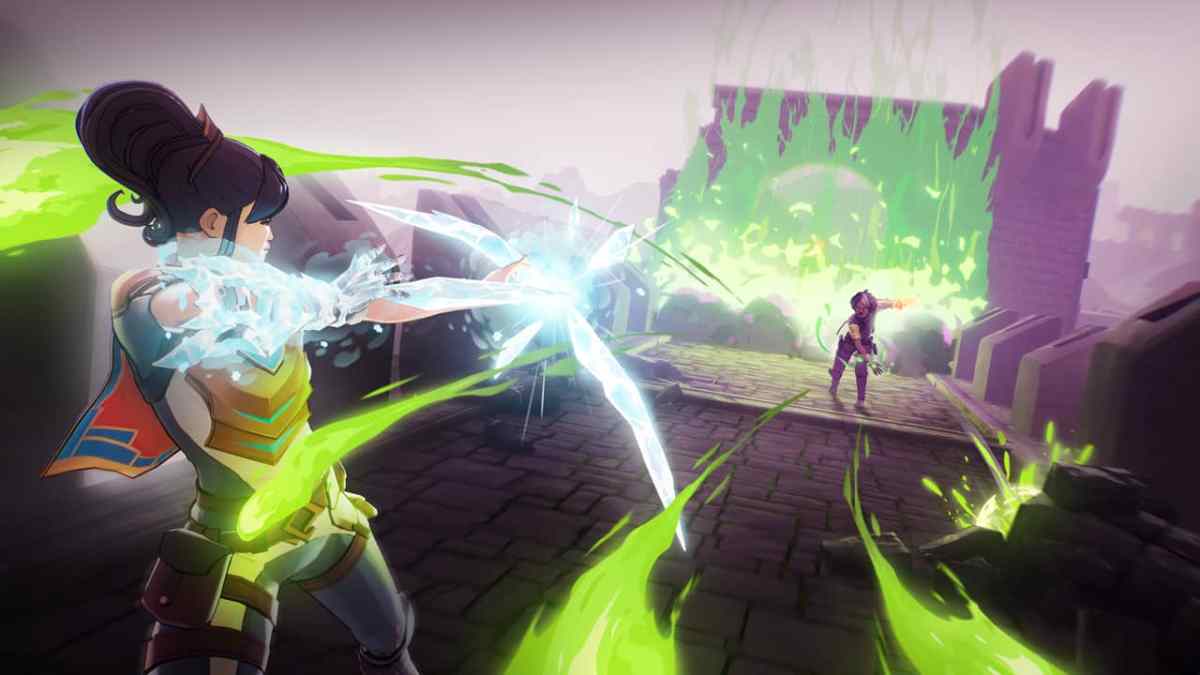 If a teammate does go down, they’re reduced to a glowing energy ball. They can move, slowly, in the hopes that an ally will revive them. The four-second revival is an eternity in the middle of a fight, but a smart team can play defensively and reposition to save a downed ally. On the flipside, catching an enemy ball allows me to permanently exile them from the match, shuffling the downed wizard off to spectator heaven.

Spellbreak‘s biggest weakness lies not with its gameplay, but with its free-to-play progression, or lack thereof. I never thought I’d miss opening loot boxes full of stickers and emotes that I’ll never use, but Spellbreak lacks even that, instead doling out tiny amounts of currency along with a rotating cosmetics shop, with mostly boring, overpriced costumes straight out of a Renaissance fair. I’m looking forward to the first set of major content updates, including story content and a traditional team deathmatch mode, but for now the progression feels more like early access rather than a full launch.

After nearly 10 hours with Spellbreak, my friends and I are still routinely humiliated and embarrassed, with some matches lasting a mere two minutes as we bemoan a chaotic drop zone. Yet there are those magic scenarios when everything’s clicking, luck is on our side, we get the drop on an unsuspecting enemy, and we survive till the bitter end. Those magic moments give us a glimmer of hope that we’ve finally found a battle royale we can enjoy.