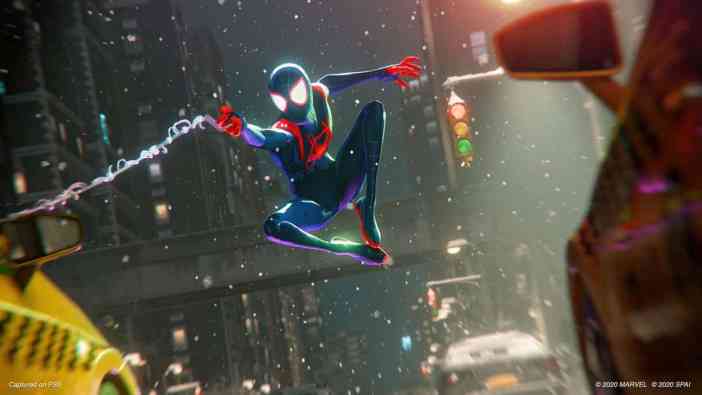 As many had hoped, Marvel’s Spider-Man: Miles Morales is getting a video game version of the Spider-Man: Into the Spider-Verse suit. Insomniac Games revealed the outfit with a stylish new trailer that highlights some of the visual differences it offers. Other than presenting the design made famous by the 2018 animated film, this version of Miles’ suit also features the same low-frame rate movement from the movie. If the purposely choppy animations are a little too distracting though, Insomniac Community Director James Stevenson confirmed that the feature can be turned off. You can watch the suit in action in the PlayStation 5 footage below.

The costumes will be made available upon release to those who preorder Marvel’s Spider-Man: Miles Morales, but the suit can be unlocked in-game as well, meaning you won’t be missing out if you decide to pick up the game at a later date. Still, if you’re wanting to use the Spider-Man: Into the Spider-Verse outfit from the moment the game begins, preordering is the way to go.

We only have to wait a couple more weeks to get Marvel’s Spider-Man: Miles Morales and PlayStation 5 in our hands. A few months after Insomniac’s follow-up was revealed, fans were treated to an extended gameplay presentation, showing off some of the game’s combat. The studio has also revealed that Peter Parker in Marvel’s Spider-Man Remastered will have a different face from the one we saw in the 2018 original.