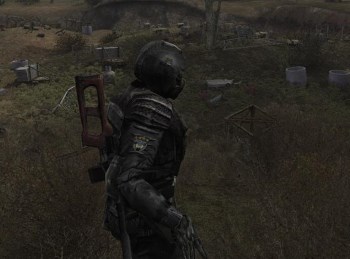 The makers of STALKER: Lost Alpha say a leak of an unfinished version of the extensive mod has scuttled any chance of it being released as an official sequel.

STALKER: Shadow of Chernobyl was a fantastic open-world shooter, but even so it fell well short of the ambitious goals detailed in the 2001 reveal. Those shortcomings are what the STALKER: Lost Alpha mod is intended to address, as it seeks to restore the game to its original, pre-2005 state and give it a much-needed visual overhaul as well.

Even more tantalizing for fans of the series, there was talk – entirely unsubstantiated, but talk – that Lost Alpha could actually be released as an official STALKER product. The franchise is effectively dead in the water thanks to the collapse of STALKER 2 and the subsequent dissolution of developer GSC Game World, so the possibility of a “new” release, even if it’s based on an old version of the game, is a very exciting prospect. Sadly, it now appears that won’t happen.

“Some testers have decided to ruin years of our hard work and have leaked an unfinished render-test build of Lost Alpha to the public,” developer Dezowave wrote in an update on ModDB. “This leaked version is not finished and not prepared to be released by any means. It contains render bugs that we’ve been working on since last year among the other ones that prevent smooth gameplay.”

“This unfortunate event crosses out any chances to release LA as an official addon to STALKER series,” it added.

The good news is that the most recent version of Lost Alpha will be turned loose on the public on April 26, the 28th anniversary of the Chernobyl nuclear power plant disaster. “It won’t be completely finished as we wanted it to be but at least stable and finishing the game would be possible,” the developers wrote. “This can be called ‘early access,’ which means patches, updates will be added in the future.”

An anonymous source said there’s still a “very small chance” that Lost Alpha could see a commercial release in some form, but putting it out as a free mod, even in an incomplete state, would seem to suggest rather strongly that it’s not going to happen. On the other hand, both Dear Esther and The Stanley Parable began life as free Source engine mods before going on to commercial success as stand-alone releases, so anything is possible. Either way, and in spite of the promise of future updates, Dezowave said that it is preparing to move on to a new project, which it will reveal later this year.