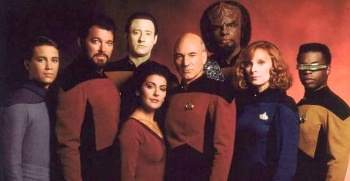 Seth McFarlane makes it so as the crew of Enterprise-D attends an animated convention in a special episode of Fox’s raunchy cartoon.

Having already conquered the world of Star Wars with its Blue Harvest special, Seth McFarlane and the crew behind Family Guy have set their sights on the opposite end of the nerd spectrum, the final frontier better known as Star Trek. Seeing as how the folks behind Futurama already brought in the (living) cast of the original series, I supposed they figured that they may as well go one better while they’re at it (that’s right) and go with the cast of The Next Generation.

“Stewie blows a fuse when he doesn’t get a chance to ask his favorite ‘Star Trek: The Next Generation’ cast members any questions,” reads the episode summary. “He devises a plan, builds a transporter and beams the entire cast to his bedroom so they can spend a fun-filled day together in Quahog.”

Word of this animated reunion originally broke earlier this month in an interview with Johnathan Frakes, best known as Picard’s number one, William T. Riker. Can McFarlane and co. produce an animated TNG offering of equal or greater comedic value than The Critic’s Hee-Haw: The Next Generation? Tune in this March to find out.