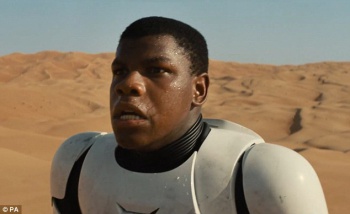 Rumored Star Wars Lead John Boyega (the black guy in the Stormtrooper armor from the trailer) lays the smackdown on criticism of his character.

So that Star Wars Episode VII trailer was pretty great, even though it only gave us a few tiny glimpses of what was to come. One of those glimpses was a shot of John Boyega, who is rumored to actually be the lead of the film, in Stormtrooper armor looking quite worried. Boyega’s appearance was met with praise by some, and criticism from others. The actor had the following to say regarding this on his Instagram account:

“Thank you for all the love and support! The fan mail and fan art has added to my joy! Isn’t it crazy that Star Wars is actually happening? I’m in the movie but as a Star Wars fan I am very excited. To whom it may concern… Get used to it. :)”

Critics of Boyega base their argument on the fact that the Empire is meant to be an analogy for Hitler, the Nazis, and the “Master Race,” and thus having a black actor portray a Stormtrooper undermines that analogy.

However, I believe it’s way too early to be jumping to such conclusions. We have no idea what kind of role Boyega will be playing in the film. Considering that he is rumored to be the lead, it’s highly probable that he is simply disguising himself in Stormtrooper armor, ala Luke Skywalker and Han Solo in the Original Trilogy.

Furthermore, as much as it pains me to recall scenes from the Prequels, since Stormtroopers are originally clones of Jango Fett, who is a Maori, the “white people master race” analogy from the Original Trilogy has already been undermined.

What do you think of Boyega’s appearance in the trailer?