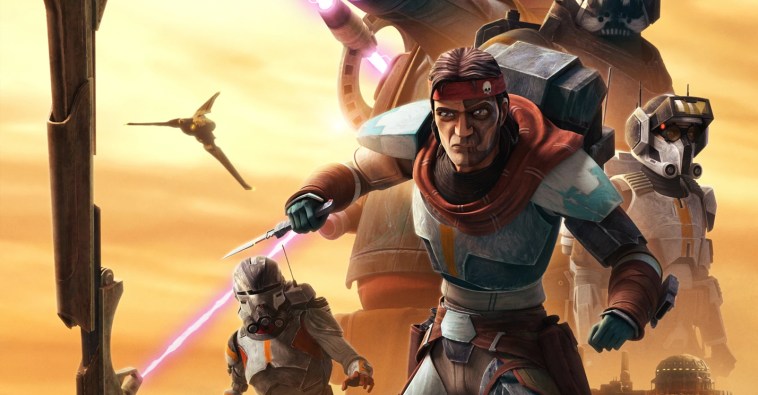 This discussion and review contains very light spoilers for the first 14 episodes of season 2 of Star Wars: The Bad Batch, streaming on Disney+.

One of the central appeals of The Clone Wars was the show’s anthology nature. Sure, The Clone Wars had credited lead characters like Anakin Skywalker (Matt Lanter), Obi-Wan Kenobi (James Arnold Taylor), and Ahsoka Tano (Ashley Eckstein), but the series was structured in such a way that it could follow any number of threads within the larger framework of the eponymous conflict. The stories didn’t even follow one another chronologically, instead jumping across the timeline.

To be fair, the results were of variable quality. It is quite common for viewers jumping into The Clone Wars to receive lists of recommended episodes and arcs, often inviting them to watch particular stories outside of the broadcast order. Still, the template was commendably flexible. The Clone Wars was a framework that could stretch to include a deep dive into the Force in the “Mortis” arc, a meditation on the horrors of war in the “Umbara” arc, and something as goofy as the “Droids” arc.

By design, The Bad Batch strips out this anthology structure. As the title implies, the show is built around an established ensemble, with the episodes providing a linear progression of the squad’s adventures through the cosmos. This serves to immediately and effectively differentiate The Bad Batch from The Clone Wars, ensuring that the animated spinoff operates according to a different set of rules than its parent show. There is a tighter focus and a much narrower storytelling range.

Season 2 of The Bad Batch picks up in the wake of the first season finale, in the wake of Vice Admiral Rampart’s (Noshir Dalal) genocidal bombardment of Kamino. The eponymous team is on the run from the authorities, trying to survive in a hostile universe. While there are recurring plot threads and a mounting mass of continuity, The Bad Batch is structured as a largely episodic television show, with each installment offering a distinct adventure for the group.

In its own weird way, The Bad Batch feels like a throwback to the classic television shows of the 1970s and 1980s — weekly genre shows like Kung-Fu, The Incredible Hulk, or The A-Team. While the content and even genre of individual episodes might shift, most of the stories follow a familiar template. The mercenary team is assigned a mission by either Cid (Rhea Perlman) or Phee (Wanda Sykes), which throws them into a familiar genre pastiche.

It is a structure similar to that of The Mandalorian. There are points where those echoes are very pronounced. For example, the season’s ninth episode, “The Crossing,” finds the heroes tasked with transporting a volatile mineral across a dangerous planet surface, much like in “The Believer.” To be fair to The Bad Batch, the series is careful to avoid direct imitation, and “The Crossing” is less overt in its homages to The Wages of Fear and Sorcerer than “The Believer.” Still, it feels familiar.

To a certain extent, this seems like the point. The Bad Batch is clearly built around the interests of its creative team, which obviously includes those aforementioned “wandering heroes” shows. The Bad Batch is packed to the brim with affectionate riffs on pulpy genres. The fourth episode, “Faster,” finds the team entering the seedy world of pod racing. The fifth episode, “Entombed,” has the squad embarking on a treasure hunt. It’s all fairly standard and unremarkable stuff, none of it particularly compelling.

That said, even when it feels derivative, The Bad Batch is a technical marvel. Computer-generated animation has evolved significantly since the early seasons of The Clone Wars, and The Bad Batch looks gorgeous. In particular, the animation team skillfully renders environmental elements, like lighting, fire, and smoke. Even when the storytelling feels a little tired and hackneyed, the show is visually striking. There is fantastic work from directors like Saul Ruiz and Nathaniel Villanueva.

The animation often elevates tired and formulaic setups. The season’s eleventh episode, “Metamorphosis,” is an affectionate riff on classic monster movies, a spiritual and literal sequel to the contentious “Zillo Beast” arc from The Clone Wars. However, Ruiz’s direction makes excellent use of lighting and elemental effects to create a compelling atmosphere. The season’s seventh episode, “The Clone Conspiracy,” is one of the best written of the set, but it is elevated by Villanueva’s film noir-inflected direction and Kevin Kiner’s suitably moody score.

The show’s other notable creative accomplishment lies in its central cast. The bulk of the ensemble is voiced by a single performer, with Dee Bradley Baker providing the voices for all the adult members of the heroic military unit. The show’s only other credited lead is Michelle Ang as Omega, the young female clone in the group. There are extended sequences of The Bad Batch that consist of Baker talking to himself, playing variations on the same character.

It has been said before but is worth reiterating: Baker’s work is incredible. Baker is able to imbue each of the title characters, and a variety of other clones like Rex and Cody, with distinct personalities and mannerisms. After years on The Clone Wars, it is easy to take Baker’s range for granted. In some ways, The Bad Batch works best as a piece of experimental voice acting theater, as a showcase for the flexibility and versatility of its credited lead.

This strength is also perhaps a limitation. There is a wry joke baked into the premise of The Bad Batch. The team is composed entirely of the sorts of archetypes needed for a series like this. Hunter is the team’s no-nonsense leader. Wrecker is the sweet-but-dimwitted team muscle. Tech is the science guy. There is perhaps a redundancy between Tech and Echo, the team cyborg, and the second season acknowledges as much. Omega is the obligatory cute kid team mascot.

The Bad Batch is built around a somewhat cynical take on this classic team template, the understanding that none of these archetypes are especially distinct. After all, the Bad Batch comprises just five different variations on the same basic template. They are literally clones of one another, with each given a single defining attribute to distinguish them from the rest of the set. It’s a clever angle on the classic team adventure template, but it is also a very limiting one.

The Bad Batch is the weakest part of The Bad Batch. None of the show’s five central characters have any real depth or complexity to them, and the structure of the show means that the audience has to spend a lot of time with them. They might work better as one recurring element in a larger rotating anthology series like The Clone Wars, but the show feels just a little too cliché and a little too archetypal for its own good. The characters and their adventures seem a little too assembly-line.

The Bad Batch seems to understand this. Of the 14 episodes screened for critics, the best three break away from the team-on-a-mission structure to explore the ascent of the Empire. Two of them, “The Solitary Clone” and “The Outpost,” focus on former team member Crosshair (also Baker), who split from the group and affirmed his loyalty to the Empire. The third, “The Clone Conspiracy,” sets up a mystery the team investigates in the following episode, “Truth and Consequences.”

These episodes serve to pull back from the familiar clichés of the “wandering hero” narrative to explore an interesting space in the Star Wars timeline, as the clone army from Attack of the Clones gives way to the Imperial stormtroopers of the original Star Wars trilogy. It is a moment of great political instability, as the universe transitions from one form of government to another. It is a compelling thematic and narrative hook, built around an interesting lacuna in Star Wars continuity.

Narratively, it is interesting to wonder how the Empire transitioned from an army of clones to an army of conscripts, as well as what happened to those soldiers who served with such loyalty. Thematically, it builds on George Lucas’ reworking of the Clone Wars as a metaphor for American intervention in Iraq or Afghanistan. With recent American withdrawals from Iraq and Afghanistan, what happens to the veterans of those conflicts? Is America meeting its obligations to those who served?

These are heady and ambitious themes for an animated series set within the Star Wars universe, but The Bad Batch tackles them in earnest and compelling ways. Repeatedly over the course of the season, clone troopers wonder what will happen to them following the end of the war against the Separatists. Ironically, these debates are most pointed and compelling in the episodes that don’t feature the Bad Batch themselves, instead focusing on characters who can actually change and grow.

The Bad Batch often feels like two very different shows caught in a tug of war. The first is an episodic adventure about a bunch of broadly drawn ragtag outlaws who wander through a variety of uninspired-but-affectionate homages to classic pulpy adventure narratives. The second is a more thoughtful meditation on the way in which societies casually discard the soldiers who have given so much for the cause when it becomes politically expedient.

One of these shows is frustratingly generic; the other is truly compelling. Season 2 of The Bad Batch finds itself trapped in the crossfire.

Related: The Bad Batch Season 2 Voice Acting Cast on We Got This Covered