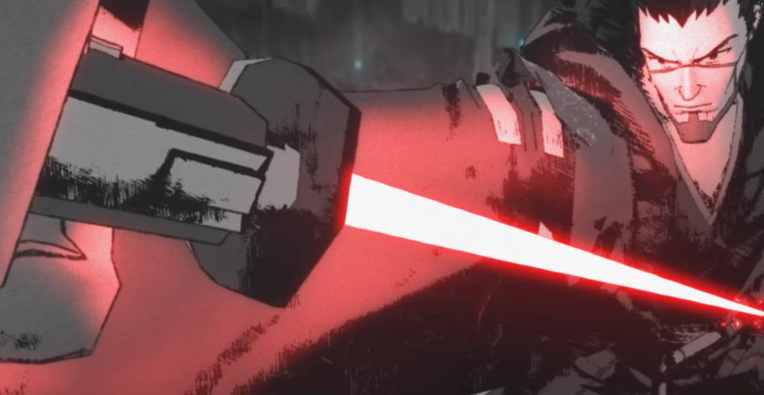 Disney’s Star Wars anime anthology collection, Star Wars: Visions, just gave us a first look at a galaxy far, far away in an all-new style with an explosive Disney+ trailer. In fact, there are actually two trailers — one with English audio and the other with Japanese audio. Seven Japanese animation studios came together to create the show’s nine episodes, showing the Star Wars universe in a collection of unique art styles. You can get a taste of Star Wars: Visions before it comes to Disney+ on September 22, 2021 in the trailer below.

The nine Star Wars: Visions episodes will be available to watch both subtitled and dubbed, with the names “The Duel,” “Tatooine Rhapsody,” “The Twins,” “The Village Bride,” “The Ninth Jedi,” “T0-B1,” “The Elder,” “Lop & Ochō,” and “Akakiri.” When the anthology series comes to Disney+, it will reach fresh corners of the galaxy with new stories and characters. However, familiar faces will appear, too. Infamous bounty hunter Boba Fett is among the returning characters, with his live-action actor, Temuera Morrison, reprising his role for the anime as well.

The rest of the English cast includes major names like Inception’s Joseph Gordon-Levitt playing Jay in “Tatooine Rhapsody,” Gone Girl’s Neil Patrick Harris playing Karre in “The Twins,” Shang-Chi and the Legend of the Ten Rings star Simu Liu playing Zhima in “The Ninth Jedi,” and Stranger Things’ David Harbour playing Tajin in “The Elder.” You’ll also catch Star Trek’s George Takei as Senshuu in “Akakiri,” as well as The Boys’ Karen Fukuhara as F in “The Village Bride,” with so many others providing their talents throughout the show, too.