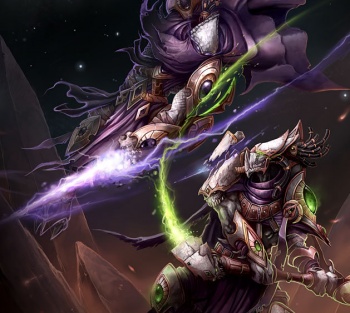 According to Blizzard’s Chief Operating Officer Paul Sams, beta testing for StarCraft II and a revamped version of the Battle.net multiplayer service are just months away

Back in January, we reported that Blizzard had set an internal date for the StarCraft II multiplayer beta – but that they weren’t telling anybody else when it would be. According to Kotaku, though, the timeline has been somewhat narrowed down to “in the next few months.”

Granted, this isn’t that much less vague. Given the plural of “months,” we know it’s more than one month away, but less than twelve – because that would be a year. So, according to Sams, we could be seeing the betas hit anywhere from April 2009 to January 2010.

Of course, that’s being a bit facetious. At last year’s BlizzCon 2008, attendees were given a card that would register them for an upcoming Blizzard beta test, in a very *coughcoughwinkwinknudgenudge* manner that suggested the game in question would be SC2. While Blizzard hasn’t said anything about a BlizzCon 2009 yet, it seems reasonable to guess that they wouldn’t start the beta any later than a year after last October’s event – so we can lop another few months off the estimate.

My guess? I think we’ll see the SC2 beta hit sometime in May or June – July at the latest – with the first installment, Wings of Liberty, hitting shelves just in time for the 2009 holiday rush. As for the other two StarCraft II installments and Diablo III? Your guess is as good as mine (and here’s crossing fingers that we’ll get D3 in 2010).

The information about a new iteration of the tremendously successful Battle.net, though … well, we already knew that they were planning on monetizing it in some way, though won’t be turning it into a subscription service. One wonders what sort of changes they will be making.