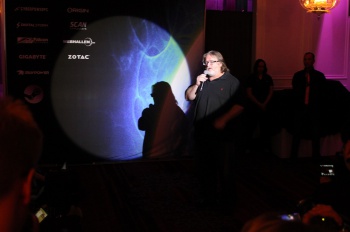 The Steam Controller is not only lightweight, but rife with functionality.

Valve has officially taken the wraps off of the full Steam Machine lineup. A bakers dozen hardware manufacturers, including the likes of Origin PC, Alienware, Falcon Northwest, and CyberPowerPC, were on hand to show off their take on the future of PC gaming. Some of the PCs look all too familiar, using cases you can buy on Amazon and the like today. Where those might be a bit of a disappointment, there were a handful of fresh designs on display, and many of these new custom solutions are tailor-made for the living room.

But let’s pump the brakes on the machines for a moment and talk about the Steam controller, because it’s a breathtaking piece of hardware. This is my first time using one, and it’s hard to emphasize how light this controller is. The heft you usually get with a battery-laden console controller is non-existent, despite the dozen-plus buttons on the device. It’s also incredibly intuitive – it took one or two rooms in Portal to get acclimated, and then I was bouncing around like I was on a mouse and keyboard setup. The Steam controller is a fantastic marriage of controller simplicity and mouse & keyboard customization and comfort.

Back to hardware! Alienware is picking up the Living Room torch from Valve, without a doubt. No hard specs are available yet, but their Steam Machine will have some sort of Nvidia graphics solution, paired with an Intel CPU (probably 4th gen/Haswell). Pricing is also a mystery, but looking at Alienware’s X51 and its pricing should give you a good idea of where this lower-power machine will sit on the pricing scale.

Origin, on the other hand, seems to be going the raw power route, as they normally do (and should). While their case designs for the Steam Machine lineup aren’t new for CES, they are going to pack quite a wallop with the usual high-end/flagship Intel-Nvidia components.
The excitement surrounding this new Steam Machine movement is certainly not misplaced, but the long-term emphasis, as with any other PC hardware, is going to be on innovation and customer support. None of the internal hardware in any of these machines is Wheel, Reinvented-caliber, so the external look and feel will go a long way. And what good is a PC if the customer support behind it is so lackluster? This is why boutique companies like Origin PC and Maingear are thriving, without a doubt.

Now, the bad news: Seemingly none of the hardware on display is going to be available in the first half of 2014. Most of the manufacturers are saying “talk to us at E3,” so expect a ton of hard specs and pricing in June.