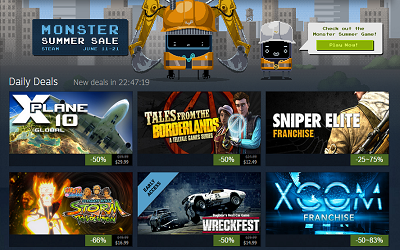 Crack open your wallets gamers because it’s June 11th and, as we reported back in May, the Steam Summer Sale has arrived!

The sale began just a little while ago and opened with a cluster of deals discounting a number of games and franchises anywhere from 25 to 80 percent. Included among the sale’s opening deals are titles such as the Metro games, the Homeworld: Remastered Collection and XCOM. In addition to the standard deals, Valve has also debuted a new “Monster Summer Game” that customers can apparently play together to unlock more special discounts. We tried to play said game to provide some impressions but, unfortunately, weren’t able to get in. In addition to all of this, the sale includes the usual mix of shifting flash deals which will refresh “every 12 hours.”

Just personally, I’ve already spotted a few games that I’ll probably be picking up. The PC version of Valkyria Chronicles, for instance, is only five dollars right now, which is an insane deal if you’re a fan or turn-based RPGs or Japanese RPGs in general. Darkest Dungeon is currently also 25 percent off and, from what I’ve heard, would be more than worth tossing a few more dollars into Valve’s overflowing cash pot. Take a peek at the current offerings and let us know which games you want to get and which you hope to see discounted in the days between now and the sale’s end on June 20th.